A Good Idea Can Take You Far 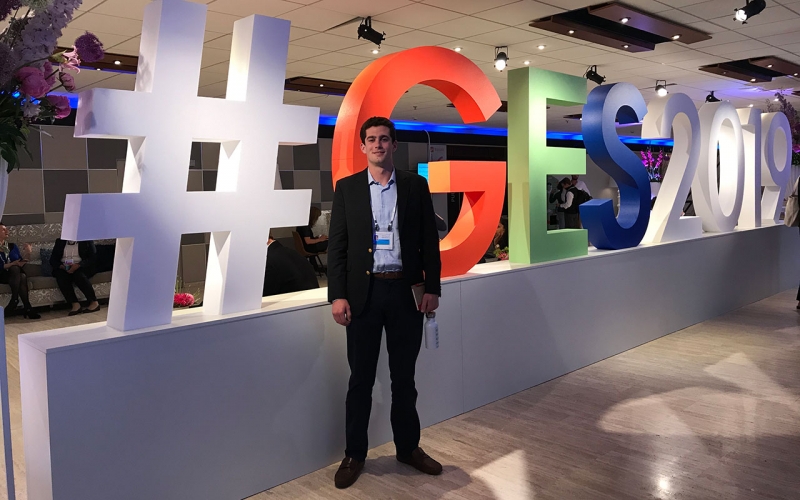 Nick Yehle ‘20 of Lake Forest, Illinois, has been developing a business idea for a year now. He brought his idea to 3 Day Startup, a weekend opportunity to experience the startup process and receive mentoring, feedback, and coaching from seasoned entrepreneurs, hosted by Denison’s Red Frame Lab.

“Nominating Nick was an easy decision. His passion for his idea (CoffeeStraw) was easily visible during the 3DS Denison program. There was a level of thoughtfulness and energy behind the way he spoke about CoffeeStraw that was contagious. That, in combination with the environmentally conscious nature of his venture, made Nick a natural choice for the Global Entrepreneurship Summit,” says Bradford.

Nick was thrilled by the invitation and seized the opportunity. During the summit, Nick networked with entrepreneurs and investors and heard from Secretary of State Mike Pompeo, the Queen of the Netherlands, and other leaders and entrepreneurs on topics like pitching, strategy, planning, energy, connectivity, water, agriculture, and health.

The opportunity energized Nick, reflecting: “The biggest thing I took away from the experience is that at the end of the day, you are you. You have your experiences, your dreams, and a place you want to be – it is your prerogative to make it happen.” He continues, “If you have something to say, and say it proudly and confidently, people will listen to you and if you know you are doing the right thing, everything works out.”

These opportunities through the Red Frame Lab, 3 Day Startup, and the Global Entrepreneurship Summit have helped him continue to refine his idea and build stronger skills in pitching, the startup process, and prototyping. After graduating from Denison, he hopes to grow his business and brand it into success.

As a true entrepreneur, he isn’t afraid of failure: “In reality, there is a 99% chance that my company will fail. I have a long list of other ideas and ways to make the world a better place that I would love to launch and see grow.” He attributes this versatility to the liberal arts, saying “Denison has taught him different lenses to use when looking at everything, to learn what is really going on. Being a student of economics and computer science puts me in a place of great flexibility in terms of a career path.”