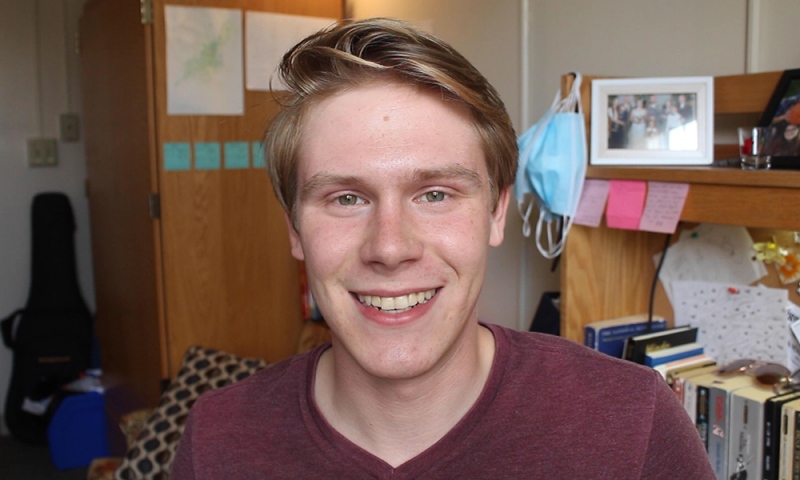 This year, despite the pandemic, marks the 45th Department of Cinema’s Annual Denison Film Festival. Marc Wiskemann, Associate Professor and Cinema Department Chair, as well as Meshach Malley ‘22, a cinema major, share their excitement for this year’s festival. “Everyone is really excited that we’re going to be able to have a Film Festival screening this year,” shared Wiskemann. “The films that were made in 2019-20 school year were never screened because everything went remote that spring and the Festival got canceled, which was disappointing for everybody. The students this year are working harder than ever though and, while students almost always shoot live-action, we have two animated films this year and the whole lineup is looking really strong.”

Describe your experience in preparing for the Film Festival- Where did you start? What were some obstacles you faced?

The Denison Film Festival grows out of the Cinema 419 Film Workshop class. This is an elective Cinema course that students can take once they have finished all of the other production courses. In the class, we each spend the semester producing a film. The festival in May is the culmination of this, all of the films from this class showcased together.

To do this, we started thinking about the festival as early as the first day of class. Once we knew when it was taking place, it gave us a hard deadline for when our films needed to be ready to show to the public. A semester may seem like a long time but remember that you have to come up with an idea that you know that you can actualize, write a script, revise it, plan out the shoot, actually shoot the film, edit, sound design, and have it ready to be shown by May — there isn’t much room for procrastination. This year, in particular, we had to follow all of the COVID restrictions while we were producing our films. This meant very few actors, nearly no help in terms of having a crew, and not able to share equipment. We had to write scripts that we knew we could shoot on campus and still make them look like a professional piece of art. The hardest part was just moving equipment. For a film on a scale of 8-15 pages, you need hundreds of pounds of lighting equipment, cameras, and sound gear to create a film.

What have you learned through this experience?

From this experience, I have learned how to work on my own when I have to and rely on others when I can. For most of the actual shooting, I was the only one moving the lights, camera, and other gear while I was directing the actors in the scene. At the start of the production, I found myself paying more attention to the technical side of things, but as the shoot went on, I was able to streamline my technical process and spend more time focused on the actors. On the flip side, it has also been really helpful to work with other people when I can, be it talking about the story that I am trying to tell or thinking about a particular location that would fit well with the piece

Can you tell us about a favorite memory, class, or professor in Cinema?

This class has been my favorite of the production classes here at Denison. Professor Wiskemann helps to lead us in our journey, but he is not telling us what to create or not to create. He is there when we have questions, concerns, or problems and helps us to make films that have an emotional impact. Everyone is just trying to help each other make the best films that they can. We are beyond so many of the nitty-gritty technical conversations and have moved on to really focusing on the emotions of the art. It doesn’t feel like I am being taught things explicitly but looking back on where I was at the beginning of this semester, I realize that I may have learned more than in almost any of the production classes prior to this. It is all about figuring out how to tell the story you are thinking about on Denison’s campus with very few actors and nearly no crew. It has been an incredibly enjoyable and rigorous experience. As a junior, I am looking forward to taking this class again in the fall!

The Film Festival is open to Denison students, faculty, and staff on Saturday, May 8 at 7:00 pm and 9:00 pm, and advance tickets are required. The films will simultaneously drop online for those who cannot attend in person.