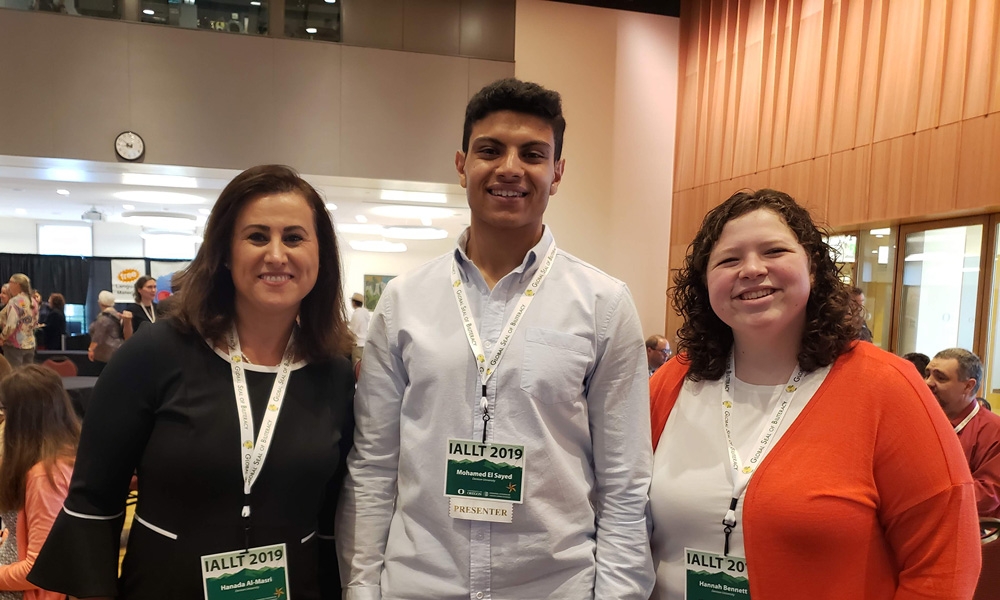 Giving a presentation to a large roomful of strangers is not high on most people’s lists of enjoyable moments. But presenting at an international conference about a topic that is NOT your major — now that’s tough, right?

But strangely enough, this was a really positive experience for both Hannah Bennet ’21 and Mohamed El-Sayed ’20. The two traveled to Eugene, Oregon, in June of 2019 to offer their Arab-American research at the International Association for Language Learning Technology at the University of Oregon.

In fact, Bennet, a cinema major with a concentration in queer studies, was surprised by how UN-nervous she felt. In the days leading up to the presentation, she was more nervous about making her flight connections than presenting. It wasn’t until she finally boarded the plane, that it hit her.

“Fortunately, it went well,” she says. “We had a crowded room, and everyone there seemed interested in what we had to say. We have an awesome project. I think our audience felt that in our presentation. This experience has given me the confidence to do this kind of thing again and to feel more confident when talking about the work I have done in the future.”

So, what did they present about? The two were part of a class that connected Denison students to an Arab community. They interviewed families over time and compiled an oral history that is now part of an archive.

Hanada Al-Masri, associate professor of Modern Languages and director of the Middle East and North African Studies concentration, created the project to introduce her students to the diverse cultural, social, economic, linguistic and educational backgrounds of the Arabic community.

Al-Masri notes the project achieves a lot of goals. In addition to helping students gain proficiency in Arabic, it “equips students with the skills necessary to conduct oral interviews, ask important questions, dig deeper with great follow-up questions and critically think about claims and calls for action that dehumanize others.”

Even though El-Sayed is a native Arab speaker, he learned a surprising amount during the class. A biology major with a minor in chemistry, Sayaed found it refreshing to use his language in a non-Arabic speaking country but discovered there were some things about Arab community that even he didn’t know.

“I learned that identity formation is far more complex than what we think,” he says. “Even though all the families we met are ‘Arabs,’ they come from different countries with different traditions and cultures.”

And Bennet learned a lot that is helpful to her as a cinema major. “My biggest take away is that being a good listener is not at all about just hearing the words of a story – it’s how to tell the story: body language and thoughtful pauses between questions,” she adds.

“The light shines in a person’s eyes as they think back to their childhood and share their memories. Tears and smiles. Fully paying attention and participating in this conversation is genuinely listening. It’s taking in everything presented and being present as much as possible.”

While opportunities like this are valuable, they aren’t free. Denison provides a range of possibilities to help fund research presentations like this. Both Bennet and El-Sayed received funding through the Lisska Center for Scholarly Engagement and grants that Al-Masri applied for such as the Denison University Research Foundation (DURF) and Patty Foresman fund.

“Without the help of the Lisska Center and Dr. Al-Masri, I would not have been able to attend the conference,” says Bennet. “I work throughout the summer to help pay for school. There aren’t that many additional funds for purchasing a flight across the country.”