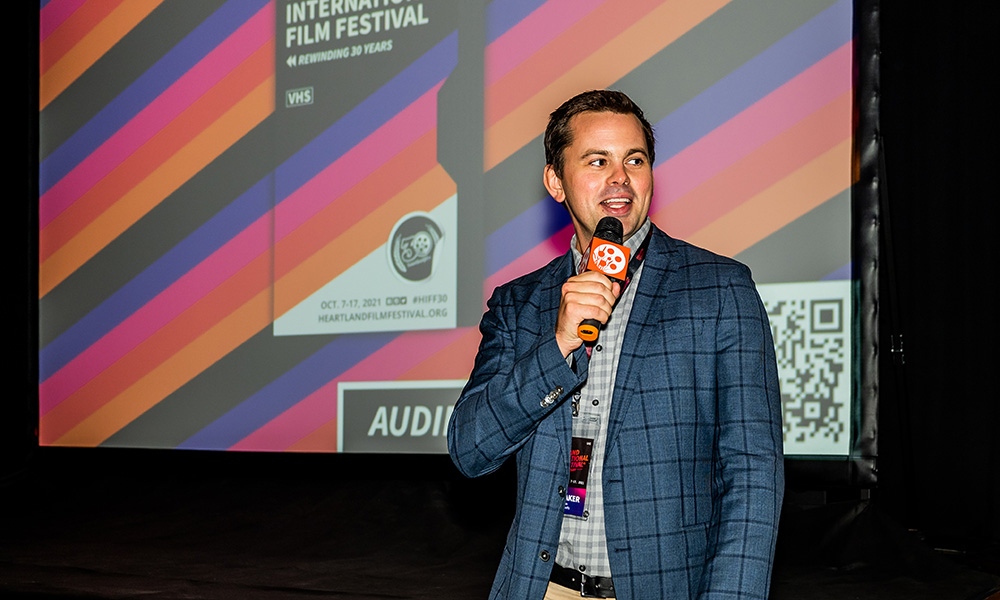 There’s no time to be bleak, but we can still be “real,” says filmmaker Skye Wallin ‘11. His most recent documentary, “American Gadfly,” about U.S. Sen. Mike Gravel’s unlikely 2020 bid for the presidency, just launched nationally, thanks to a collaboration with fellow cinema alum Marty Jones ’86.

Gravel “popped onto my radar in 2007,” says Wallin, who watched the Democrat from Alaska participate in debates about the legitimacy of the Iraq War.

Wallin did some more digging and liked what he saw. “In the 1970s, Mike was at the forefront of fighting to end the Vietnam War. He read the Pentagon Papers, a lengthy secret document that proved the government lied about the war and its causes for decades, into the public record. Mike risked censure, Senate expulsion, and even prosecution for making these documents public, which was extraordinarily courageous.”

In 2019, Wallin was casting around for a project and read a Rolling Stone article about how teenagers were running Gravel’s Twitter account.

“The tweets were wild and progressive,” Wallin says. “They were relentless against establishment figures from both political parties. These students ran Mike Gravel’s 2020 presidential with the goal to get him into the debates and make their points — not to win. It was a perfect ‘in’ to tell Mike’s story through a contemporary lens, building it around young people getting involved in the democratic process instead of ineffectually whining.”

After the film was complete, Wallin reached out to Jones, a filmmaker and studio director at Austin Film Society, for help finding a sales agent to strategize the release of the film, as well as a distributor for the film. Wallin ended up employing Jones and his partner for the work.

“Collaboration is the key to the filmmaking process. We sold the film to Gravitas Ventures and it was released across North America on January 4,” Jones says. “The movie suggests that Gravel had more substance than better-publicized long shots,” reads a New York Times review of the documentary.

“I hope people see that fighting for what you believe in can be a fun venture,” says Wallin, who wants viewers to see the optimism in Gravel’s story.

“The kids in the film are upset that their views aren’t being expressed in the political landscape, so they decide to ‘jump in’ the arena themselves,” he says “It’s an incredible testament to the possibility of engagement and action in an increasingly challenging and polarized world.”

Wallin’s next project is a documentary series that follows scientists entering water contamination disasters and finding solutions. The film will cover a range of water crises, including oil spills, lead poisoning, algal blooms, and irrigation poisoning. Wallin will bring to light “a lot of fun characters and a focus on solutions. I don’t want people to be depressed watching my work.”