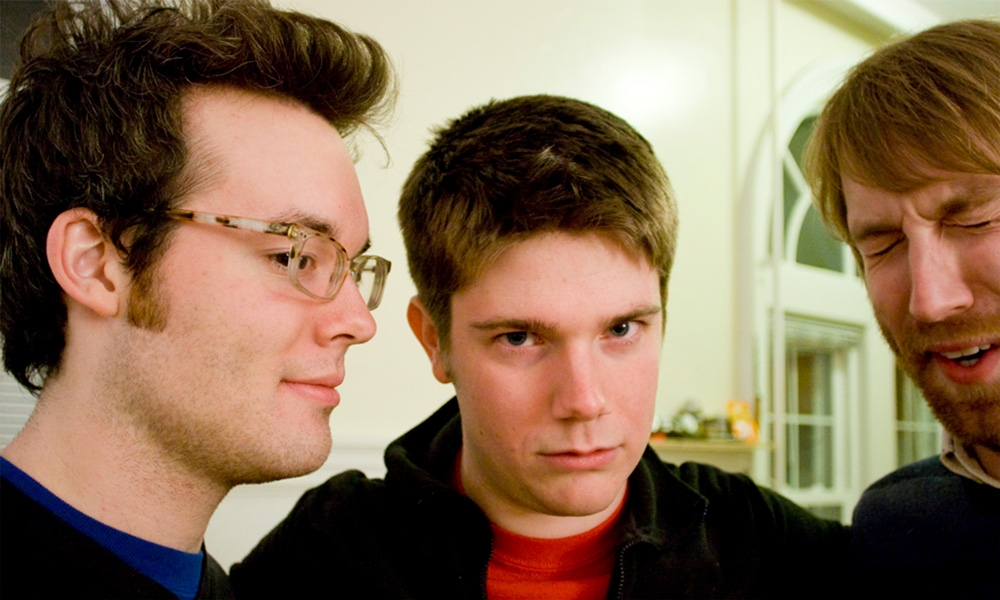 Nick Bailey, Evan Hill and Marc Sloboda during their days at Denison

Friends Nick Bailey, Evan Hill, and Marc Sloboda — all from the Class of 2009 but from three different majors (cinema, English, and theatre) — were just trying to make each other laugh or, with any luck at all, make an audience laugh during their time at Denison. Even after graduation they were creative, writing one-act plays and throwing up video shorts on YouTube.

Funny thing is, that takes a lot of hard work. And it’s paid off with Temporary Humans, a pilot script for an animated series they’ve written for Fox — with Hollywood actor and producer Will Arnett attached to it as a producer.

The script was picked up in October 2019, but they began building it out earlier that year. Prior to that, the three had actually been working together on another project, a series of video shorts called Omega House, which ended up winning Best Animated Project at the New York Television Festival in 2018. It also scored them a development deal with Comedy Central.

“We submitted it, and I was so used to being rejected by everything that I was like, ‘Well there goes $100,’” Sloboda, the cinema major, says. “But we got managers out of that project, and we’re represented out in L.A. now.”

They went to L.A. for a few days for the Comedy Central project, building out the characters in the story and writing a pilot script. It turns out, this was the end of the line for that project. But their managers helped them stay in the conversations and kept them top-of-mind for people in the business.

“Stuff like that happens all the time,” Sloboda says. “We’re learning that most people working out there have a ton of irons in the fire at any given time.”

The idea for Temporary Humans came about as a teaser at the New York Television Festival. It’s about a hapless 20-something-year-old named Jake who rescues a naked amnesiac, named Sammy, from a lake and makes him his roommate. But neither one of them knows that Sammy is an alien, and both of them have to work these dead-end jobs through a temp agency.

The trio’s managers suggested pitching the concept in L.A., taking 16 meetings with different studios early last year in the process. They paired with Electric Avenue and Sony after that epic run of meetings, then developed the idea with them until October 2019. Finally they headed back to LA for seven more pitches and were bought by Fox.

“This is all new for us,” Sloboda says. “When we started with the Comedy Central deal, we had no idea what we were doing. We just made something funny, but had no idea how TV works.”

“We went into our first meeting on our very first day in L.A., after our managers told us that none of these meetings were pitches. They said, ‘Just go in there, talk about yourselves, and you’ll be fine.’ The people walked into the room, sat down, and said, “Alright, are you guys here to pitch something?” Yeah, I just froze. We just verbal diarrhea-ed our way through the first pitch. That was about as bad as it got. I still wouldn’t say we know what we’re doing, but we know more than we did a few years ago.”

Sloboda’s only been animating for about two years now. And he’s self-taught. He bought some books, sat down, and just read and learned.

“Marc’s one of those guys who just decides to learn something, and then he’ll learn it,” Hill, the theatre major, says. “So, yeah, Marc’s been animating for about two years, and then Nick and I have been really good at watching him animate for about two years. It’s a nice balance.”

Hill and Bailey write, and voice scenes. “They voice it because they’re much better actors than I am,” Sloboda says.

Bailey and Hill had a couple of classes together freshman year, and then joined Burpee’s Seedy Theatrical Company, Denison’s improvisation group that Steve Carell ’84 was also part of. Hill and Bailey were the actors in a lot of Sloboda’s films at Denison, and all three wrote plays, so they had a chance to work on lots of projects together.

Sloboda wanted to get into comedy, so he offered to hold the camera for the guys and do more of the technical side of things. “I think the major change was that I put the camera on a tripod,” Sloboda says. “From there, we just started working together.”

Some of the comedy from Temporary Humans is mined from the group’s early days in Chicago, when none of them had any jobs lined up and were temping through an agency. They all maintain day jobs now while they continue doing what they love. In addition to Temporary Humans, they are planning to find a home for the Omega House project with another company, and they’re also working on something new that’s not fully developed yet.

“It’s a cliché, but I would do this if nobody paid me because I have been doing it and nobody’s been paying me to do it until very recently,” Sloboda says. “We’ve been working at this pretty constantly for over 10 years now, so you have to have persistence.

“We’re not guaranteed to be on the air and even that’s probably a long shot. But, I mean, we’re set up at a network now, which is pretty huge. The door’s open for us now, and even if this doesn’t end up being on TV, it’s still another huge step in the right direction.”