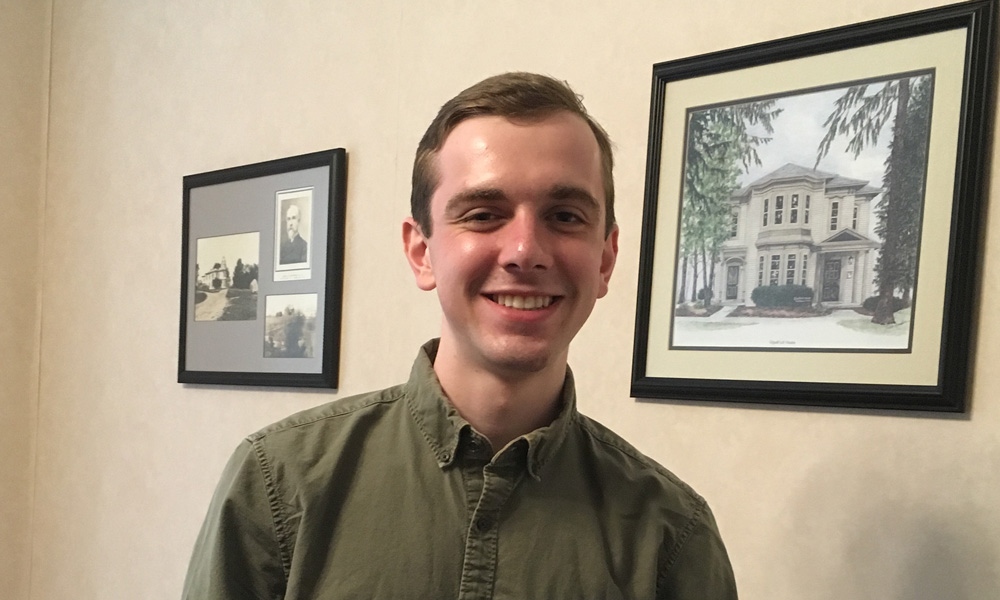 Recent Denison graduate Jimmy Fennessey ’19 has been awarded a Boren Scholarship to study in Jordan during the 2019-20 academic year. Fennessey will study Arabic at the Qasid Institute in Amman in preparation for a career as a political officer specializing in the Middle East. This will be his second study-abroad experience in the Middle East nation.

A native of Grosse Pointe, Michigan, Fennessey graduated with a double-major in mathematics and music performance (cello). He began learning Arabic in the spring of his junior year while studying abroad in Amman, Jordan. He loves the way Arabic “combines the deeply logical nature of mathematics with the artistry and beauty of music.”

While in Jordan, Fennessey practiced his Arabic skills by “talking to my taxi driver as much as I could, depending on how much English and Arabic he and I relatively knew. Our conversations covered all facets of America’s relationship with the Middle East.” He also volunteered with a nonprofit and developed and taught an English class for Syrian refugees.

Fennessey continued his Arabic studies in the summer of 2018 during an intensive course at the University of Michigan, where he learned a year of Arabic content in just two months. During his senior year, Fennessey pursued an independent Arabic translation project with Modern Languages professor Hanada Al-Masri.

Pursuing fluency in Arabic, Fennesey won a Critical Language Scholarship (CLS), an intensive summer language and cultural immersion program for American students. He is spending the summer of 2019 in Meknes, Morocco, studying both Modern Standard Arabic and the local Maghrebi Arabic dialect known as Darija.

Persistence and an interest in other cultures have been hallmarks of Fennesey’s career at Denison. As a first-year student in 2016, he applied to attend a Fulbright UK Summer Institute. The first sentences of his application essay read: “In 1868, at the age of 11, my paternal great-great-grandfather left his home, Cork, Ireland, to come to the United States. Since then, no Fennessey has ever been back.”

Although he was initially unsuccessful, he wasn’t ready to give up. With some encouragement from the Lisska Center for Scholarly Engagement, he re-applied the following year and received the award to spend four weeks at the Queen’s University-Belfast Irish Studies School.

Fennessey advises college students to do what they want to do, not what others want them to do.  “I actually came in thinking I would be a history major and a music minor,” he says, “but I found myself enjoying math too, and decided to major in it. I still love history, though! As for music, I was putting in the practice and participating in all the ensembles and figured why not just major in it, since the only difference was a few more courses.”

Boren Scholarships, an initiative of the National Security Education Program, provide unique funding opportunities for U.S. undergraduate students to study less commonly taught languages in world regions critical to U.S. interests, and underrepresented in study abroad. Boren Scholars represent a vital pool of highly motivated individuals who wish to work in the federal national security arena. In exchange for funding, Boren Scholars commit to working in the federal government for at least one year after graduation.

David L. Boren Scholarships and Fellowships are sponsored by the National Security Education Program (NSEP), a major federal initiative designed to build a broader and more qualified pool of U.S. citizens with foreign language and international skills. Boren Awards provide U.S. undergraduate and graduate students with resources and encouragement to acquire language skills and experience in countries critical to the future security and stability of our nation. In exchange for funding, Boren award recipients agree to work in the federal government for a period of at least one year. “The National Security Education Program,” according to Dr. Michael A. Nugent, NSEP Director, “is helping change the U.S. higher education system and the way Americans approach the study of foreign languages and cultures.”

In 2019, the Institute of International Education, which administers the awards on behalf of NSEP, received 851 applications from undergraduate students for the Boren Scholarship and 244 were awarded; 273 graduate students applied for the Boren Fellowship and 106 were awarded. Boren Scholars and Fellows will live in 39 countries throughout Africa, Asia, Central and Eastern Europe, Eurasia, Latin America, and the Middle East. They will study 30 different languages. The most popular languages include Arabic, Mandarin, Russian, Portuguese, Swahili, and Hindi. “To continue to play a leadership role in the world, it is vital that America’s future leaders have a deep understanding of the rest of the world,” says former U.S. Senator David Boren, the principal author of the legislation that created the National Security Education Program and the scholarships and fellowships that bear his name. “As we seek to lead through partnerships, understanding of other cultures and languages is absolutely essential.”

Since 1994, over 6,000 students have received Boren Awards. Boren Scholars and Fellows represent a vital pool of highly motivated individuals who wish to work in the federal national security arena, and program alumni are contributing to the critical missions of agencies throughout the federal government. An independent not-for-profit founded in 1919, IIE is among the world’s largest and most experienced international education and exchange organizations. Undergraduate and graduate students interested in applying for the Boren Awards should contact IIE at boren@iie.org or visit www.borenawards.org.

CLS is part of a wider government initiative to expand the number of Americans studying and mastering foreign languages that are critical to national security and economic prosperity. CLS plays an important role in preparing students for the 21st century’s globalized workforce and increasing national competitiveness.

Recipients of the 2019 CLS awards include students from more than 230 institutions of higher education across the U.S., including public and private universities, liberal arts colleges, minority-serving institutions, military academies and community colleges.

Since 2006, CLS has awarded scholarships to more than 6,200 American students to learn critical languages around the world. CLS scholars are among the more than 50,000 academic and professional exchange program participants supported annually by the U.S. Department of State’s Bureau of Educational and Cultural Affairs.

The CLS program is administered by American Councils for International Education.