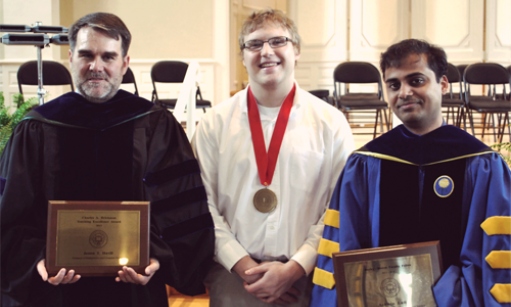 The citation said of Dr. Havill, “A veteran professor emphatically describes Jessen as ‘one of the top quality teachers and scholars on this campus, truly first rate and a ‘work horse’ in the best sense of the word,’ spending long hours preparing his courses, mentoring students, collaborating with colleagues and stewarding the development of the curriculum.”

The Brickman Teaching Excellence Award was established in 1997 in honor of Denison trustee Charles A. Brickman ’54. Nominees must be tenured members of Denison’s teaching faculty who are models of commitment to teaching and who also have strong records of dedication to students inside and outside the classroom. Recipients must have demonstrated a vibrant interest in the learning process, as well as an understanding of teaching as a continuously evolving art form: someone who embraces the teaching and mentoring of students, not just as a profession, but also as a calling.

The Bayley-Bowen Faculty Fellowship, awarded to Dr. Lall, was established in 2004 to honor the life-long personal and professional relationship between two of Denison’s Life Trustees, David Bayley and William Bowen. The three-year fellowship is meant to recognize and encourage continued superior talent and outstanding scholarship and promise on the part of an untenured assistant professor who has just completed a successful third-year review.

“Nat, you have been described in terms of a ‘rare combination of intellectual giftedness, academic skill, athletic prowess, curiosity, generosity, maturity, and an incredibly strong work ethic.’ As a double major in computer science and mathematics, you demonstrated a passion for your disciplines that inspired professors and peers alike, and skills that reflect doctoral quality….

On the national stage, you were one of only ten computer science majors to receive a 2012 Barry Goldwater Scholarship, and one of only four Division III defensive lineman to be named to the first-team Academic All-America squad. Having made the second team the year before, you are one of just 13 Denisonians to receive the honor multiple times.

Nat, as your coach describes, you are the epitome of the scholar-athlete, and we're confident you'll take your A-game as you begin your Ph.D. work in computer science next year at Duke University.”