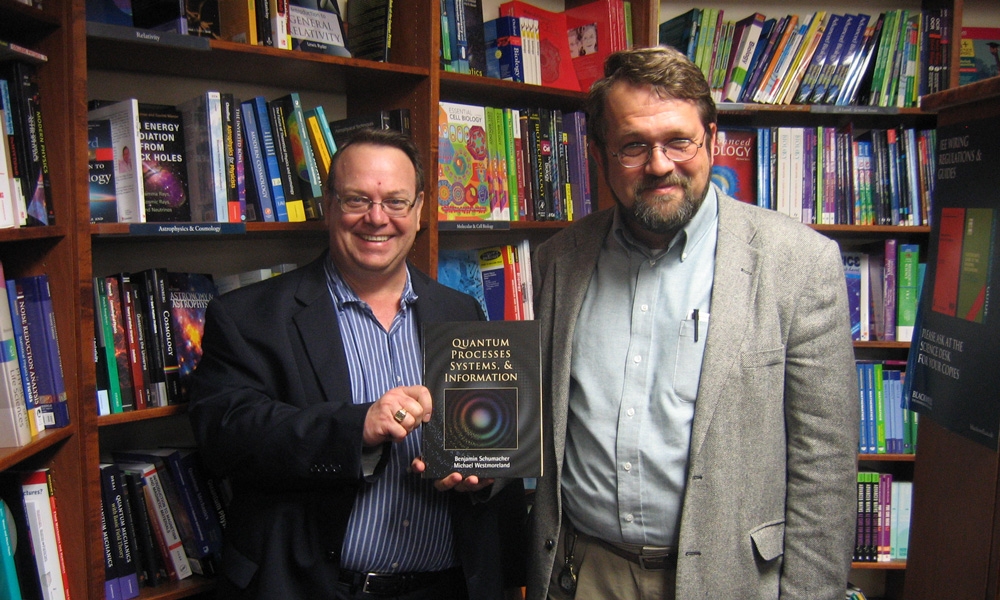 Playfully dubbed ’Thermo-Demonics,’ a new approach to physics that focuses on the meaning of observation could bring new insights to thermodynamics, the science of heat, and quantum theory, the set of laws that govern the microrealm.

The framework, which is being developed by Denison mathematician Michael Westmoreland, and physicist Benjamin Schumacher, at Kenyon College in Gambier, Ohio, was given this devilish moniker by their colleagues because it put information at the center — along with a hypothetical, microscopic observer known as Maxwell’s demon. With the help of an FQXi grant of over $70,000, Schumacher and Westmoreland hope it will also enable them to remove the confusion over measurement and uncertainty in quantum theory.

Schumacher and Westmoreland realised they were kindred spirits in the 1990s. Both were interested in how information theory could help illuminate quantum mechanics and began to collaborate.

In the quantum realm, observers typically know very little about where a particle is, or how fast it is moving, or how it is spinning. They have to make a measurement to reduce that uncertainty. In information theory, likewise, the information you gain when you learn something about a system is mathematically defined to be the reduction in your uncertainty about it.

If you have a single ASCII character, for example, but only know that it is alphanumeric, there are 62 possibilities: 26 lowercase letters + 26 uppercase letters + 10 digits. But once you learn that the character is, say, F, you reduce the uncertainty from 62 to 1, and gain a corresponding amount of information.

At the same time, however, quantum theory contains a mystery that has haunted physicists since its development in the 1920s. All the quantum uncertainty about a system is encoded in its wavefunction: a mathematical entity that evolves with time in a perfectly predictable manner—so long as you leave it alone. But the instant you make that measurement, the wavefunction collapses into one possibility or another—and there is no predicting with certainty which one. All you can know in advance is the probability of obtaining a given outcome.

Making sense of this measurement problem is the “most fundamental problem in all of quantum mechanics,” says William Wootters, a physicist at Williams College in Williamstown, Massachusetts, and a pioneer of quantum information theory.

Schumacher and Westmoreland have taken on that challenge. By the mid-2000s, they were trying to codify their work and that of many others in an undergraduate textbook on quantum mechanics from an information point of view (Quantum Processes, Systems, and Information (2010)). “In the process of writing,” says Westmoreland, “I started wondering if information is more fundamental than probabilities.”

That question led the two researchers to start thinking harder about the physics of the observer. They formulated the notion of an ’eidostate’—”a description of the world that exists as a physical state, and in which changes involve physical processes,” says Schumacher. (The name comes from the Greek word ’eidos’ meaning “to see.”)

“I started wondering if information is more fundamental than probabilities.”

They decided to test the usefulness of eidostates by first applying them to thermodynamics — a branch of physics that also deals with deep limits on what observers can know.

Their starting point was a conundrum originally pointed out in 1867, when the Scottish physicist James Clerk Maxwell proposed the following thought experiment: Imagine that a sample of gas is contained in a box that is divided down the middle by a partition. Imagine further that there is a trap door in the partition operated by a tiny being “whose faculties are so sharpened that he can follow every molecule in its course.” If the being saw a high-energy molecule approaching the partition from, say, the left half of the box, it could briefly open the trap door to let that molecule pass through to the right side. And likewise, it could let low energy molecules pass through from right to left. Over time, Maxwell argued, the average energy, and thus the temperature, would increase on the right and decrease on the left. Or to put it another way, the being could cause heat to spontaneously flow from cold to hot—a violation of the Second Law of Thermodynamics, which says that heat will spontaneously flow only from hot to cold, and not vice versa.

Maxwell left this paradox to later generations of physicists as a kind of homework assignment: Where was the flaw in this thought experiment? What would keep Maxwell’s ’demon,’ as other physicists took to calling it, from violating the second law? Did the demon’s ability to observe, think, and act change the fundamental physics in some way? Or was its ’intelligence’ still governed by natural law?

The solution that’s most widely accepted was given in 1982 by IBM physicist Charles Bennett, who based it on work that the late IBM physicist Rolf Landauer published in 1960. Yes, Bennett argued, a demon could, in theory, create an apparent violation of the second law through a completely automated process that required no intelligence whatsoever — but only if it retained information about every interaction with every molecule it had ever encountered. Once it started erasing that information, as any finite automata would eventually have to do, it would release energy back into the environment at exactly the rate (prescribed by ’Landauer’s principle’) required to preserve the second law.

A lot of physicists took Landauer’s minimum energy limit as a challenge, and immediately started pointing out special situations where it could be violated, notes Bennett. To clarify the resulting confusion, Schumacher and Westmoreland reworked Landauer’s principle into an elegantly simple formulation of the second law that took all the exceptions into account: No physical process can have as its sole result the erasure of information. Then they used their eidostate concept to do a careful analysis of the physics of observers, be they macroscopic humans in the lab, or microscopic demons.

Bennett vividly remembers first hearing about the new formulation in 2013, when Schumacher gave a talk at the Institute for Quantum Computing, in Waterloo, Ontario. Schumacher showed that “all the exceptions weren’t real, just apparent,” says Bennett, because they all involved some kind of external change in, say, energy — precisely what the new formulation ruled out.

Schumacher’s words “had a very salutary effect,” recalls Bennett. He notes that Schumacher and Westmoreland, who are both at smaller schools that emphasize teaching, had simplified elements of thermodynamics—”just the way it should be in a textbook.”

Since then, Schumacher and Westmoreland have expanded that insight. “What we find is that a few very simple axioms about information can serve as a foundation for thermodynamics,” says Schumacher, “including some things we didn’t expect.” For example, the axioms contain no notion of probability, but they were able to derive a notion of probability from them (A. Hulse, B. Schumacher & M. D. Westmoreland, Entropy 2018, 20(4), 237).

Quantum theory is next in their sights. Eidostates should be well suited to the task, says Westmoreland because “they’re built to accommodate indeterminacy.”

They are as eager as anyone to see where that will lead. “Understanding quantum mechanics is no mean feat — we haven’t done it yet!” says Wootters. “It may be that in order to get there, we’ll have to completely reframe the theory.” If that’s the case, he says, “this particular point of view that Ben and Mike are taking might help us see our way to whatever comes next.”

This article, Thermo-Demonics, was previously published in FQXI. Republished with permissions.