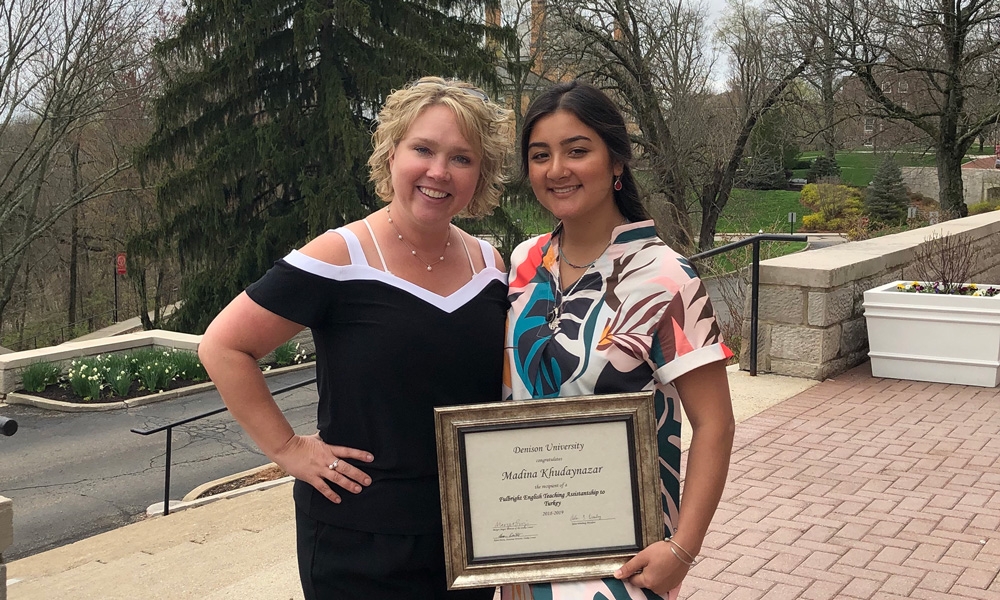 A Fulbright English Teaching Assistantship to Turkey will give Madina Khudaynazar ’19 an opportunity to teach English at the Social Sciences University of Ankara. For Khudaynazar, it’s also a chance to unlock some of her family history.

Khudaynazar, who came to the U.S. as a refugee when she was a child, has deep ties to Turkey, an ancient country that straddles continents and cultures. Recently, Khudaynazar spent a summer visiting relatives there. She found Turkish culture to be similar to her Persian-Uzbek heritage, and during that visit she gained a new perspective of her own family. “I was able to relate to my parents in ways I couldn’t before. I felt like I was discovering the roots of my identity,” she says.

“Being a refugee, relearning and strengthening a language that is similar dialectically gives you pieces of your identity back. I was finally able to see the whole picture of pieces of puzzles my mom would paint for me.”

Khudaynazar’s mother often narrated stories of her own childhood, when she wove carpets with her sisters as they shared lines of poetry from famous Persian poets. “It’s one thing to hear the stories, it’s another to live in a culture that values that art — and to discover the nuances of her experiences.”

“I feel thrilled that I get this opportunity,” says Khudaynazar, who wants to learn a handcraft during her Fulbright experience, “…whether that means learning to weave carpets or creating ceramics that are specific to a region in Turkey. It’s a lost art in the U.S.”

In the midst of the global refugee crisis in 2015, Khudaynazar helped found Refugee Awareness Week (RAW) with her peers. The annual event incorporated renowned speakers, community dinners, and cross-cultural activities.

“RAW is supposed to foster growth in understanding, empathy and caring. I hope that continues and that it will create more informed citizens.”

Khudaynazar has a strong support network that includes several professor mentors. She worked and bonded closely with Laura Russell, associate professor of communication.

“I am awestruck by how Madina made such a deep impact through the multiple opportunities she seized while at Denison,” Russell says. “Driven by empathy, she has a remarkable awareness of cultural diversity and adversity. She reflects critically on her own identity to recognize and honor others’ differences. This sensitivity enables her to communicate across cultures effectively and compassionately. I have yet to encounter a student so consciously aware of diversity who also has the lingual skills to adapt to, interact with, and educate persons from various cultures.”

Khudaynazar was one of 24 students who were awarded international scholarships in 2019. Denison has been named a Fulbright “Top Producing Institution” by the U.S. Department of State Bureau of Educational and Cultural Affairs for three of the last four years. Provost Kim Coplin noted, “These honors and scholarships are extremely competitive. Denison students are up against the best and brightest at institutions across the nation. The fact that our students are so successful in achieving these distinguished awards is indicative of Denison’s rigorous academics that prepare our students for the lives they want to lead.”

The Fulbright U.S. Student Program, funded by the U.S. Department of State’s Bureau of Educational and Cultural Affairs, is the largest U.S. exchange program offering opportunities for students and young professionals to undertake international graduate study, advanced research, university teaching, and primary and secondary school teaching worldwide. The program currently awards approximately 2,000 grants annually in all fields of study, and operates in more than 140 countries worldwide. Khudaynazar received one of 20 English Teaching Assistantship positions in Turkey, and this year’s awardees were among the top 30 percent of applicants.

In addition to her Fulbright English Teaching Assistantship, Khudaynazar received a 2016 Critical Language Scholarship to study Turkish in Baku, Azerbaijan. She earned majors in international studies and communication, with a concentration in Middle East & North African studies.