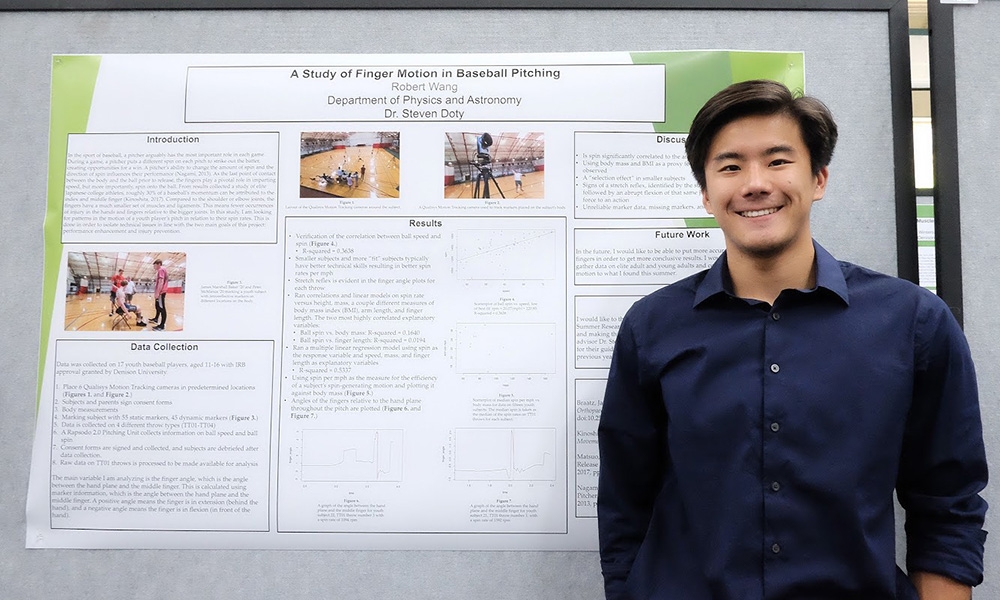 Depending on who you talk to, Bebe Wang ‘20 is a physicist with a passion for swimming — or a swimmer with a passion for physics. Both those pursuits have been intrinsic to his years at Denison. He is now a 5-time national champion, and he has won a $10,000 NCAA Postgraduate Scholarship that he will apply toward a Ph.D in mechanical engineering at Purdue University.

When Wang was looking at colleges, he knew he eventually wanted to go to graduate school for engineering. And physics is a great path to get there. As he says, “Although it’s challenging, I really love learning about the way the world works and I think it’s amazing how physicists have used math to explain, model, and predict physical phenomena based on experimental data.”

He adds, “To me, the ability to do physics is more of a mindset than a technical skill. You have to change the way you think if you want to solve them. And if there are no answers to a problem yet, then physics gives you an ability to systematically approach that problem and search for solutions, something that is useful beyond the academic setting.”

Professor Steve Doty, Wang’s teacher and summer research project advisor, challenged him academically and taught him how to apply his knowledge and skills to problems. Doty acknowledges physics is hard, but stresses that students know everything they need to know to solve problems. “And if we don’t know something, then we can figure it out using the things we DO know.,” says Wang.

“He said that in class one day, and in my mind, it was like a switch had flipped. Now when I’m trying to solve a problem (any problem, not just homework problems), I find myself asking ‘what are things that I know that are going to be useful for this problem, and how do I use that information to get closer to a solution?’ ”

Swimming is a lifetime sport for Wang, who has been working the water competitively since he was three. He says the friendships and relationships he built on the team will always be with him — and other lessons as well. Coach Gregg Parini stresses the team aspect of the sport and the grit and persistence these athletes gain through their hours in the pool. Leadership is another element of the team’s success. At the beginning of Wang’s senior year, Parini pulled him aside and told him that for the team to succeed, Wang would have to lead, in voice and in spirit, and put the team before himself.

“That stuck with me throughout the season and I began to see things and do things I had never done before. I realized that my success IS the team’s success and vice versa. One isn’t possible without the other. They complement one another. And had the NCAA DIII championships not been canceled, I’m sure we would’ve seen yet another championship because that’s just how good our entire team is.”

At Purdue, Wang hopes to design and develop combustion/propulsion systems for use in automotive and aerospace transport. “During my college search, I really wanted to go to school for engineering and work on engines and the like. I came to Denison because I wanted to go to a school with an exceptional academic reputation as well as a top-notch swim team. So, I am moving along with my pre-Denison plans to do engineering. And I feel like Denison has prepared me exceptionally well, academically and individually, for this next part of my life.”