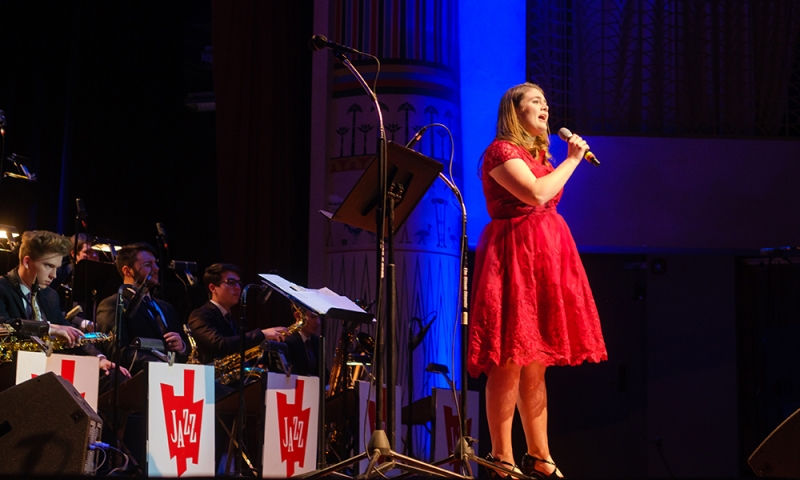 Denison musicians — both faculty and students — are part of the year-long celebrations of Columbus’s ode to the Harlem Renaissance, “I, Too, Sing America: The Harlem Renaissance at 100.” The commemoration pays tribute to the history and long-lasting influences of the movement, which includes a wealth of Columbus-based African-American artists.

The Denison Gospel Choir, faculty member Pete Mills (a jazz artist who coordinates the college’s Jazz Ensemble),  and vocalist Rachel Azbell ’19 were featured in a huge array of artists, performers, and exhibits taking place at locations all over town.

The Denison Gospel Choir had just two weeks and four rehearsals to pull together their performance at the Columbus Museum of Art in October, 2018. Timothy Carpenter, the director of the choir, had just returned from leading a workshop in Stuttgart, Germany, which didn’t leave much prep time for an hour-long concert. Luckily, many of the students had been members of the choir for their entire Denison career.

“That’s a lot of music to try to get ready in a couple of weeks,” says Carpenter, who has worked with legendary gospel artists and scored music for major orchestras including the Columbus Symphony. “But I announced it to the students, they were excited about it. And I was able to pull some songs that some of the members were familiar with. It worked out really nicely.”

They got to work, expanding the boundaries of traditional gospel music for the concert with songs like “Oh, Happy Day!” by Edwin Hawkins, the father of contemporary gospel music.

“We presented different songs that were relatable to modern day,” Carpenter says. “When putting the performance together, I didn’t think of how it would relate to the Harlem Renaissance as much as how I thought about how the audience would feel.”

Performing on “community day,” the day of the week when museum admission is free, the choir ended up singing for a standing-room-only crowd.

“The audience was clapping, shouting, and even stood for the majority of the time,” says Cierra King, a junior at Denison University majoring in communication and theater. “It was so powerful and inspiring to sing in front of the heavy audience that we had. We were connecting with them on a spiritual level. We made hope feel alive at that event.”

Pete Mills, acclaimed saxophonist and jazz ensemble instructor at Denison, co-created and produced during the celebration, on January 18, at the Lincoln Theatre. Mills, a featured soloist of the Columbus Jazz Orchestra, presented “Songs & Sounds of the Harlem Renaissance,” an original production that features Columbus musicians, the Columbus Youth Jazz Ensemble and four vocalists, including recent Denison grad Rachel Azbell.

Mills and his producing partner, Zach Compston, education director of Columbus’ Jazz Arts Group, curated selections by Duke Ellington, Bessie Smith, Ella Fitzgerald, and Billie Holliday for the nearly sold-out concert. The show brought together jazz royalty of Columbus, professional players, and up and coming talents who are making some great waves.

“The music was influenced by the music of the Harlem Renaissance,” Mills says. “We honored and celebrated the legacy and history of jazz in Columbus. We did it with musicians who are in the scene here in Columbus, and we celebrated young talent that’s exceptional.”

Much like the artists that made Harlem a cultural hub following World War I, the work of rising stars like Denison’s own Azbell ’18 is continuing to shape the artistic culture of Columbus.

“We have tremendous support for the arts at Denison, and I’m just excited to be here and to be a part of the musical and art community of greater Columbus,” Mills says.