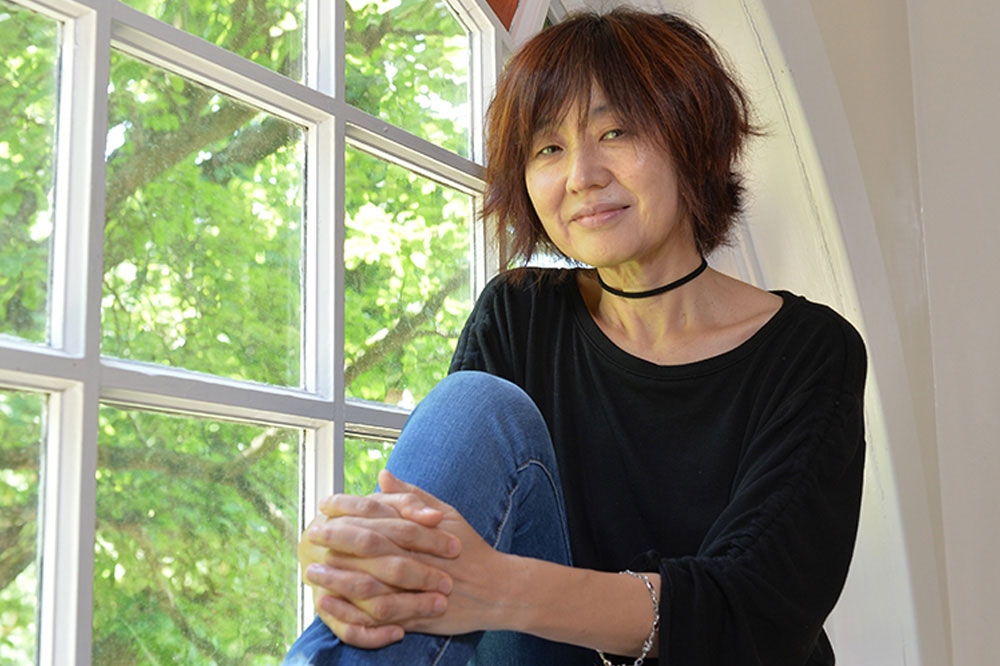 Denison University announces that HyeKyung Lee, associate professor of music, has been awarded a prestigious orchestral commission for the Eastern Music Festival in Greensboro, N.C. The commission is part of a 10-year commitment to the creation of new works by noted composers, funded by Ambassador Bonnie McElveen‐Hunter. Previous awardees are André Previn, John Corigliano, Lowell Liebermann and Richard Danielpour. Lee is the first female composer to receive this honor.

Lee’s new composition, “Climbing Tomorrow,” will be premiered on Saturday, July 21, by maestro Gerard Schwarz, director of the Eastern Music Festival, and former director of the Seattle Symphony Orchestra from 1982-2011, and the Eastern Music Festival Orchestra, which is composed of the professional musicians from across the nation. The work is dedicated to Michele Kang, founder and chief executive officer of Cognosante, an innovative health information technology company.

Lee commented, “It is a great honor to be part of such a prestigious project and be premiered by distinguished musicians.”

Describing “Climbing Tomorrow,” she said, “The piece is an abstract evocation of the contrasts between you-in-the-present (comfortable) and you-in-the-future (seeking something higher). The struggle between these is sometimes direct, with more tension, and sometimes indirect, without tension. As in all my music, it uses minimum musical materials to capture contrasting emotions in various textures and forms.”

Schwarz was commissioned by McElveen‐Hunter to find a Korean-American composer to write a work dedicated to her friend Michele Kang. He shared, “I came across Hyekyung’s music. It was fantastic music. I was really just knocked out. I heard a saxophone quartet and I said, wow, she’s really something. All the stars lined up perfectly to be able to have this happen. The piece is wonderful. I think the audience is going to be really knocked out with it. She has been a joy to work with. She will be present at the premiere. It’s a very exciting event for all of us on many levels.”

Denison Provost Kimberly Coplin noted, “Hyekyung is prodigiously talented, and we are delighted that her work is being recognized. I am especially happy to note she is the first female composer to be awarded this honor. It is certainly well-deserved.”

The 2018 Season of Eastern Music Festival is the event’s 57th season. More than 75 faculty artists and guest artists from separate parts of the globe merge with 220+ students to produce one of the nation’s premier summer music festivals.

Lee attended Seoul Arts School and studied at YonSei University in Seoul, the Czech-American Summer Music Institute in Prague, and the University of Texas at Austin, where she earned her Master of Music, and Doctorate of Music in composition, and a piano performance certificate. Her music has been supported by the National Endowment for the Arts, Meet the Composer Fund, and residencies at the Villa Montalvo, Djerassi Foundation, Ucross Foundation, Brush Creek Foundation, Virginia Center for the Arts, Millay Colony, Blue Mountain Center, Yaddo, and MacDowell Colony. Her works are available on Pavane, Vienna Modern Masters, Innova, New Ariel, Equilibrium, Capstone, MSR Classics, Mark Custom, Ravello recordings, and SEAMUS CD Series Vol. 8.