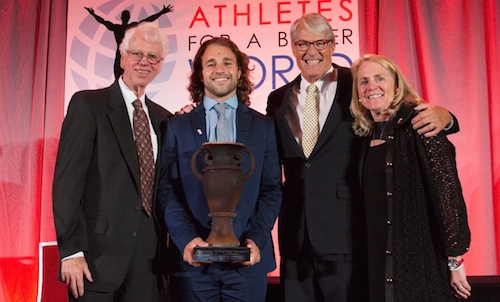 It’s not every day that an NCAA Division III athlete captures a national trophy from a field filled with Division I players – but that’s just what Luke Romick ’16 did when he won the highest service honor in all college sports, The Coach Wooden Citizenship Cup, awarded for character, teamwork and citizenship.

Romick, a football player and track athlete for the Big Red, has volunteered more than 1,000 hours with The Thirst Project, which educates and activates students to “rock the clean water cause and build real water projects all over the world.” Athletes for a Better World presents the Wooden Cup to the best scholar-athlete in a competition that is open to all college athletes from all divisions in all sports, making the winner truly the best of the best. Previous winners include professional football players Tim Tebow of Florida and Quinton Carter of Oklahoma.

Better yet, there is an added legacy effect, as future Denisonians will benefit from Romick’s hard work and recognition. A $2,000 annual scholarship, renewable for four years, in Romick's name will be open to incoming students. And another $1,000 will be donated to a charity of Luke's choosing. (We might be able to guess where that is going.)

Retired football coach Vince Dooley, the legendary Hall of Famer who guided the University of Georgia to the national championship, also was honored alongside Romick for his lifetime of professional and philanthropic accomplishments.

It's been quite a year for Romick, who is majoring in communication and environmental studies. In addition to winning the Wooden Cup, he also was one of only 22 college football athletes from all divisions on the Allstate/AFCA Good Works Team honored at the 2016 Sugar Bowl in New Orleans.

Romick serves as the president of Denison's Student-Athlete Advisory Council and the president of the North Coast Athletic Conference Student-Athlete Advisory Council, for which he represents the more than 3,500 student-athletes across the conference. A four-year member of the football and track and field teams, Romick recently attended the NCAA Convention in San Antonio, Texas, to represent the student athletes of the NCAC's 10-member institutions.

The competition is open to all college athletes from all divisions in all sports, making the winner truly the best of the best.

Beginning as a social media intern in 2012, Romick has risen through the organization and now works as a member of The Thirst Project’s executive staff, where he manages events and fundraisers as well as assisting in marketing and operations for the organization.

As an intern with The Thirst Project, Romick co-produced the Thirst Gala at the Beverly Hilton, attended by numerous actors, comedians, and musicians. This year, at the fifth annual event, The Thirst Project raised $300,000 in a single night and Romick's social media team trended worldwide on twitter at No. 3 during the evening.

Romick also has co-produced the organization’s VidCon exhibit, as well as a private gathering of beauty and hair industry elites in Las Vegas. In all, Romick has been a part of nearly $1 million in fundraising to date.

In Granville, he leads a chapter of The Thirst Project that boasts more than 50 members. Last year's Football Game for Thirst raised an additional $7,000 to provide a clean water supply to close to 300 people.

On the field, Romick played in all 40 games during his four years with the Big Red football team. This season, he started in every game, amassing 47 tackles, including 7.5 for a loss. In his career, he finished with 151 tackles, 14.5 tackles for loss, and five interceptions. He also is a sprinter on the Denison track and field squad.