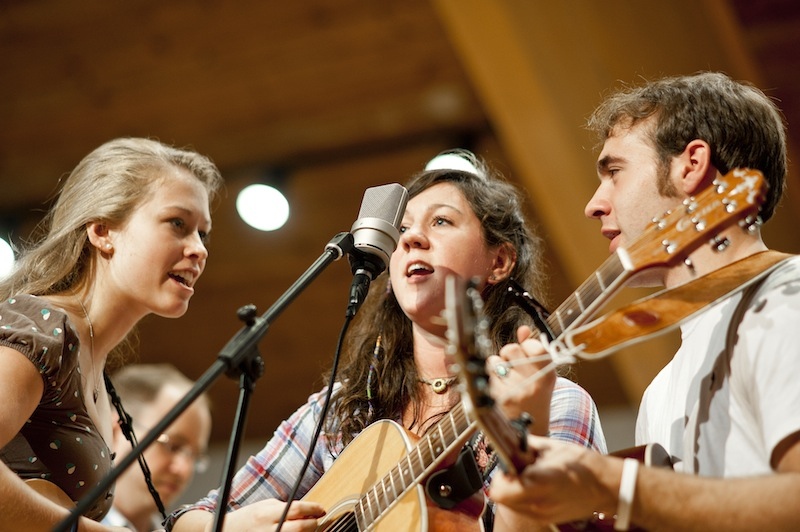 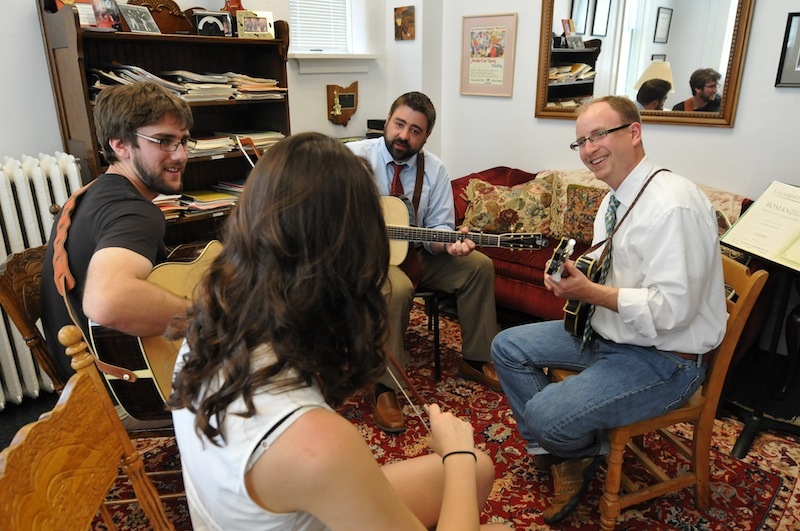 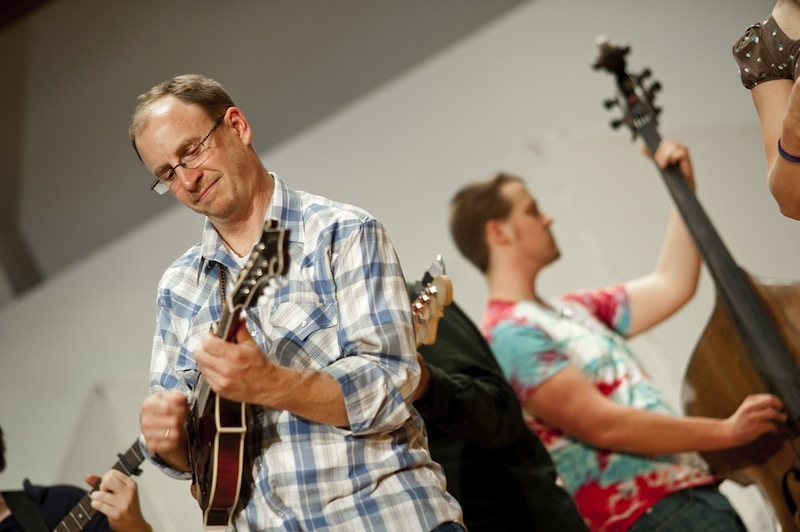 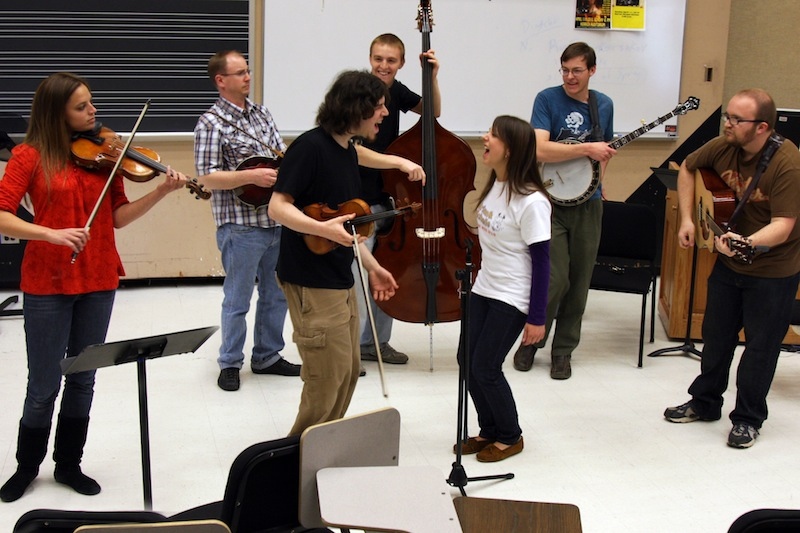 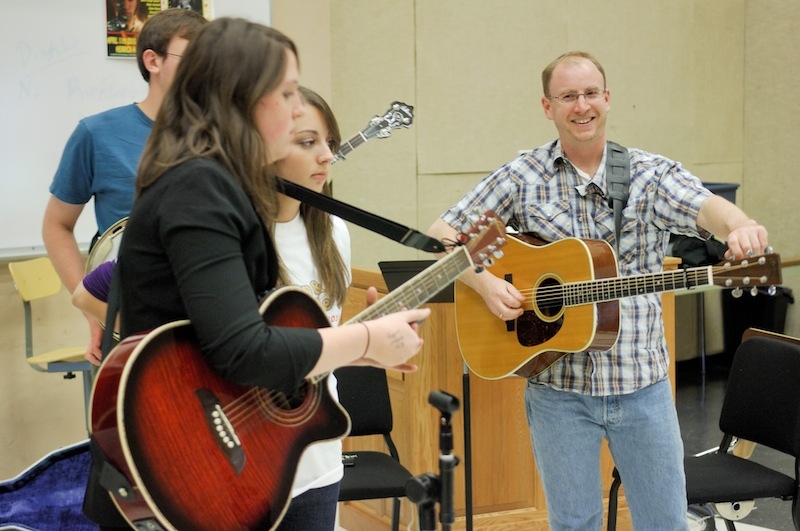 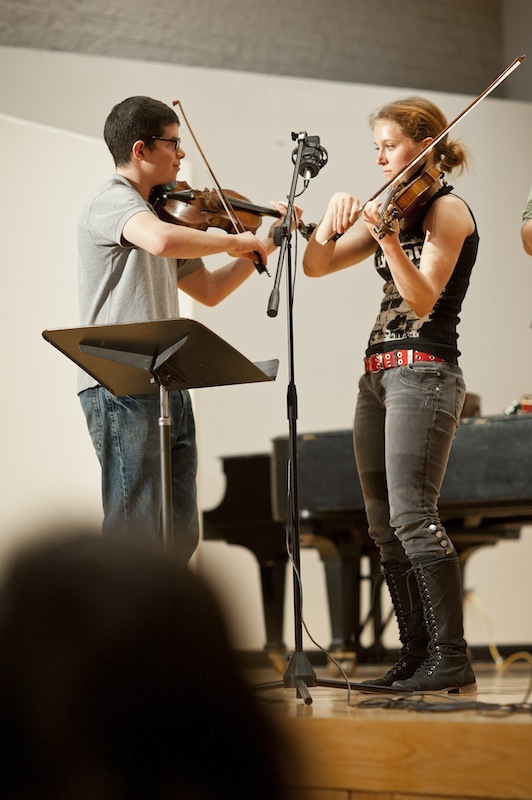 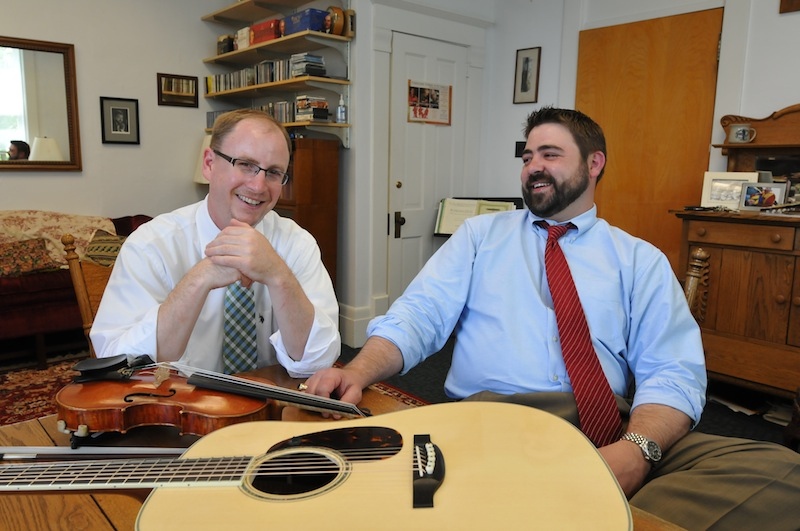 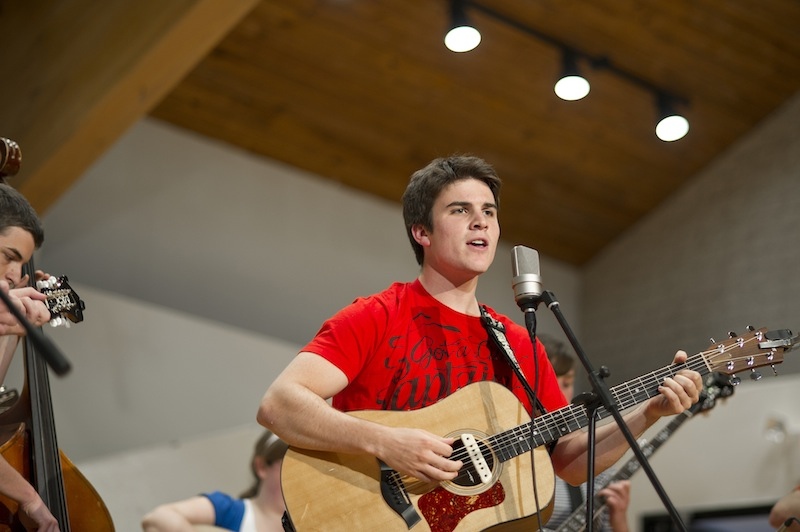 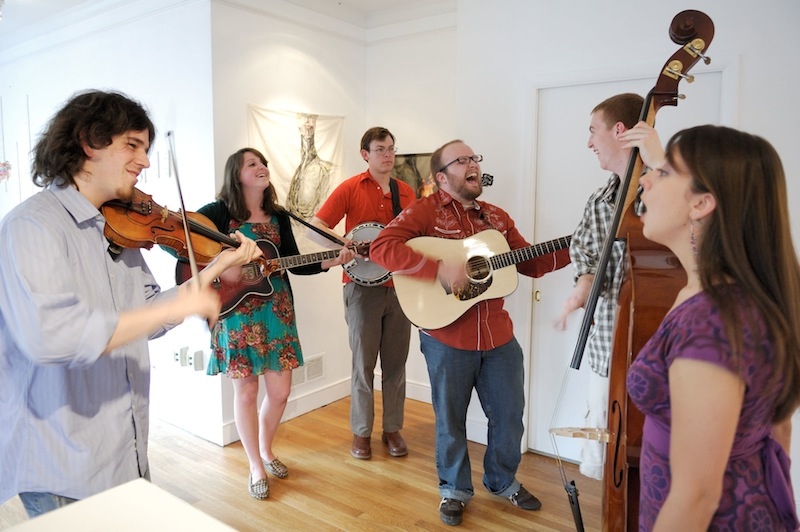 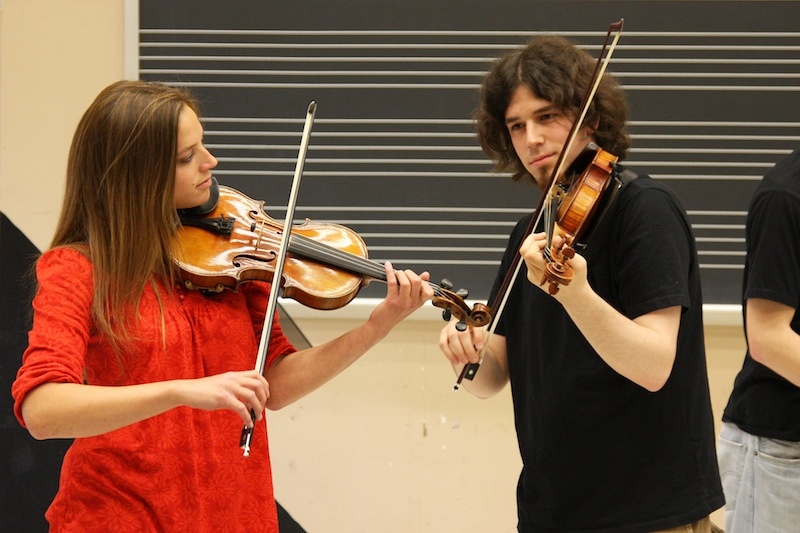 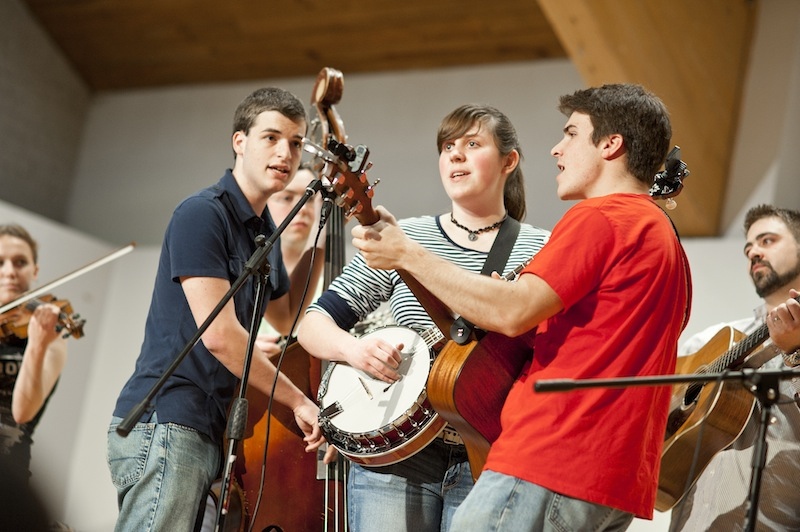 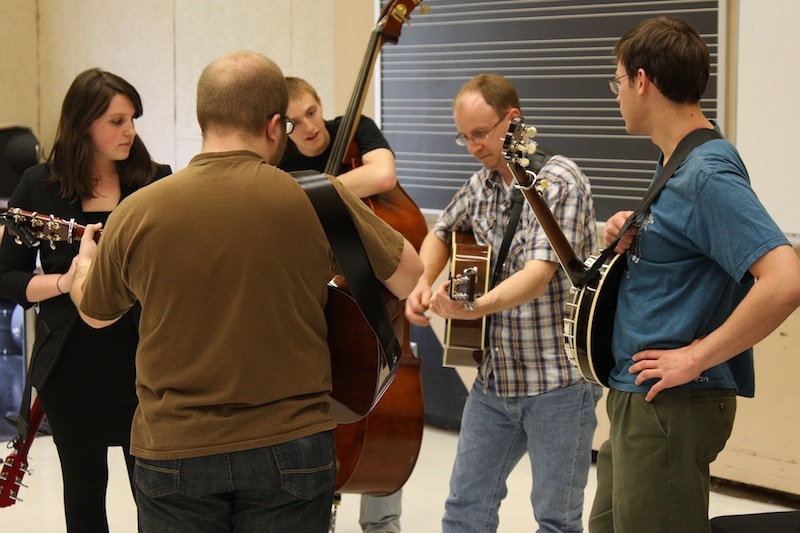 Bluegrass music is more than a toe-tapping good time at Denison, it’s also one of the first—and finest—academic programs in the nation.

Lifting his bow up to his strings in Burke Hall’s rehearsal space, the professor prepares to lead a half-dozen students—standing in a tight semi-circle around him—into a musical number. But what results isn’t what you might expect to hear from a classical violinist. His movements are fluid and whimsical rather than rigid or deliberate. The sound is quick and rhythmic, changing its pitch almost instantaneously. An upright bass joins in, followed by a mandolin and acoustic guitars; then a banjo rings out, and a male student begins to sing soulfully and unexpectedly, “Honey, won’t you let me in?”

Andy Carlson wasn’t always teaching bluegrass in the classroom. After arriving at Denison in 1999, the Athens, Ga., native spent the first 10 years of his tenure training music students in classical violin and serving as concertmaster for the university’s symphony orchestra—endeavors that he still performs today. It was a combination, however, of Carlson’s second passion for folk music and the university’s out-of-the-box thinking that led to the creation of the academic concentration in bluegrass with him at its helm.

For Carlson, the music is deeply personal. His grandfather, acclaimed Georgia fiddler Earl Murphy, who died in 2011, introduced him to bluegrass and taught him fiddle at a young age. Photos in Carlson’s office—some taken when Carlson was a boy, others only a few months before Murphy’s death—depict the smiling duo side-by-side with instruments at their chins.

“For me, the most wonderful part about playing bluegrass is working together as a band.”
Kyle Baker ’13

“I was so lucky to have such a rich experience with him,” says Carlson. “His enthusiasm and excitement is what got me going as a young kid. That still carries me through a lot of lessons sometimes. It’s about spreading the love of the music.”

As an undergrad himself, studying violin at the University of Georgia in the early ’90s, Carlson says he was discouraged from playing bluegrass, or even from fiddling, because it was considered to be taboo and deemed unacceptable by academic standards. Even today, the number of American colleges that offer courses in bluegrass can be counted on one hand. But only one does so in a liberal arts environment—and that’s Denison.

Bluegrass’ roots can be traced to the British Isles, whose immigrants brought their music with them to Appalachia in the 17th and 18th centuries. The style has continued to evolve, blending elements of country, gospel and even jazz. Handed down from generation to generation, the music lives on not in written form, but audibly, almost like a secret passed from ear to ear. This makes the teaching of it unique, and uniquely difficult.

“With classical music, your goal is to take what someone else has written and try to recreate it as authentically as you can,” says Carlson. With bluegrass, however, it’s all about listening, recognizing patterns and cues and improvising.

Guitarist Hayes Griffin, who graduated from Denison in 2010 and now tours full time with the April Verch Band, says developing the ability to understand the music without written instruction is no cakewalk, but certainly comes with its rewards.

“After you beat your head against the wall for a while trying to learn that way, you begin to hear chord changes before they happen; your fingers start to instantly find the melody to a tune you’ve never heard before; or you fill in vocal harmonies to a new song,” he says. “The music becomes less mechanical, and more spiritual.”

With its emphasis on creativity, cognitive advancement and learning through immersion, bluegrass seemed a perfect fit with the university’s focus on liberal arts. “We’re not really, as an institution, trying to train specific professional skills,” says Carlson. “We’re trying to develop people who can think.”

Among the roughly 30 students enrolled in the bluegrass program, several are majoring in something other than music. Some are learning to play their very first instrument, while others are expanding their musical horizons to include an entirely new genre. Bluegrass is steeped in the culture at Denison, with frequent concerts, weekly community jam sessions at the student union, and an extraordinary annual festival that Carlson established to bring world-class musicians to Granville. “This music is desperate right now for a new audience,” Carlson says. “It has to have it to continue.”

“My favorite thing about playing bluegrass is the smile that crosses everyone’s faces when playing or hearing it,” says fiddler Kenzie Maynard ’15, who hopes she’ll tour professionally someday. “It’s just a happy genre, and it makes people feel good when they hear it.”

Kyle Baker ’13, a guitar performance major, knew nothing about bluegrass before he came to Denison. After a professor referred him to the program, the Granville native says he fell in love with it.

“For me, the most wonderful part about playing bluegrass is working together as a band,” Baker says. “We aren’t limited or restricted by electric instruments so we can practice anywhere, even outside on the lawn when the weather’s nice, and I feel that this level of spontaneity is something that brings us together.”

The goal of the program, according to Carlson, its designer, is to cultivate the same passion his grandfather instilled in him, to “take people who really don’t know anything about bluegrass and haven’t heard it, and make them fans of the music, so that when they leave Denison they have an appreciation for America’s heritage through the music,” he says. “That’s why I’m teaching it.”