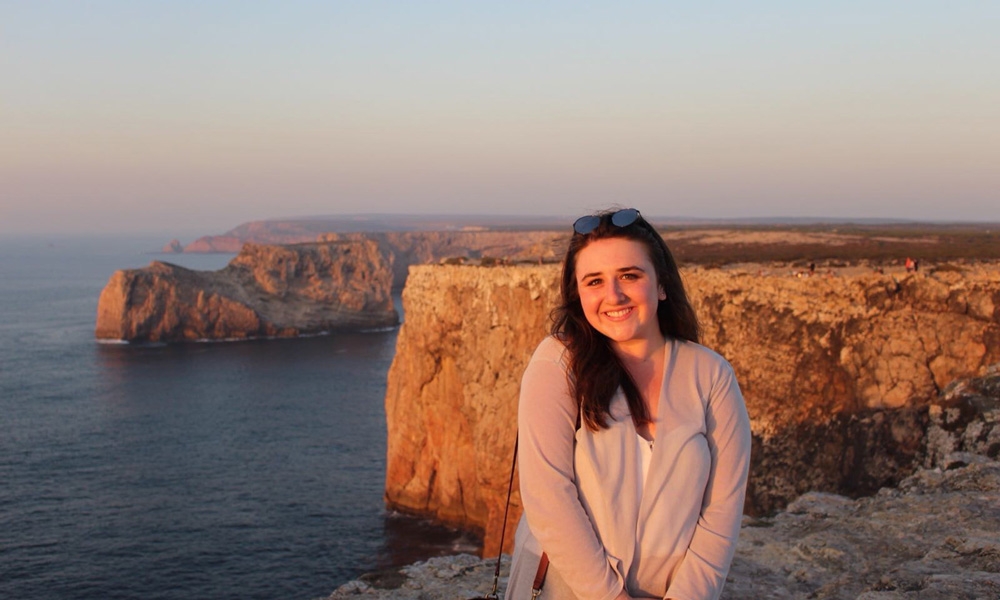 Laden ’19 watching the sunset in Portugal

One of nine Denison University Fulbright award recipients in the Class of 2019, Julia Laden ’19, will live and work in Gran Canaria in the Canary Islands. She sees this as a natural extension of her time in Seville, Spain, where she studied abroad in 2017.

“Studying abroad really changed how I see myself in an international and cultural context,” says Laden. “Everywhere you go there is a different pocket of culture, so there is no one specific culture of Spain.”

“I visited northern and central Spain. Each trip I took I got to see another part — and I was only abroad for three months. I want to experience those deep and rich cultures. I knew [the Fulbright Program] would be an opportunity to delve into the culture more and to work with kids.”

Laden, who majored in psychology and minored in women and gender studies, wants to pursue a career in either social work with an emphasis on children, and/or pediatrics. As part of Big Brothers/Big Sisters in nearby Newark, she mentored a child for four years and volunteered at the New Beginnings Women’s shelter. During her Fulbright experience at Gran Canaria, Laden will work with children whose ages range from three to seven.

“Studying abroad really changed how I see myself in an international and cultural context.”

“I’m excited to figure out lesson plans that help younger children who are still understanding their first language to start building their abilities in a second language,” she says. “Little children’s minds are so valuable — when you are younger, you can learn a second language more easily. It’s a critical period that can really help them in their career and life. I want to build trust in the classroom and for them to build trust in each other.”

Laden applied for her Fulbright through the Lisska Center for Scholarly Engagement, which is instrumental in helping students with applications for international scholarships. Margot Singer, English creative writing professor and director of the Lisska Center, reads applicant essays and provides feedback. Appointments also are offered to support students through the process.

“The mentorship and connections that we make with professors are something that give you a rare advantage in this process, because you develop close relationships with them,” says Laden. “Dr. Andrea Lourie, [Visiting Assistant Professor of Psychology] my advisor, knows me not only as a student but as a student leader and as a person. She’s invited me to hang out with her family. She’s seen me develop as a person, not only as a student.”

“Julia is incredibly kind and thoughtful,” says Lourie. “She is engaged with her communities on campus and has a passion for creating a positive climate on campus. I have seen her lead difficult and controversial conversations supporting her peers and guiding the conversation to a productive outcome.”

During her time as a Fulbright Scholar, Laden hopes to live with a host family in Gran Canaria.

“I’ve always loved speaking Spanish. Learning another language for me has been something that I was meant to do. There’s something about it that feels like home.”