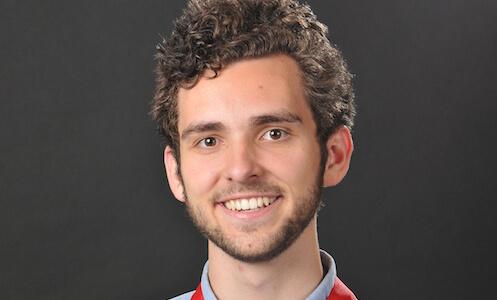 McLane Sellars, a religion major, was awarded a President’s Medal by President Adam Weinberg in a ceremony that took place on Friday, April 15, in Swasey Chapel. The President’s Medal is the highest honor the college bestows on a student, given for academic success as well as for creating a legacy at Denison. Sellars was one of only nine students to receive this honor.

In presenting the President's Medal to Sellars, Professor of Philosophy and chair of the faculty Steven Vogel said of Sellars, “Mac, you have been described as a true intellectual and as a student from whom a professor can learn. Your deliberate sharing of scholarship, always with a gracious spirit, enables such give and take to be consequential and natural. As a religion major, you are known in the classroom for asking important questions and for your commitment to fostering meaningful dialogue among people from all corners of campus life. Through your music and campus activities, you make connections easily, and your campus network stretches far and wide. It seems that everyone on campus knows you! Leadership seems to come naturally to you, and your capabilities in this area have been repeatedly demonstrated through your involvement with TEDx Talks, as an August-O leader, and co-founder of Story Slam. Your ability to listen, pose questions and promote dialogue hav e made you an exceptional asset within any group. A fellow student remarked that while not having a formal position with the Denison Christian Community Group, the group's leaders often have you attend their meetings and the meetings are better for your thoughtful contributions. Mac, we are proud to award this medal to you with sincere gratitude for your substantial contributions to life on this campus.”