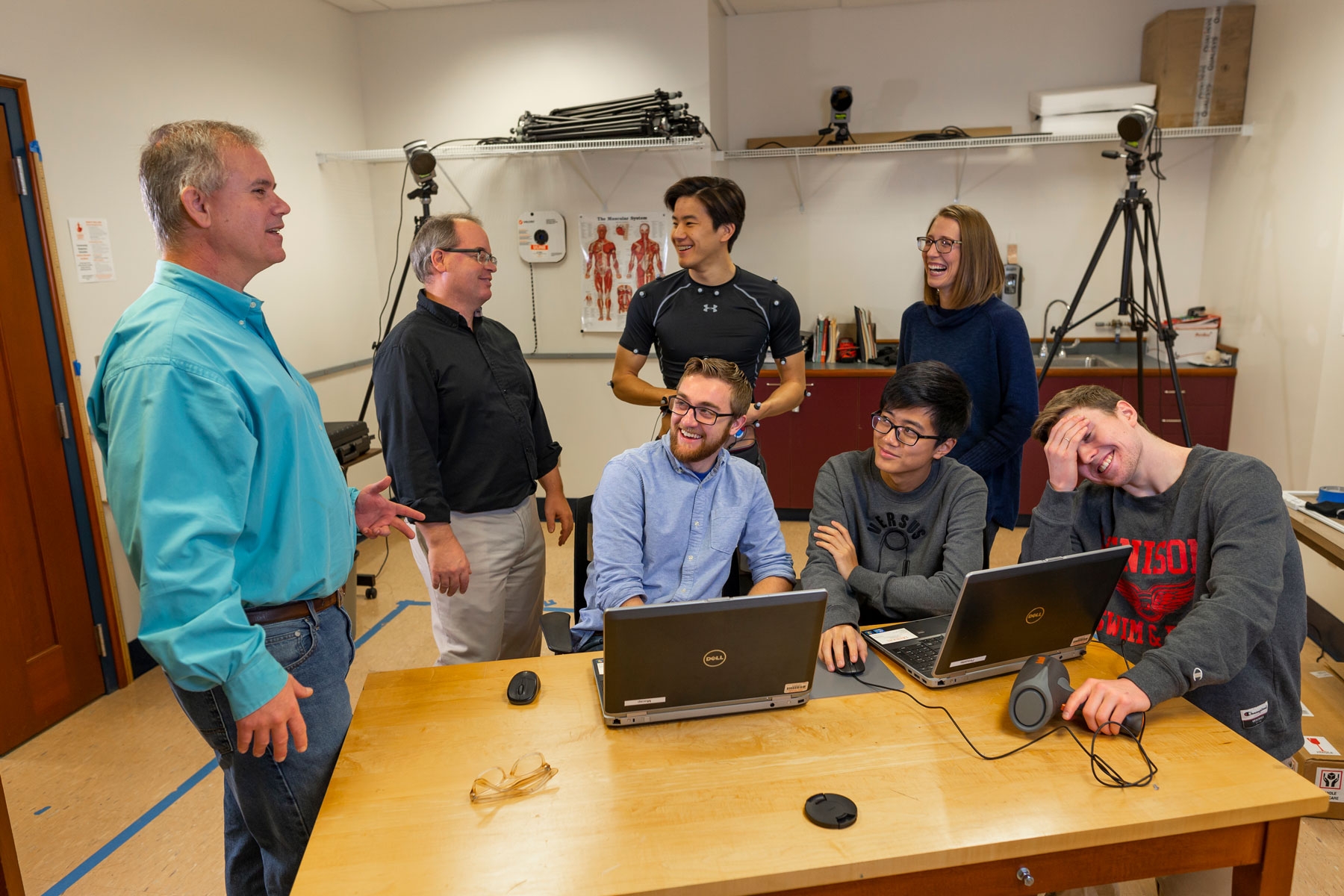 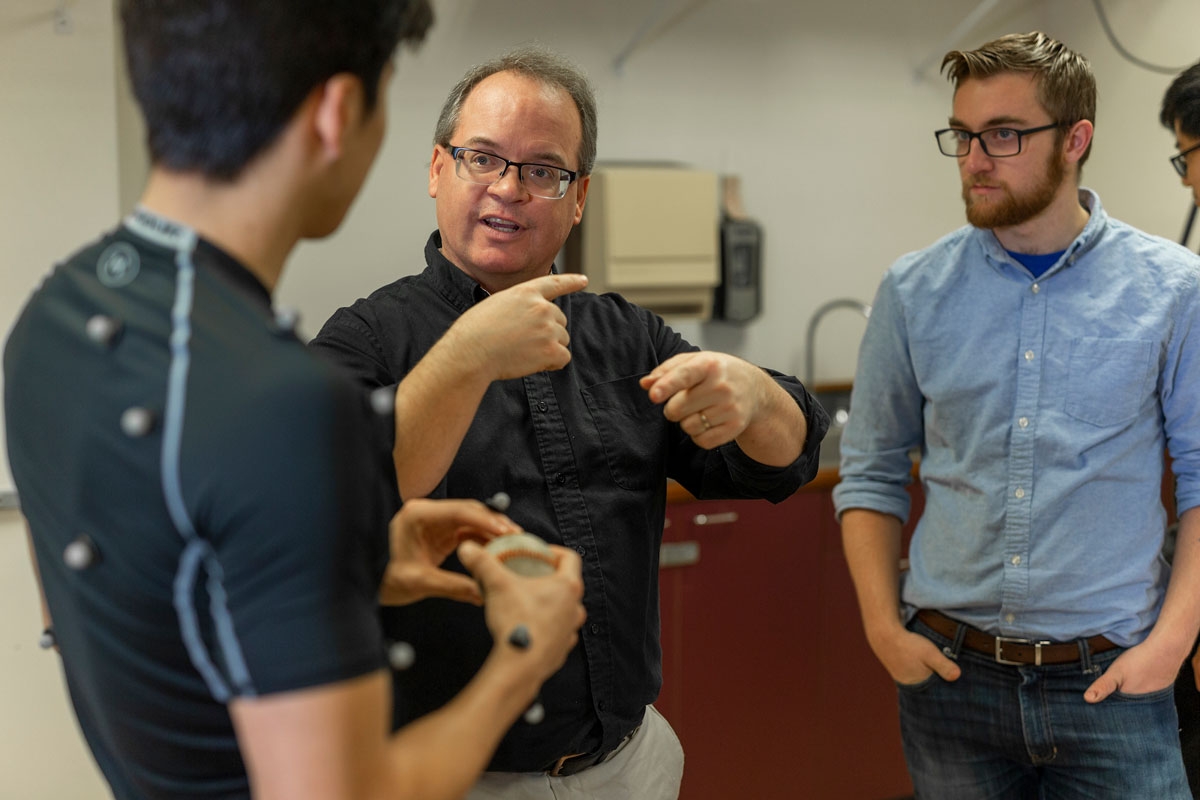 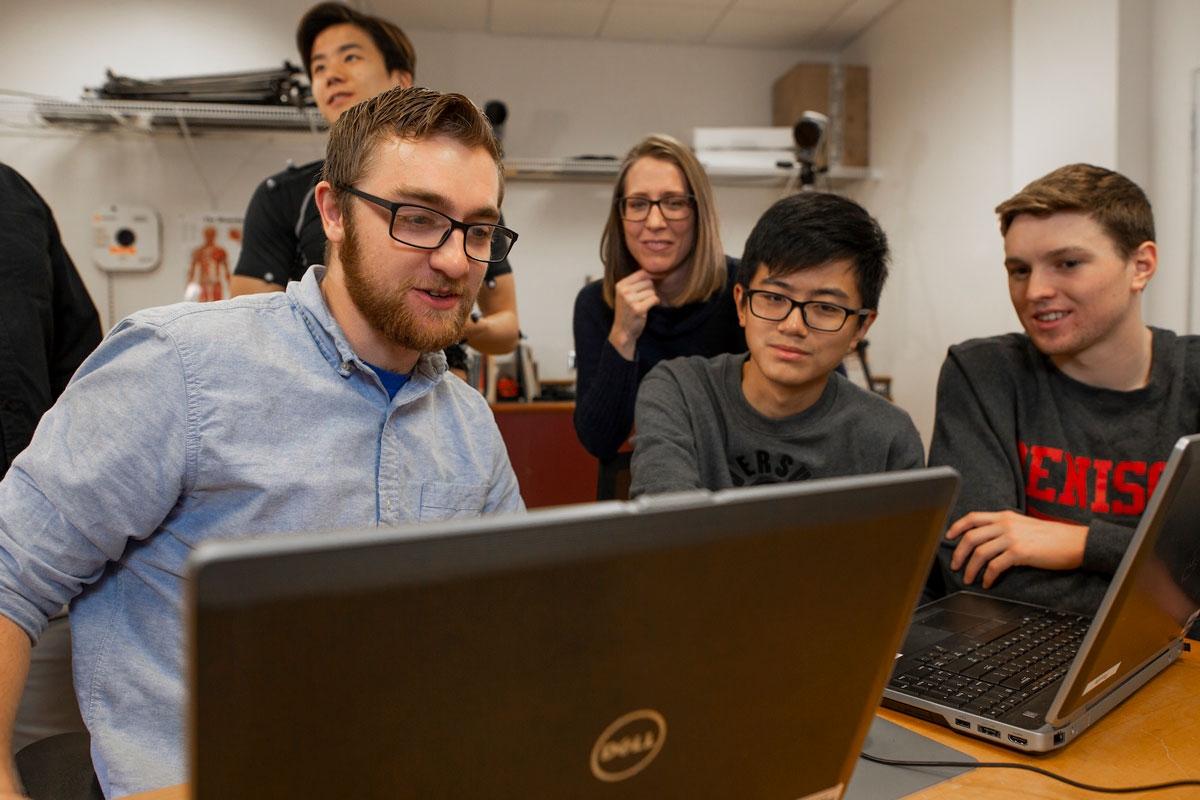 Students and professors review their data.

We’ve all heard that guy. The one analyzing the arm of the pitcher on the mound. He’s spouting off about how fast, or more likely, how slow that rookie is hurling the ball over the plate while we’re just trying to enjoy the game.

Well, maybe he CAN do better.

Denison professors and students are beginning to ask questions about the physics of throwing a baseball and they’ve come up with some pretty good answers so far.

“We were watching baseball players go to throw, and they weren’t using their core at all,” says Steven Doty, professor of astronomy, physics, and computational science, who has coached a youth baseball team to the state of Ohio championships.

“The largest muscle group in the body is the core muscles and nobody’s really looked simultaneously at the extent to which people activate those muscles. These are basic scientific questions that it turns out nobody has answered.”

Doty started the project in 2015 with Melanie Lott, assistant professor of astronomy and physics, and Eric Winters, associate professor of health, exercise, and sports studies. They are looking at human biomechanics, for better understanding how the human body moves, to enhance throwing performance and prevent injury for baseball players.

It’s high-tech stuff, with reflectors placed on elbows, wrists, hips, and knees on volunteers to identify how people move, how fast they are turning, and in which direction they are going. Cameras and infrared strobe lights are used to capture the motion of people fully outfitted in what looks like an Avatar suit. But this isn’t virtual reality.

“We’re learning things than can actually help people,” Doty explains. “We want 8- or 9-year-olds to have a good experience as they grow to be 15- or 16-year-olds. There are things that players can do that will not decrease performance but will increase injury prevention significantly.”

It turns out, for example, that dead weight lifts can injure your back. So the team has developed an intervention, using medicine ball throws that won’t stress your back. Instead that will give you the proper timing of the core muscles as you activate them.

“We’re learning things than can actually help people. We want 8- or 9-year-olds to have a good experience as they grow to be 15 or 16-year-olds.”

They helped the professors with several areas of research; things like how far back the shoulder goes when throwing; and kinetic chain analysis, essentially looking at whether it is a tidal wave or a snap moment when the body turns on during throwing.

“When you’re being taught to throw a baseball, everyone tells you to generate power from your legs, to push off the ground hard with your feet,” he says. “Everything else that’s discussed pertains just to the arm and the arm motion. What happens is a lot of disconnect in the core. We wanted to see how well athletes are activating the external obliques and how well coordinated their timing is around the throw.”

“What these athletes really need to be doing is pushing off the ground with their core muscles to twist their upper body to create that throwing motion,” Baker says.

Only a handful of labs in the world are capable of doing this type of research right now. One reason is because of the huge data sample the Denison team is pulling from. They have 20 to 30 subjects currently, all volunteers of different ages from local schools. In the fall of 2018, they will have another 20 or 30 high school and collegiate athletes and, in the 2019 spring, they will add 9 to 14-year-olds to the mix.

The Denison researchers give the players a brief analysis of what they’re doing and the players provide data for the team. It’s a win-win for everyone.

Even Rapsodo, the data-driven sports technology company, has gotten on board by donating a pitch tracking machine to the project. The researchers will be able to correlate things like pitch speed and pitch spin rate with the device. In exchange, Rapsodo will use Denison’s human performance results to help inform interventions, adding value to the company’s contract with each of the 30 major league baseball teams.

“It’s really cool because they are results that matter in a field where there is so little actually known,” Doty says. “Everywhere you look, there is an interesting result. In fact, that’s our biggest problem. It’s easy to be distracted by the next shiny thing. One of the great lessons that our students are learning is staying focused, because this thing will lead to the next thing.”