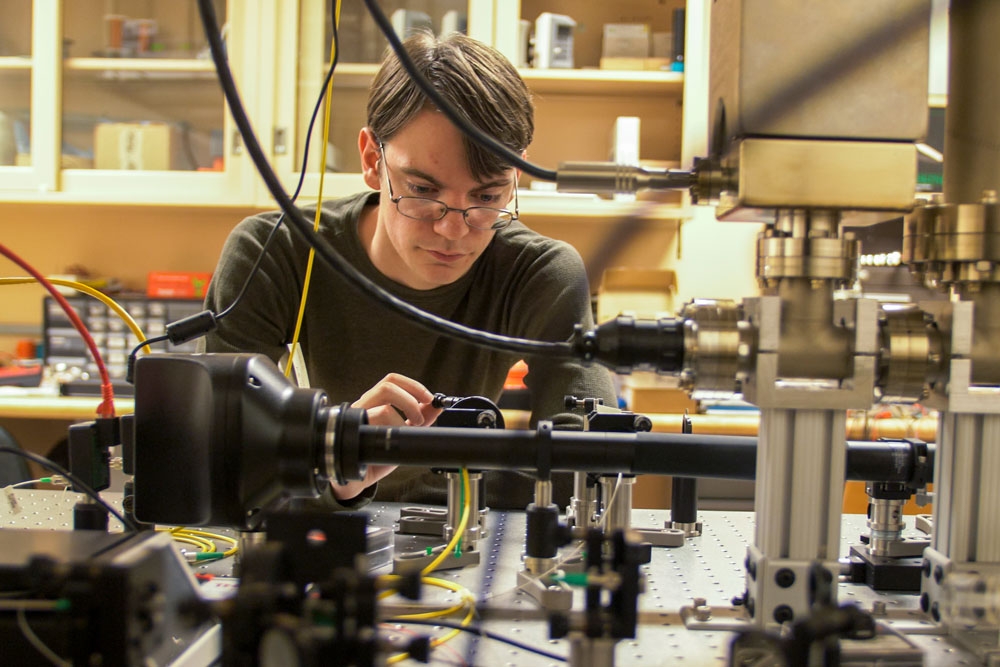 National Science Foundation fellowship winner Patrick Banner ’18 is a talented researcher in quantum optics, and a scientist who wants to share his enthusiasm.

When Patrick Banner ‘18 looks at the world, he’s searching for the things that are beyond sight, looking for the underlying concepts that support what we take for granted every day. That curiosity is what propels him to study and experiment in physics. “Thinking about problems requires knowing how all the pieces fit together. Sometimes you have to go beyond the picture of what you’re seeing—and that picture can be so big, you can’t see it all at once.”

His drive to understand the deep roots of an issue pushes Banner’s research, and it’s clear that he has the chops to do it well. His work has been recognized by the National Science Foundation, which awarded him a graduate research fellowship that will fund his doctoral research in quantum optics.

Which is what, exactly? Banner’s work is connected to quantum information, which offers the possibility of lightning-fast computing power and greater security than current options. Such work could be particularly important in telecommunications.

The daily grind: Banner performs spectroscopy on ions to measure their energy structure, collects data, and analyzes it. He also develops electronics to modify laser light to suit experiments’ needs. If work is humming along, he’ll keep at it past quitting time. “Sometimes I’ll work deep into the night on the days when lasers are working well.”

Next up: Studying atomic physics at the University of Maryland

Banner also completed two summer projects and senior research with Associate Professor Steve Olmschenk, experimenting with trapping and laser-cooling ions for quantum information applications. And he was selected as one of only four inaugural winners of the Provost’s Academic Excellence Award.

Banner’s dream is to continue that research, but he also wants to teach college-level physics. He’s been inspired by great teachers, Professor Wes Walter among them. For example, Walter’s class in electronics includes both classroom and lab time. Students learn in their classes, then practice those theories in the lab. “You can do pretty much anything you want—as long as you don’t blow the place up,” says Banner. “We used binary logic gates, built circuits for analog electronics, learned about capacitors and inductors, and more. I even designed a small game at one point, and investigated chaos for the final project.”

That class pointed him toward his future field. “I realized that I wanted to be an experimentalist, someone who conducts actual experiments; as opposed to a theorist, who conducts simulations on computers.”

Banner also tested future dreams of teaching while he served as a lab assistant in astronomy and physics classes. “I’m excited to help people understand something I really like. I enjoy coming up with new ways to help people understand these concepts. Often this, together with seeing where students are with the material and helping them from there, is what leads to those light bulb ‘aha!’ moments.”

He’s experienced the same kind of mentoring and growth as a student himself. “The physics department has been just amazing, with brilliant teachers, who are kind and available. I feel kind of spoiled in terms of having such excellent professors.”