Acoustic and Electric Bass instructor Doug Richeson has performed with Tony Bennett, the Count Basie Orchestra, Phil Collins Big Band with Quincy Jones, Bucky Pizzarelli, Frank Vignola, Jimmy Heath, and various orchestras throughout Ohio and the United States. Richeson teaches classical and jazz bass here at Denison. His work as a musician now shines through his performances with the Columbus Jazz Orchestra, Cleveland Jazz Orchestra, and numerous other organizations. His NFL halftime performance and Grammy awards are incomparable to his mark on the jazz bass industry and his students. 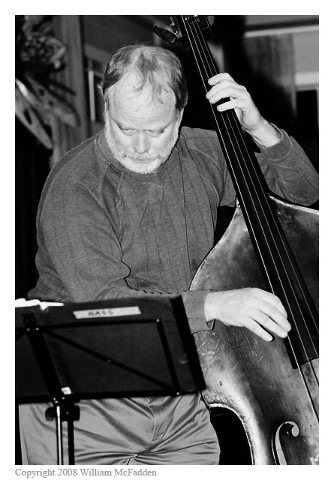 Though there are surely many, could you name a favorite bass player of yours?

As far as jazz bassists go, one that I have listened to a lot, kept track of and always found an interesting player is David Holland. He is one of those guys that I started listening to in the early 70’s and to this day I am still searching out his recent recordings. He is a true virtuoso. The guy who got me really started thinking about classical bass playing was Gary Karr—I first heard him play live in 1975. He changed my life.

Despite your impressive repertoire of tours and shows, could you name a few performances that stand out?

Probably something with Tony Bennet… maybe the MTV Unplugged performance in the Sony Studios that won album of the year, best traditional pop and two Grammys. Being on the road with him for two and a half years and 200 concerts a year, it’s hard to pick a favorite. I played Carnegie Hall with both Tony and Phil Collins’ big band, and both were quite memorable. With Phil, probably the most memorable was the Monterey Jazz fest which is on his album “A Hot Night in Paris.” The show was so incredible—the way things sounded was really cool. It left an impact on me.

What was the most frustrating thing to you as a young musician? What advice do you have?

I always wanted to play more. There was never enough work, in my mind. Back in the 70’s and 80’s I was working 4 or 5 nights a week with different people. I was working in Cincinnati and Cleveland and Columbus but I was always wanting more. I was never happy. I had the music bug, and every experience I seemed to learn a bit from—A need to play with great people and learn so much from them and love the experience. The best advice I have is that you have to have a strong passion. It’s a terribly insecure business, there is no security about it. You have to have the want and the love for your instrument and playing. You have to keep practicing, and you’re not going to get immediate satisfaction. It takes years to develop a craft.