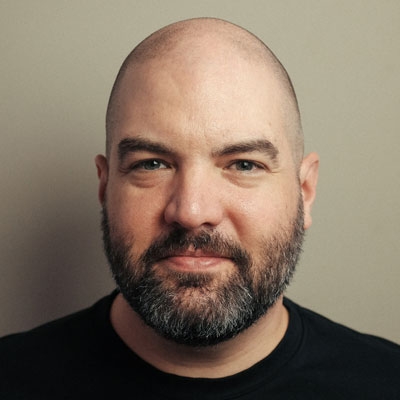 Composer Matt Morton ‘99 has found a strong foothold in the cinematic world. The music and environmental studies major is making a name for himself as a composer for well-regarded documentaries. His most recent project was scoring the documentary “Apollo 11,” which was created from more than 150 hours of actual footage of the unprecedented event.

In a recent Being Retro interview, Morton, who also scored the Emmy-winning “Dinosaur Dynasty” documentary, shares his creative process for “Apollo 11.”

In the spring of 2017 when I found out I was going to have the honor of scoring this film, the historical importance of the Apollo 11 Mission almost paralyzed me - how could I ever do it justice? I’m a huge science nerd, and I put humankind’s first steps on an alien world right up there with the first time a fish walked on land. It was an evolutionary milestone. How do you put that into music? And on the other hand, considering the huge number of films and film scores that had already been made on the subject, how would I find a unique way to score it?

I approached it like a method actor, by exhaustively researching the mission and all of the films that were made about it. I read tons of books and watched and re-watched every documentary and narrative film about the Apollo Program that I could find. I revisited the music of the time (I’ve loved 1960s music my whole life), and the ways that authors and the general public reacted to the event when it happened. And since the action centers on the astronauts and mission control, I also tried to think about what it must have felt like to be one of them at each step of the way. I knew Todd (the director) wanted it to feel like you’re right there with them on the mission, so the score needed to ratchet up the tension and excitement that they were all experiencing.

But I also thought it was important that, since we’d only be seeing archival footage from 1969, we should only hear sounds that could have been made at the time of the mission. A lot of the ‘Apollo 11’ team (including Todd and I) also worked on ‘The Last Steps’, a short documentary about our last manned mission to the Moon, Apollo 17 in 1972. Like ‘Apollo 11’, that film used all archival footage, but for that score, I used any instrument or effect that fit my approach to the scene, including modern ones. I love that score in its own right, but one of my thoughts after the fact was that it sometimes took me out of the feeling of “being there” in 1972 when I heard modern-sounding drum loops or super-lush digital reverbs. So when we got the chance to tell Apollo 11’s story, I got to learn from that experience and try a new approach.

My breakthrough, as far as narrowing down my approach and palette for the score, came when I started thinking about the fact that at the time, the Apollo Program was at the absolute cutting edge of science and technology. The sheer amount of money spent (around 3% of our GDP) and the number of people working on it (over 400,000 people) have been credited with fast-forwarding the normal pace of technological innovation by about 10-20 years. I started thinking about whether there were any parallels in the music world of the time. Were there any technological developments happening then that lead to new types of music being made? What was the avant garde music of the time like? And would any of that new music and music technology be useful in scoring a dangerous and heart-racing space adventure in a 6.5 million pound rocket?

My answer was the synthesizer and the huge world of electronic and experimental music that it enabled after its development in the 1960s. In 1963-1964, Bob Moog (in upstate New York) and Don Buchla (in San Francisco) were each independently developing the first modern (non-room-sized) modular synthesizers, unaware of each other’s work at opposite ends of the country. They steadily refined and expanded these instruments throughout the decade and they began being used by the few commercial composers and university professors who could get access to them (at the time, they cost the equivalent of a house). In 1968, Wendy Carlos released her album ‘Switched On Bach’ (which were multi-tracked recordings of classic Bach pieces played entirely on a Moog synthesizer), and after its release, the Moog synthesizer blew up. In the years that followed, the synthesizer began being used on recordings by mainstream artists like The Beatles, The Who, Keith Emerson, and Pink Floyd, as well as electronic music pioneers like Tangerine Dream, Isao Tomita, Suzanne Ciani, Kraftwerk, and Giorgio Moroder. Today, the synthesizer’s reach is immense, but it had its big bang around the time of the Apollo 11 Mission. The futuristic sound of the synthesizer also fit in perfectly with the technological focus and futuristic look of our film.

So by late 2017, I had decided to only use instruments and effects of that were available in 1969, but I didn’t actually own any synthesizers older than my Moog Minimoog Model D (which was released in 1970). This is when I got lucky. That year, Moog Synthesizers had decided to build (reissue) 25 of their classic Synthesizer IIIc modular synthesizers using the same parts and construction methods they used back in 1968. I decided to make the (sizable) investment to buy one of them and use it as a central voice in my score. When I combined the Moog IIIc with other vintage pieces including a Binson Echorec 2 (an early tube echo restored and modified by Soundgas Ltd.), a Mellotron (an early tape-based keyboard sampler), a 1965 Hammond A-143 Organ, a Leslie (rotating) Speaker, various guitar tube amps, spring and plate reverbs, early drum machines like the Maestro Rhythm King and Ace Tone Rhythm Ace, and an Echoplex EP-2 (a tube tape echo), I had a formidable palette of period sounds for the score. I started experimenting with all the gear and seeing what kinds of sounds I could get out of them. I produced hours of music that no one will ever hear, but some of those experiments actually made it into the final score, including the opening cue “The Burdens and the Hopes” which plays under the suiting-up and leaking valve scenes. I’ve also posted a few of my synth and musique concrete experiments (the ones I knew wouldn’t work in the film) on my Instagram. The only other ingredient was the orchestra, which of course also existed at the time.

My original concept for the compositions was to make them sound like they were archival just like the film footage, or in other words, to make it sound like they were written, played, and recorded in 1969 by musicians and engineers of the time. But then I realized I could never really do that - it would only ever be an emulation. It wouldn’t ring true because as an artist, in order to get the best music out of myself, I have to stay authentic to myself and my tastes, and I live in the present. I wasn’t born until 1977, and I didn’t start playing my first instrument (guitar) until 1986. So I decided the most interesting thing I could do was to make modern compositions, but because I’d be using the instruments and effects of 50 years ago, they’d probably be a unique mixture of then and now and help to bridge the time gap between the people on the screen and the people in the audience.