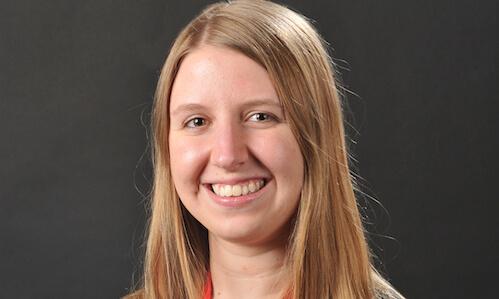 Sarah Winnicki, a biology and history double major, was awarded a President’s Medal by President Adam Weinberg in a ceremony that took place on Friday, April 15, in Swasey Chapel. The President’s Medal is the highest honor the college bestows on a student, given for academic success as well as for creating a legacy at Denison. Winnicki was one of only nine students to receive this honor.

In presenting the President's Medal to Winnicki, Professor of Philosophy and chair of the faculty Steven Vogel said of Winnicki, “Sarah, your four years at Denison have been marked by unparalleled ability, ambition for learning and a record of accomplishment that is staggering. Inducted into Phi Beta Kappa as a junior, named a fellow in your double majors of biology and history, and chosen as an Anderson Scholar and member of the Phi Alpha Theta honor society, you have a long list of academic accolades, including an impressive 4.0 grade point average. Your hard work and endless energy have made my faculty colleagues in the history department wonder if, like the 6th Century Byzantine Emperor Justinian, you never sleep! You came to Denison with the long-term goal of attaining a PhD and studying bird ecology and conservation. Your love of ornithology has been shown not only by your curation and care of Denison's collection of bird skins and eggs, but by your resea rch both on campus and off. Your work in a Research Experience for Undergraduates program at Ohio State's Stone Lab resulted in three presentations at national and regional professional meetings. Continuing your subsequent summer research of Grasshopper Sparrows while carrying a full course load has made you one of Denison's most qualified candidates for graduate schools. The National Science Foundation must agree, as you have been honored with a Graduate Research Fellowship for Life Sciences - Ecology. Your history professors tell similar stories about your admirable work ethic driven by an intense curiosity to understand more about the past, to recover lost voices — especially those of women — and to engage in the joy of intellectual discovery. Your professors have called you 'a keen observer who brings a scientist's methodical, systematic approach to the comparative study of historical texts.' Your notable accomplishments also have extended to y our co-curricular activities, as an accomplished member of the wind ensemble, a tutor, president of the Quidditch Club, and a volunteer at a local historical society. Your involvement as a committed member and secretary of Denison Hillel, despite not being Jewish, exemplifies your commitment to inter-religious understanding and to building bridges across faiths on campus. Sarah, we will miss your keen mind and eagerness to learn, and know that you will excel in your studies of biology at Kansas State University.”