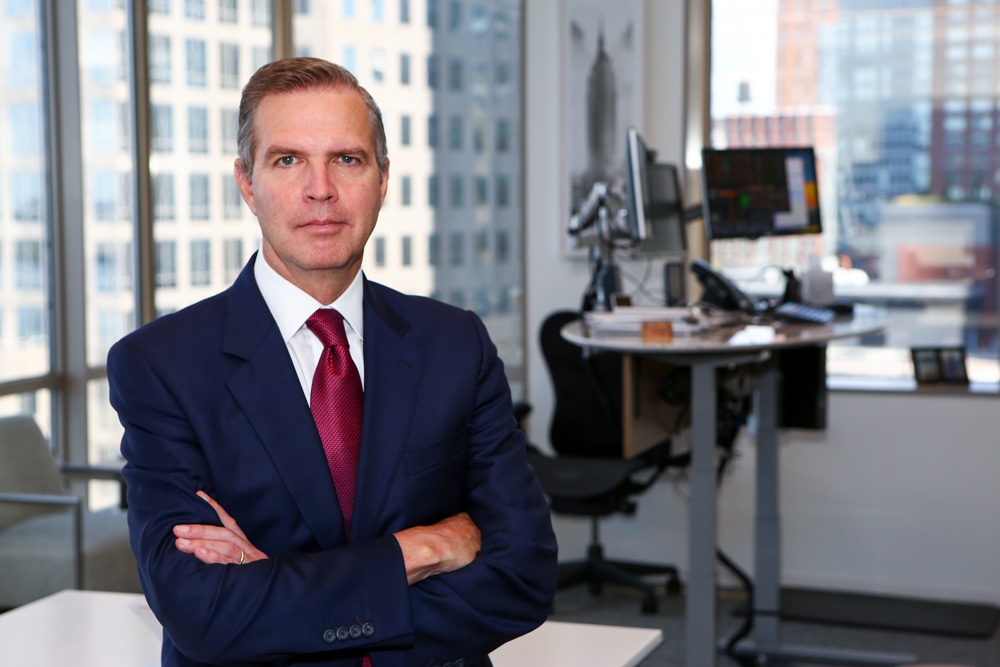 From his position as Chairman and CEO of OppenheimerFunds, a leading global asset manager, Art Steinmetz ’80 can trace his experience managing money back to his days at Denison. He served as treasurer for both Kappa Sigma, his fraternity, and for the Muscular Dystrophy Dance Marathon.

“There are some pictures of me sitting in the cafeteria manager’s office, filling up bowls with quarters,” Steinmetz recalls. Those humble beginnings may have foreshadowed a career in which millions of investors now trust him and the firm he leads with their hard-earned dollars and with their dreams for the future.

Steinmetz was a student of Russian literature and Slavic studies at Denison. After graduation, he spent time training to be an Air Force pilot and earning an MBA from Columbia University. He entered the investment industry in 1983, when he became an analyst at PaineWebber.

He joined OppenheimerFunds in 1986, a year before “Black Monday.” On Oct. 19, 1987, the Dow Jones Industrial Average plunged 22.6 percent — its worst one-day loss in history.

The trial by fire of that market crash taught Steinmetz an important lesson. “I was a junior person at the firm, and the portfolio managers and analysts got together in a room to discuss what had happened,” he recalls. “They were asking, ‘Is this 1929 all over again? Should we sell everything? Or should we increase our positions in these suddenly very inexpensive securities even more?’

“I was a rookie and didn’t really have a voice at this table, but I listened to those senior investors, who unanimously saw the downturn as a buying opportunity. They kept a cool head, and they concluded, ‘The world hasn’t come to an end. The world is the same today as it was yesterday.’”

The company flourished that year, and that experience taught Steinmetz the value of staying calm and not panicking during times of crisis. That approach, along with his talent as an investor and leader of teams, has helped him take on ever-increasing roles at Oppenheimer.

In 1989, Steinmetz created and launched one of the first multi-sector bond funds in the industry, Oppenheimer Global Strategic Income Fund, which he managed for 25 years until he was named CEO. During these decades with OppenheimerFunds, Steinmetz became chief investment officer (CIO) for the firm’s fixed income department and then CIO for the entire firm. In 2013, he was named president of the company, and then over the next two years, was named CEO and chairman, as well.

In his leadership roles, Steinmetz has overseen several prominent acquisitions. As the firm’s chief investment officer, he led the effort in 2012 to acquire SteelPath, which offers investments in energy infrastructure through master limited partnerships.

In 2015, he helped the firm enter the Smart Beta and ETF markets with the acquisition of VTL Associates’ RevenueShares. In 2017, he helped the firm expand its municipal bond offerings through the acquisition of SNW Asset Management, which focuses on high-quality municipal bonds. He also drove a joint venture that OppenheimerFunds established with The Carlyle Group to bring private credit investments to high-net-worth clients.

Abilities in math are obviously a key component of a career in finance. Steinmetz admits he didn’t particularly like the subject in his early years as a student. But, now recognizing how critical math is to so many fields, he has been committed to fostering enthusiasm for the subject among young people.

He is on the board of the National Museum of Mathematics, and Steinmetz himself occasionally takes the stage at the museum to teach elementary school students as part of “Infinite Potential,” an initiative OppenheimerFunds sponsors to accentuate the “fun factor” in mathematics. He believes that eliminating the dread some students feel about math can help foster greater interest in the STEM fields.

Steinmetz’s efforts on this front have been recognized. The YWCA of New York City named him Man of the Year for his work that encourages women and minorities to pursue STEM careers.

Not everyone might have predicted a career in finance for a young man who focused on Russian literature and Slavic Studies—as he inserted New Wave bands into his song lists as a deejay for WDUB. In retrospect, it all makes perfect sense to Steinmetz, as he now can see how his undergraduate experience set the stage for his future.

“Like a lot of kids, I had no clear idea what I wanted to be when I grew up. I didn’t leave Denison with clarity — but I received exposure to a lot of diverse experiences that I could draw on in guiding me in the years to come. This was a great gift.”

For investing tips from the OppenheimerFunds chairman and CEO himself, visit The Denison Magazine