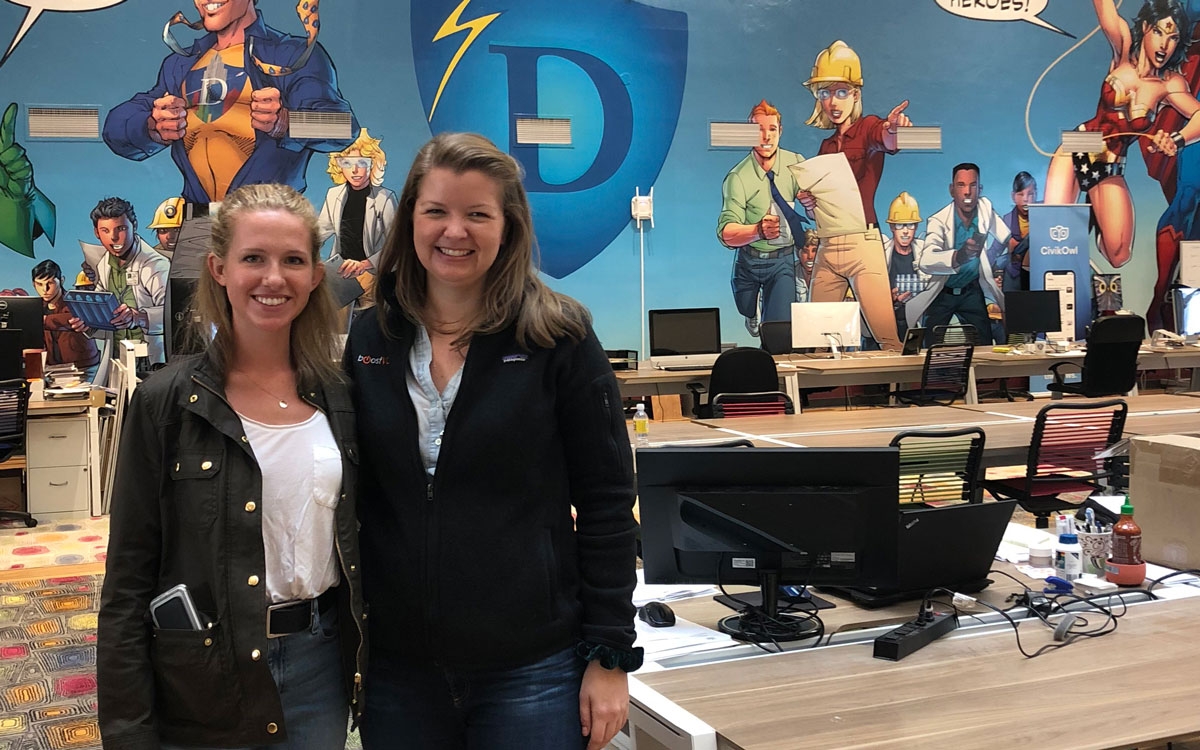 A pre-med major when she first arrived at Denison, Maddie Callander ’08 took an elective course that changed her direction. An art history class about oceanic art captivated her — and led to her current work with a venture capitalist firm. The transition is more straightforward than you might think.

Callander works with companies in the early stages of developing tools that use visual components, most frequently virtual reality. At this stage, the work is mostly about ideas. She examines these ideas, looks at the background, the social need and international support for the products they propose, and asks why the founders care so much about the product.

Her job draws on the skills that Callander learned in her art history and visual culture classes. “In many ways this is like looking at a work of art: you are looking at new opportunities to see what you can find, but you are not looking to see just what is obviously in front of you—what everyone else can see — you are looking for the things just below the surface,” she says. “I look for what you see by looking obliquely — what makes the opportunity (or object) unique, different, or significant in some way.”

As in her work with art history and visual culture, she is finding the below-the-surface information that drives the system, that communicates on a deeper level, or that leaves us feeling better or worse about ourselves, comforted or disrupted, ennobled or degraded. This reminds Callander of what Professor Joy Sperling said about women artists in New Mexico in the 1920s, where they were not often seen because everyone was looking at the men’s work.

What it’s like to study Art History and Visual Culture?

After that pivotal class on oceanic art, Callander kept taking art history courses as electives until, at the end of her sophomore year, she found she was on track for an Art History and Visual Culture major and a Spanish minor. Callander added a study abroad experience in Madrid to her education. She lived near the Prado and combined her interests in art history and Spanish.

Then, back at Denison her senior year, Callander focused intensely on her senior thesis. She loved the way Karl Sandin examined the cityscape, especially the way he discussed theory, ritual, and the visual object lived in the world. She said that it almost felt like an anthropological study. It gave her a new way of looking at the world.

From graduation to the workforce

When Callander graduated at the height of the recession in 2008, her only options seemed to be graduate school or the workforce beyond art history. Museum and gallery work dried up completely during those years, and although she was interested in museum studies, Callander didn’t really see herself working in either place. She wanted to apply her skills in theory and visual culture more actively in the real world.

Callander found that her major prepared her for marketing.

For example: shoe sales: “If I have a shoe I want women in their mid-thirties to buy, I have to approach it, in the same way I would approach a piece of art,” she says. “I ask: what do people see when they walk into the store? What do you say to these people to draw in their interest?” The same applied to her work in real estate where she says, “It’s all about looking, enticing, and engaging with the customer.” In other words, it’s about curating experiences.

She also worked as an event planner for a private aviation company and later, in San Francisco, for an end-of-life care system. In both these positions, Callander drew on her abilities in very different ways to curate a system of experiences and facilities from the visual, physical, and emotional perspective of the customers and their well-being.

In the end-of-life care system, for instance, the challenge was to create a series of products and experiences to support and assist people through the traumatic experiences of end-of-life. She described the process as follows: “Think about the Holocaust Museum. You have to prepare the visitor for the trauma they are going to see in the exhibit. And conversely, you want them to leave with hope — with a good feeling.”

After some time, Callander realized that she wanted to empower and fund worthy companies headed by women like herself working around disruptive technology. She entered a graduate program on venture capital at Draper University, founded by Tim Draper and Elon Musk,. Callander was impressed by the Sutter Hill Ventures book. She gained a lot of knowledge and learned to code. After graduation, she was hired to train venture capitalists, and six months later she was hired by Adam Draper’s team to put together a similar training program for current venture capitalists. Now she works to seek out and educate venture capitalists around the world, who perhaps don’t have the same resources she had in Silicon Valley, on how to invest in business wisely.

Ironic as it may seem, Callander concludes that art history and visual culture is probably “one of the most entrepreneurial majors because” [ just as in Venture Capital] “you are [always] trying to find what is not blatantly in front of you.”