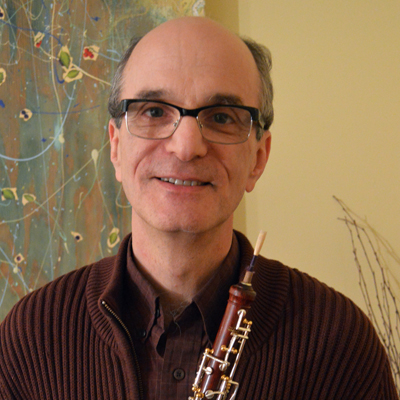 Steve Rosenberg is Instructor of Oboe and Chamber Music at Denison University, a position he has held since 1983. He currently performs with the Central Ohio Symphony and Newark Granville Symphony Orchestra, and is a member of the Rococoa Wind Quintet. For ten years he was a member of Pro Musica Chamber Orchestra of Columbus. He has performed with the Columbus Symphony, Opera Columbus Orchestra, BalletMet Orchestra, and Broadway Series, among others. An active free lance musician and chamber music player, he performed the Mozart Oboe Quartet with the renowned Jacque Thibaud String Trio and the world premiere of Petite Suite for Oboe and Bassoon by James Geiger at Denison University. He played with the Lancaster Festival Orchestra in the award-winning Marquis Classics recording of works by Pulitzer Prize winning composer William Bolcolm. While in high school Steve was a student of Jerome Roth of the New York Philharmonic. He attended Oberlin College, where he studied oboe with James Caldwell and received a degree in Music and Psychology. He currently serves as Orchestra Manager of the Lancaster Festival in Ohio.