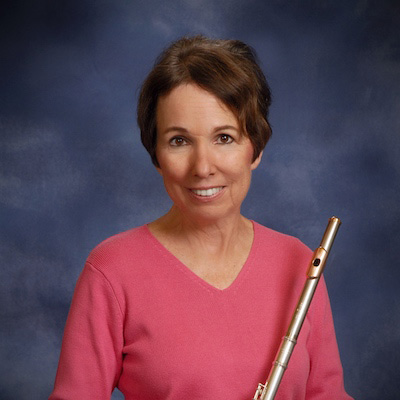 Linda L. Habig, flute, holds a Bachelor of Music degree in flute performance from Baldwin-Wallace University (Ohio), and studied with prominent teachers in New York, Cleveland, Philadelphia and Chicago. Her primary teachers were Frances Blaisdell, William Hebert, and Kenton Terry, and she has also studied with Susan Levitin and Wendy Stern.

A member of the Heisey Wind Ensemble, she has also played with regional orchestras and ensembles in Chicago, New Jersey, and central Ohio. She is the founder and director of Wind and Wood Players, a collaborative chamber ensemble formed in 2018; the group of five wind and string players focus on providing community education and enjoyment at the intersection of music and the natural environment.

Linda also maintains a private flute studio, and additionally collaborates with band directors and music programs in central Ohio schools, bringing enrichment and education to students of all ages through performance and interactive group classes.

Linda is a registered flute instructor with the Suzuki Association of the Americas; she has taken Suzuki teacher training at the International Flute Institute at Eastern Tennessee State University, the Berkshire Flute Institute at Williams College, Mass., and the Great Lakes Suzuki Institute in Hamilton, Ontario, among others.

Prior to 2004, Linda had an extensive career in corporate finance, managing a securities line of business for a major multi-national bank.