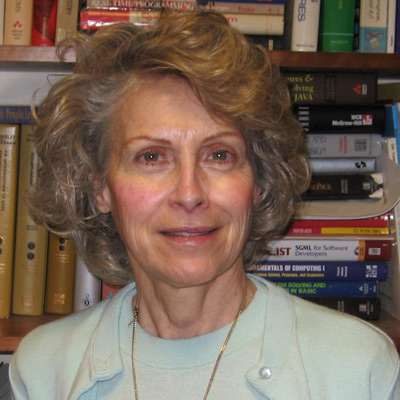 Joan Krone joined the Denison faculty in 1990, having taught mathematics at Ohio Dominican College before earning her Ph.D. in Computer Science from the Ohio State University, where she taught Data Structures and Algorithm Analysis before coming to Denison.

Her research is in the mathematical foundations of computer science, emphasizing mathematical reasoning about the formal specification and verification of software in the context of software engineering principles. Krone is a strong advocate of undergraduate research and has served as mentor to more than 30 undergraduate research students, many of whom have presented their work at professional conferences. She developed a discrete math course that introduced computer science applications of mathematical concepts and co-authored the textbook “Essential Discrete Mathematics for Computer Science” with Todd Feil. In addition to teaching computer science Krone is the Associate Director of the Lisska Center for Scholarly Engagement, which oversees the summer research program at Denison, as well as serving to advise students applying for a variety of prestigious scholarships such as Fulbright, Marshall, Rhodes, and others.

My research lies in the field of formal methods for software engineering. The focus is on the formal specification of software in the context of software engineering principles developed by experts in the field over decades of research and practice. Recent NSF funding has supported the design and development of a new language, RESOLVE (REusable SOftware Language with VErification), that includes constructs for formal mathematical specifications to promote mathematical reasoning and proofs of program correctness. Krone’s work has included both the development of logic for reasoning about program correctness and the development of material needed in the computer science curriculum to support mathematical reasoning about programs.

The summer scholar program gives students the chance to pause in their broader interests and engage one topic in depth.