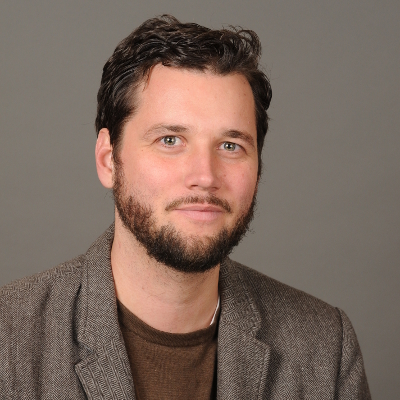 Jesse Schlotterbeck received his Ph.D. in Film Studies from the University of Iowa in 2010 and began a tenure-track appointment with the Cinema Department in 2011. His research focuses on American film genres – in particular, the musical, the biopic, and film noir. The Spring 2020 semester he is teaching Film Aesthetics and Analysis (CINE 104) and Documentary Film and Media (NJ 250).

His publications in print include:

Additional essays appear in Film Noir: The Directors (Limelight, 2012), Movies in American History: An Encyclopedia, and The Concise Routledge Encyclopedia of the Documentary Film.

Dr. Schlotterbeck has served on the Student Research Grants Committee and the Academic Standing Board at Denison. He has also worked as a June Orientation faculty advisor, a meditation instructor at The Open House, a planner and leader for the Philadelphia Arts pre-orientation trip, and as a group facilitator for the Restorative Justice initiative.