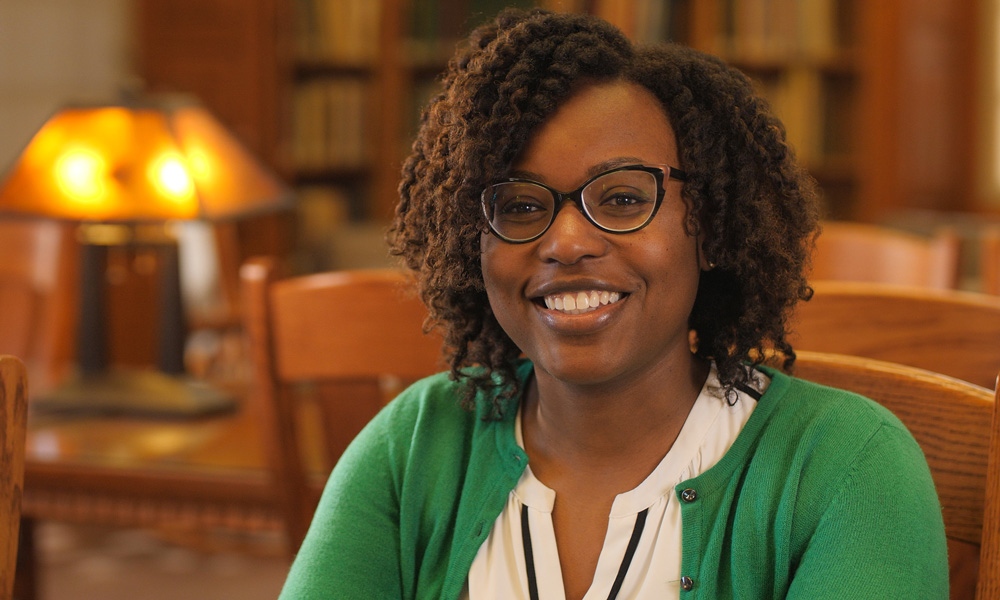 Associate Professor and Chair of Anthropology and Sociology Fareeda Griffith

Associate Professor and Chair of Anthropology and Sociology Fareeda Griffith has been named as a Columbus Business First “40 Under 40” honoree. Griffith is a positive force in Columbus and at Denison. She is an accomplished scholar with a long list of publications and invited presentations at academic conferences. She serves as a faculty mentor to the student cohort of the Denison/Columbus Scholarship, a full-tuition scholarship offered to up to 20 high-achieving Columbus-area high school students. Griffith also is a past fellow of the African American Leadership Academy in Columbus.She was nominated for the award by Evelyn Smith, legal counsel at Global Logistics and International Trade, Dell Technologies.

Denison University President Adam Weinberg said, “Fareeda has become a leader in developing models for faculty mentorship of students. She cares about, connects with, and catalyzes student engagement better than anybody I have worked with in my almost three decades of work in higher education. Likewise, she does it in ways that encourage and help other faculty do the same.”

One shining example is Griffith’s work with Sisters in Dialogue, a mentoring circle for undergraduate women of color at Denison. Griffith regularly meets with them as a group to talk about college and to focus on pertinent issues. This includes meetings on campus, dinners at her house, and events she organizes with Denison trustees, members of the Columbus community, and other visitors as a way to push the students and help them develop a range of skills and habits.

Commenting on Griffith’s work in mentorship, Weinberg said, “Sisters in Dialogue is one of the best mentoring projects that I have seen in higher education. Fareeda has a special capacity to connect with others and to get them to open their minds to new ideas and ways of being. When I meet with the students involved in the group, they describe interactions with “Dr. G” as the single most transformational aspect of their Denison experience. When I watch Fareeda with the students, I understand why.”

Director for the Center for Black Studies and Associate Professor Toni King noted, “The presence of the Sisters in Dialogue mentoring program has palpable positive reverberations throughout the campus culture.Fareeda has publications in the works to write about this work—and perhaps bring this culturally responsive programming to the national stage.”

As a quantitatively trained sociologist and demographer, Griffith advises students on research projects with interests in quantitative methods, and teaches courses on global health, demographic changes in the continent of Africa, survey research methods, and racial and ethnic relations around the globe. She received her Bachelor of Arts in sociology with summa cum laude honors from Paine College. She received a master’s in demography and a doctorate in sociology from the University of Pennsylvania. Additionally, Griffith has published on race relations and residential segregation patterns in South Africa and Somali immigrants and health perceptions in Columbus, Ohio. Her work appears in the International Handbook of Population, Southern African Journal of Demography and Health, Culture, and Society. Griffith also has received several grants to investigate racial residential segregation and chronic health outcomes in Rio de Janeiro, Brazil, and health perceptions of Somali immigrants in Columbus.

Now in its 27th year of recognizing emerging talent in the Columbus community, 40 Under 40 is Columbus Business First’s longest-running awards program, as well as one of its most competitive. The 2019 Class will be highlighted in a special section published online and in the May 24 issue of Business First. An awards gala is scheduled for Thursday, May 23, at the Renaissance Columbus Westerville-Polaris Hotel.

Built on a foundation of academic breadth, depth, and rigor and lasting relationships, Denison University unlocks the potential of our students to be architects of their own lives. We create pathways for our students to quickly make friends and find mentors. We help them figure out what kind of lives they want to lead, and we help them develop the skills, values, habits, networks, and experiences to launch into professions so they can build those lives. As Denison continues to build upon its strengths, our focus is on deepening mentorship; expanding the liberal arts curriculum; reinventing the career exploration process; and leveraging our close proximity to Columbus, one of the nation’s best cities for the arts, internships, and entrepreneurship.