Charles St-Georges, assistant professor of modern languages at Denison University, explores Hispanic horror films in his book, “Haunted Families and Temporal Normativity in Hispanic Horror Films: Troubling Timelines.” The book examines horror films from Mexico, Spain, and Argentina in their respective historical and cultural contexts. He makes clear the power structures through which we experience normativity, as well as a collective fascination with the phenomenon of haunting.

Since horror films are often geared towards a youthful demographic, many academicians write them off and do not consider their value. St-Georges doesn’t agree. “I think we can have some really meaningful conversations if we take things from pop culture and look at them academically.”

St-Georges’ cousin, an avid horror fan, sparked his interest in horror films. At first, he watched them to appease her, but as he delved deeper into the realm of Hispanic horror, he was inspired to write academically about the ideological repercussions, such as sexism and racism, that are often written off as cheap thrills in popular horror films.

During his research, St-Georges aimed to address specific questions regarding intersectional issues, such as how race, gender, disabilities, and age are presented in horror films. One Argentinian film, “Los Inocentes,” or in English “The Innocents,” covered all of these points. “I didn’t expect myself to be writing about Afro-Argentines,” St-Georges says, “but I had to do a lot of research since it was something I had not studied prior. It was fascinating.”

St-Georges gives credit to his students for improving his own writing. “It’s the teaching at Denison that helped me write better, simply because I found that if the audience I had in mind were my students, then I do a much better job of clearly articulating what I’m talking about,” he says. “In academia, it’s important to be smart, but it’s also important to be readable and that’s something that is overlooked.”

Scholarship on Latin American horror is just beginning to be explored. In fact, St-Georges’ book is the first to look exclusively at ghosts in films from Spain and Latin America. For his next book, St-Georges wants to examine the 1950s in Argentina and the historical context that creates these horror films. “Fear is thought to be universal, but in my opinion, fear is highly ideological and contingent on time, place, and culture.”

For those who want to check out his book in the library, St-Georges encourages you to stick with it. Though the first chapter is quite theoretical, the rest is quite accessible and focuses on concrete examples from specific films. 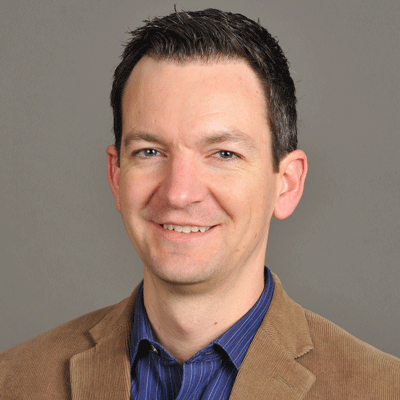