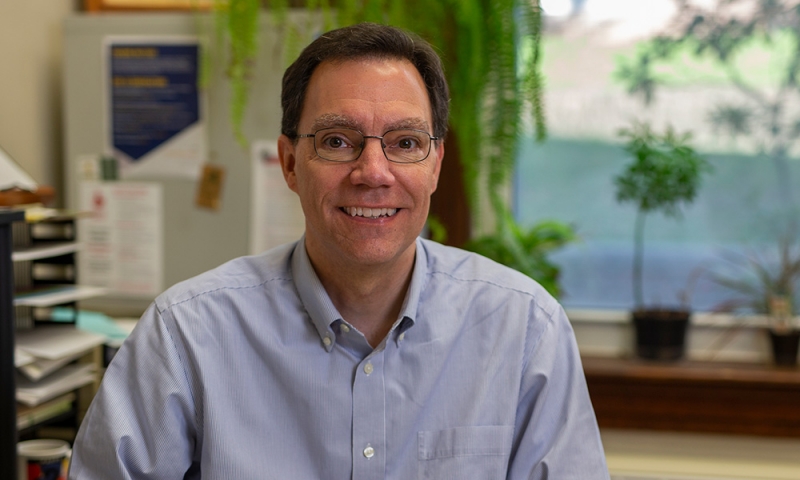 Doug Spieles, professor of environmental studies at Denison University, outlines how environmentalism can be described in terms of six human values—utility, stability, equity, beauty, sanctity, and morality, in his book “Environmentalism: An Evolutionary Approach.” The premise of the book is that environmental dilemmas are products of biological and sociocultural evolution, and that through an understanding of our own evolution we can reframe debates of thought and action.

Spieles started writing the book to sort out his own thoughts on environmentalism, a topic he has been teaching for 20 years. “I started it as an exercise in solidifying my own thoughts,” he says, “and I didn’t know where it would take me.”

There are many conflicting ideas surrounding topics of environmentalism, including the debate as to whether human interest is more important than environmental values.

“There are lots of opposites in environmentalism,” Spieles says, “so part of the idea of this book was to look at those dichotomies, wrestle with them and see if there is a way to reconcile them.”

Spieles’ book grew out of questions that came out of the classroom. In the spring of 2019, he is teaching a first-year writing workshop on the topic of this book, called “Exploring Environmentalism.” “Come to think of it,” Spieles says, “that could have been a better name for the book.” The course will aim to answer the questions brought up in the book regarding what environmentalism means, and why there are so many differing views in the discipline.

As an ecologist, Spieles comes from a science background, but he interacted with perspectives from multiple other disciplines. “As I researched the book, I really came to realize how broad the concept is,” he says, “there’s everything from spiritual faith-based aspects of environmentalism, to maximum sustainable yield and capitalist views that also think of themselves as environmentalism, and those are totally different ends of the spectrum. I don’t think I realized the scope of how broad this subject is.”

Spieles was pushed out of his comfort zone while writing this book. “I had to think like an economist, a social scientist, a philosopher, and a variety of other ways,” he says, “that made me bang on some doors of other colleagues around campus in different departments because I wanted their feedback and perspective.”

Spieles also shared bits of the book with students and received feedback from them as well. “I wanted them to give me feedback on the book before it was published because I wanted to incorporate their views,” he says, “and a lot of times they came up with questions I hadn’t thought of.”

“Environmentalism: An Evolutionary Approach” is Spieles’ second book project, but will most likely not be his last. “One work really opens questions more than it answers anything, so it leads to the next work,” he says. Spieles aims to work on a few smaller projects before taking on his next book project.

Mulberry House
Mulberry House is home to a 1100 square foot lab with tools to help artists explore intersections of their disciplines.