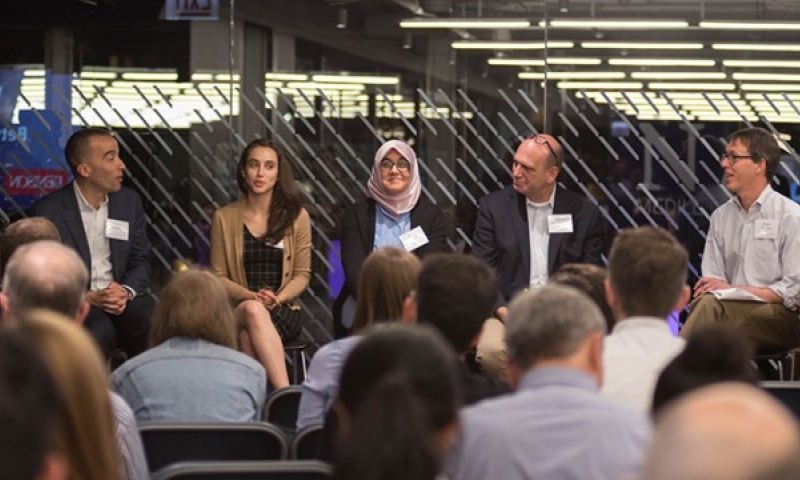 Two years ago, the nation woke up to the fact that the voices of a large majority of people in the middle of the country were not being heard. Denison University English professors Jack Shuler and Mike Croley were frustrated about the stories the national media had missed. They heeded a Facebook call by journalist and author Ted Genoways, as he reached out to writers from states that seemed to have been overlooked and whose stories weren’t being heard.

Shuler and Croley pooled their connections and resources to create a new entity, Between Coasts, with a mission to advance stories about people in the rural areas, small towns and large cities in the heartland of the U.S. Between Coasts publishes an online magazine specifically for these stories. It also holds a semi-annual conference for writers, reporters, producers, photographers and editors to gather and strategize how to champion underreported stories and get them before a larger audience.

Denison hosted the first and second Between Coasts conferences in January and September 2017. This April, Between Coasts widened its scope. Northwestern University’s Medill School of Journalism hosted the two-day conference. Nearly 80 journalists attended on May 4-5 in Medill’s downtown Chicago newsroom.

“We’re trying to do a couple things,” said Peter Slevin, Medill associate professor of journalism. “One is to support reporters and producers – freelance and fulltime – who don’t have the backing of big news operations. Another is to find ways to get underappreciated stories and issues in front of larger audiences. A third, and this is the issue that is newest, is to get those stories to small and mid-sized outlets, whether print or broadcast, around the country.”

In his welcome letter to participants of this year’s gathering, Croley, assistant professor of English at Denison, emphasized the original intent of the forum and widespread concerns over “the seeming lack of reporters and reportage in the middle of the country. The idea was to be a corrective and to raise our hands and say we have been here all along while you ignored us, our stories and our pitches.”

“The success of the conference is reflected in the enthusiasm of our participants — first-rate writers and editors — who are committed to telling the stories that tell the truth,” said Croley. “Their commitment to journalism is inspiring and not only gives us hope for the future, but is helping us find solutions for how to get stories to the people that matter: citizens.”

Shuler observed, “We hope to continue this work of finding ways to tell stories from often overlooked or underreported places, especially the Rust Belt and rural America. Between Coasts is becoming an important network for sharing contacts and ideas about how to do this work better.” “The challenges facing local news, especially, are huge, but there is so much valuable work being done,” Slevin added. “We want to connect those great stories with the audiences near and far that most need to see them.”

Slevin and Shuler, associate professor of English and chair of journalism at Denison, worked closely putting together the workshop this year, along with Stacy Hetherington Simpson, Medill’s special events manager, and Tim Franklin, professor and senior associate dean at Medill. Alex Kotlowitz, author, writer-in-residence and senior lecturer in journalism at Medill, served as a consultant on the forum.

“The conference was a response to the dire cutbacks at newspapers in mid-sized and small cities and the fact that journalists so missed the angst and anger between the coasts,” explained Kotlowitz. “For two days, participants celebrated the best of local journalism and prodded journalists to think about how they can reconnect and re-engage with the middle of the country. It was an exhilarating couple of days.”

Slevin outlined a number of highlights of the conference, including that:

“Between Coasts was not your typical news media workshop,” said Slevin, one of this year’s co-hosts. “By design, it was small, eclectic and full of people with energy and ideas. It was inspiring to see reporters, editors and filmmakers from Ohio and Montana, Colorado and New York, West Virginia and Illinois, trading smart thoughts about the most demanding moment for journalism in modern American history.”

Denison and Medill plan to continue holding the Between Coasts conferences at their respective universities in Granville, Ohio, and in Chicago.

Sigma Chi
Built in 1930 for the Sigma Chi Fraternity, this building is home to University Communications and Emeriti Faculty.