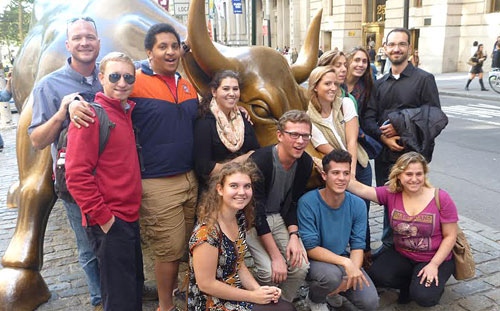 The odd pairing of an economist and a paleontologist proves successful

Is the economy actually a broad ecosystem? Professors Quentin Duroy and Dave Goodwin, of economics and geoscience, respectively, joined forces to explore the similarities between the principles of ecological theory and economic theory in a Denison Seminars class, titled “Ecolonomics: The Economy as an Ecosystem.”

While ecolonomics may be a new idea to most, it’s not really that far-fetched. The systems of both fields have specialties in macro and micro theories, and confront multiple scenarios about the effects of change and how they ripple through systems.

“It became clear to me how important and intriguing it is to bring together two separate fields to truly address the questions we were asking.”

Ecolonomics postulates that either economics sits inside ecology, overlaps with ecology, or is completely separate. To evaluate these ideas, Duroy and Goodwin set up three socioeconomic scenarios to explore: radical change, incremental change, and no change. The class researched, analyzed and discussed what they thought were the most likely scenarios that global society should follow in response to certain situations.

As an example, Goodwin noted, “The idea of unfettered economic growth seems untenable, so if you’re forced to confront the ideas of carrying capacity and sustainability, then endless economic growth is not a reasonable way to operate in the long run.”

For Professor Duroy, one of the highlights of the seminar was the students’ capabilities, which made the class successful.

“What I think we found remarkable is that we had students with a lot of different backgrounds. We threw some pretty complex things at them. They responded very well — we were really impressed with their ability to interpret the literature.”

Alessandra Cancalosi ’17, an environmental studies major, described the course as the most interesting class she has taken so far.

“As the class progressed, it became clear to me how important and intriguing it is to bring together two separate fields, with two professors who may not have had a complete understanding of the other’s field, to truly address the questions we were asking,” said Cancalosi.

“Human economies exist within an ecological context because there are aspects of both fields that are parallel in structure and function,” said Molly Burke ’16, economics major and Anthropology & Sociology minor. “I was able to draw unique parallels between ecological theories and saw them reflected in our current economic system.”

The class put their theories to the test. The group spent fall break of 2014 in New York City to see how ecological and economic theories unfolded in real life.

The class met with researchers at Columbia University's Earth Institute and visited the Museum of Natural History, the High Line, the Chelsea Market, Central Park, Times Square, Ground Zero and the Financial District as they searched for parallels between economic and ecological theory.

“Our trip to New York City was absolutely a highlight of the class,” said Cancalosi. “Being able to put to use our readings and animated class discussions in a real-life setting was such a unique experience. I loved gaining an outside perspective on class materials while interacting with the city.”

Likewise, the professors learned through the seminar.

Duroy said, “The difficult part in designing a class that you co-teach is that you lose some control and you don’t know exactly what the other person is going to do. You have to be ready to improvise.”

“I think that for me as a learner, I found it to be tremendously rewarding. I walked out of classes saying, ‘wow I never knew that idea existed,’” added Goodwin.