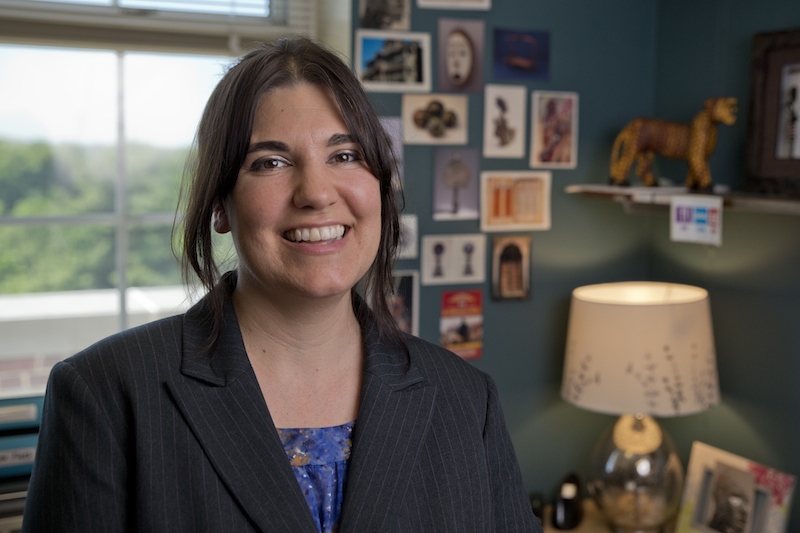 Professor Joanna Tague is a historian of Sub-Saharan Africa. And this year, as a recipient of a prestigious Woodrow Wilson National Fellowship, she will be pursuing her research in Tanzania.

“I first went to Africa with the School for International Training,” said Tague, who spent the part of her junior year in Zimbabwe, focusing on nation-building and rural development, while she was an undergrad at George Washington University.

The fabled continent continued its siren call. After graduation, Tague was a Peace Corps volunteer who lived in South Africa for nearly three years as part of one of the first groups to work there after apartheid. And as a graduate student at University of California, Davis, she based her research topic on displaced populations and refugees in Africa.

“The Woodrow Wilson Fellowship validates both my teaching and my research. By providing me with time for scholarship, I can be a dedicated teacher as well as a productive scholar — with the ability to balance both.”

Now Tauge is an assistant professor of history at Denison, and the Woodrow Wilson Career Enhancement Fellowship will support her book project, which explores refugee settlement, rural development and international humanitarianism during Mozambique’s war for liberation from Portugal (1964-1974).

Nearly one hundred thousand Mozambican refugees arrived in Tanzania during this time. It was an unprecedented crisis that forced the international community to rally their humanitarian interests. Tague’s research probes a broad spectrum of responders—the United Nations, the Tanzanian government, the U. S. government, NGOs, ecumenical relief agencies, and American civil rights activists — examining how and why they provided humanitarian assistance during the war for liberation. She argues that these groups looked at African refugees not as burdens but as opportunities they could harness to meet their own agendas.

During her fellowship year, Tague will return to Tanzania to conduct follow-up interviews with former Mozambican refugees and Tanzanian citizens—those affected by Mozambique’s war for liberation, and those who resided at or near the refugee camps in the 1960s and 1970s.

During her many visits to Tanzania, Tague became fluent in Swahili, which will aid in her research. “I learned one language while in Zimbabwe and another in South Africa, before I acquired Swahili,” said Tague. “Once you learn one African language, it becomes easier to learn others.”

“We’re so committed to teaching at Denison. We’re honing our craft, giving most of our time to our students and classes,” said Tague. “But that makes it more difficult to advance our research. The Woodrow Wilson Fellowship validates both my teaching and my research. By providing me with time for scholarship, I can be a dedicated teacher as well as a productive scholar — with the ability to balance both.”