The Global Studies Seminar presents "Interplay of Ethnic Nationalism and Islam with the Nation: Building of Kazakhstan." 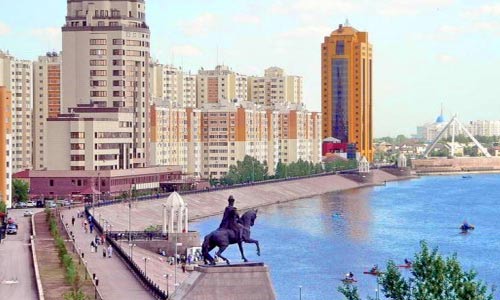 The Global Studies Seminar welcomes Damira Sikhimbayeva, research fellow at the Institute of Philosophy, Political Science, and Religious Studies in Almaty, Kazakhstan, presenting “Interplay of Ethnic Nationalism and Islam with the Nation: Building of Kazakhstan.”

The collapse of previously powerful soviet ideological space allowed the post-soviet citizens to rethink and re-define their social identities. The problem of construction of national identity is one of the mostly debated and still unresolved issues in academic, cultural and political agenda. All the newly formed countries have been striving to alienate themselves from the soviet past and to develop their pre-soviet national identities. But the legacy and consequences of the soviet ideology continues to exert significant influence on nation-building processes.

If the former soviet nations could revive and strengthen their ethnic identity through the own ethnic values, language, literature, history etc., they could not restore their previous religious identity due to severe official secularism. This problem is especially acute for Central Asian countries that struggle to reconstruct Islamic identity in the conditions of complete destruction of traditional Islamic institutions and teachings. The new Islamic identity has been mostly constructed on external influence and sources and causes a certain concern among state authorities as well as nationalists, people with strong ethnic attachments. Currently, strong Islamic identity is widely condemned by public and mostly excluded from nation-building process. The debates on new Islamic identity often occur in public and political realms, however with less academic attention to the issue. Sikhimbayeva will focus on complex interplay of ethnic nationalism and new Islamic identity within the nation-building of the post-soviet Kazakhstan and its impact on national and religious policy.