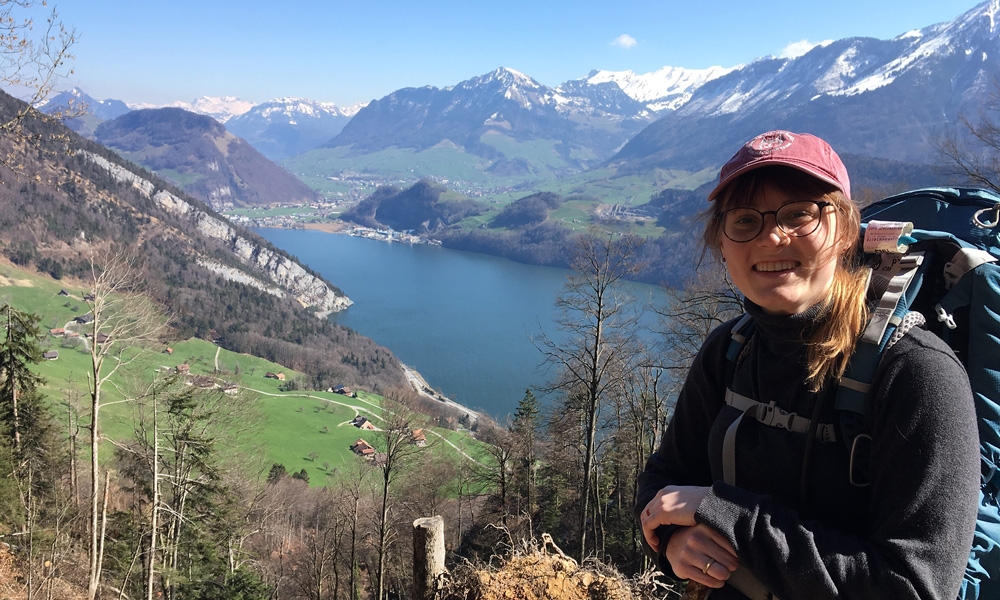 Abbott backpacking in the Swiss Alps during one of her spring breaks.

Rachel Abbott ‘19 has lived a cross-cultural life. She grew up in Cincinnati, but was born in Baden -Württemberg Germany and lived there until the age of five.

Now she will have an opportunity to explore her roots and immerse herself in German culture. One of nine Denison University Fulbright English Teaching Assistantship (ETA) award recipients in the Class of 2019, Abbott will live and work in the German state of Bavaria in the year after her graduation.

“One of the reasons I am so excited about this opportunity is because it’s allowing me to return to the country where I was born and experience it as an adult.” says Abbott.

In her last semester at Denison, the psychology major took an educational studies course with time in a Granville Intermediate School classroom.

Abbott developed close relationships with two 4th grade classes and applied her own classroom lessons in a real-world setting — something she also will draw upon during her Fulbright experience. Those hours spent with school-age children re-shaped her perception of teaching.

“This is something that I am very excited for – getting to know my students and experiencing the joys of learning alongside them,” says Abbott, who is looking forward to applying her skillset to her new community.

“Dr. Baker is the reason I applied to Fulbright,” says Abbott. “He helped me realize my own potential and move past much of my self-doubt and anxiety… He and his wife, Dr. Suzanne Baker, were incredibly generous … they would open the doors of their home to students, providing delicious snacks, love and support. I’m forever indebted to the Bakers.”

“She is a very caring and intelligent person…” says Baker. “Her capacity for empathy and kindness are what make her intellectual insights so reflective. She’s always had a sense of equilibrium and a sort of calm maturity that instilled confidence in others.”

The help and support that Abbott received from the Lisska Center were consistent, reliable, and hugely beneficial throughout the months-long application process.

“I read somewhere online that most people who are awarded Fulbright’s report spending at least 50 hours on the application,” says Abbott. “So, I decided early on to give it all I got.”

Abbott looks forward to exploring the German countryside as an English teacher.

Over the past 20 years, in addition to Abbott, Denison has sent 16 Fulbright English Teaching Assistants to Germany.

The Homestead
The Homestead is a student-run community with a focus on sustainability. It is home to an "earth ship" and houses 12 students in total.