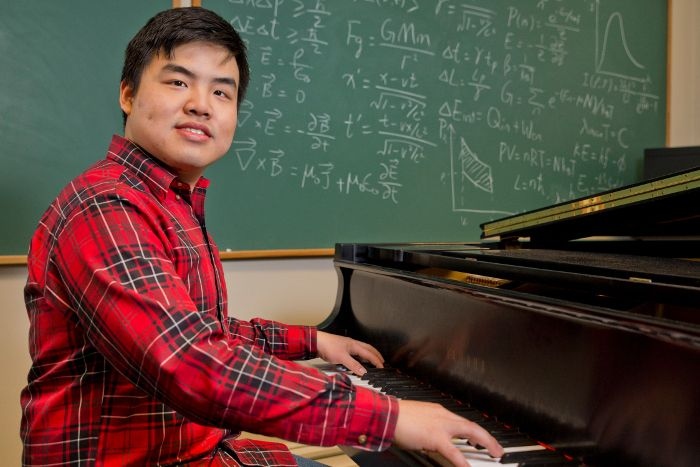 Though all of his time could be taken up with his physics major and research, for Junzhi (Richard) Wang ’16, his minor in piano performance, also is vitally important.

“They work really well together,” Wang answers when asked about his experience with combining the two disciplines. “Physics interests me and helps me to understand the world better, and music is a passion that never gets old.”

Wang knows about music’s staying power. He started playing piano at just four and a half years old. “I quit taking lessons in sixth grade because I had reached a level where they really weren’t helping me very much anymore,” Wang says.

But when he arrived at Denison, Wang began piano lessons again and found that he was engaging with music in a whole new way.

“Music and science should both be things you pursue your whole life.”

“It was a totally different learning experience,” Wang says in reference to his work with Nelson Harper in the music department. “We focused on the music itself and not just on technique. Playing became more about expression and interpretation, not just about hitting the right notes.” As a result of his work and talent, Wang was awarded the Fannie Judson Farrar Music Award at Denison.

For Wang, college is a time to reassess his relationship to music, and to deepen his focus in physics. “I took physics for the first time in middle school,” he says. “But it wasn’t until I took AP physics in high school that I realized it was the science I wanted to study.”

Wang’s study is culminating in the atomic physics research he’s conducting with professors Dan Gibson, Wes Walter, and some of his fellow students. “It’s been a wonderful experience,” he says, reflecting on all that he’s been able to do over the course of his summer research and subsequent senior research. “You do smaller stuff in the beginning, but after that you really have the opportunity to contribute meaningfully.”

During the course of Wang’s summer research, he provided insightful data interpretation to Gibson and Walter that earned him acknowledgment on the poster they presented while at a professional conference in Spain. He’s also presented at a conference of his own, discussing the group’s research alongside his teammates at the American Physical Society’s annual meeting in Columbus.

Though he has feet both in the world of physics and music, there’s not a lot of overlap between them. “They stay separate,” says Wang. But talk to his professors, and another picture emerges.

“Richard did a really good job of finding patterns in light absorption data,” Walter says. “In general, physics and music go along really well together; pattern recognition and creativity add a lot to a lab.”

Harper, too, recognizes that Wang brings something extra to what he does. “He’s unusually inquisitive and has very strong instincts about how a piece should go. There’s some sort of connection that exists between the sciences and music.”

As he prepares to graduate, Wang is applying for doctoral programs in physics and masters programs in electrical engineering. That he’s not going into music doesn’t mean that it’s out of the picture, however.

“I’m never giving up piano,” Wang says. “Music and science should both be things you pursue your whole life.”