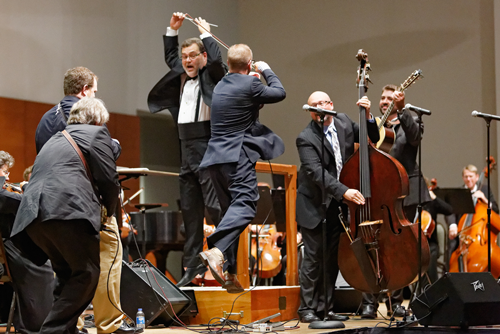 Professor of Music Dr. Andy Carlson appeared as a featured soloist with the Hendersonville, North Carolina Symphony Orchestra, along with the Andy Carlson Band.

Professor of Music Dr. Andy Carlson appeared as a featured soloist with the Hendersonville, North Carolina Symphony Orchestra on September 6th 2014, along with the Andy Carlson Band.

Dr. Carlson performed Mark O'Connor's “Fiddle Concerto” with his own cadenza, his own “Suite for Fiddle and Orchestra,” and the Andy Carlson Band performed several of their own compositions and arrangements with the symphony. Included in their set was, “The Welsh Hills Waltz,” composed by Denison’s Instructor of Jazz Guitar, Mr. Tom Carroll. The Hendersonville Symphony is conducted by Carlson's violin teacher of 10 years, Dr. Thomas Joiner, and the two closed the program with a duet version of the “Ashokan Farewell.”

Andrew Carlson has performed as a soloist and as a chamber musician throughout the United States. Of his 1998 Merkin Hall performance, the New York Times wrote, “Mr. Carlson is a demon fiddler and his performance here was serious and concentrated.” He has earned both a MM and BMUS from the University of Georgia and a DMA in Performance and Pedagogy from the University of Iowa. While earning his DMA, he was the recipient of the Iowa Performance Fellowship and the Pelzer Competition Fellowship. As a soloist, he has performed with orchestras including The Columbus Symphony Orchestra, The Newark-Granville Symphony Orchestra, The Ohio State University Marching Band, The Huntington West Virginia Symphony, The Welsh Hills Symphony, The Land of Legend Philharmonic, and The University of Iowa Symphony. Andrew has studied with Leopold La Fosse and Thomas Joiner.

In addition to his experience as a classical violinist, Andy began learning traditional fiddle music from his grandfather at age 5. He has won numerous fiddle contests and has twice been named the Georgia State Champion Fiddler and was named the 2000 Ohio Grand Champion fiddler. His book entitled A Guide to American Fiddling has recently been released by Mel Bay Publishers. As a studio musician and string arranger he has recorded for Warner Bros., Atlantic, Elektra, Geffen, Polydor, and Capricorn and with artists including R.E.M., Nanci Griffith, Billy Bragg, and the Cowboy Junkies.