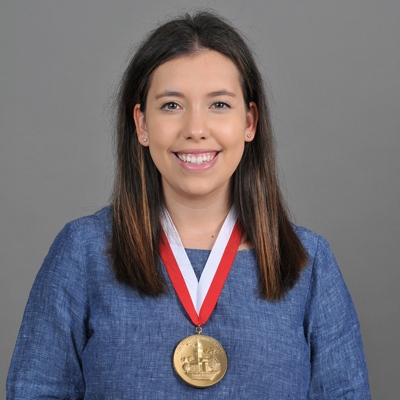 Each year, Denison chooses a select few to receive recognition as a President’s Medalist, Denison’s highest student honor. The preeminent criterion for receipt of a President’s Medal, established in 1985, is academic achievement. In addition, candidates must embody some combination of the following: service to the community, contribution to the arts, enlargement of the community’s global perspective, athletic fitness and achievement, leadership ability and contribution to community discourse.

Fatimah AlZahraa Elghazawi: International Studies and French double major, was selected as a 2021 President’s Medalist. In addition, Fatimah served as her class co-governor and was appointed Denison’s recent student trustee. Her citation reads:

Fatimah, as a major in French and International Studies, it stands to reason that you would have a special interest and awareness not just of France, but in places like Quebec and Haiti, where “la langue de Molière” is spoken daily. What even many Denison students may not realize is how much of the Arab world speaks French on a regular basis. As one of your nominators said, you possess a “deep understanding and practice of cultural empathy.” They go on to say of you, “As an Arab-Polish-American, she embodies hyphenated identities and celebrates cross cultural communication.” So you have participated as a student interviewer in a digital oral history project for Central Ohio’s Arab American Community, learning more about the Arab World, and have been actively involved as a leader in the Denison Muslim Student Association. Beyond academics, your engagement on campus has been broad and far-reaching, from student government, to the Office of Admission and the First-Generation Network. Along with those personal involvements, you have been a tireless and uplifting leader in what we might call a paradigmatic activity of this past year, facilitating weekly group discussions through video conference technology, designed to allow students to practice French outside of the classroom, leading to the obvious question, how do you say “Zoom” in French?

Our alumni share where they are and what they are doing now.

We are celebrating our students who completed research projects in the International Studies department.