Charlie Allen '14 is drawn to the outdoors 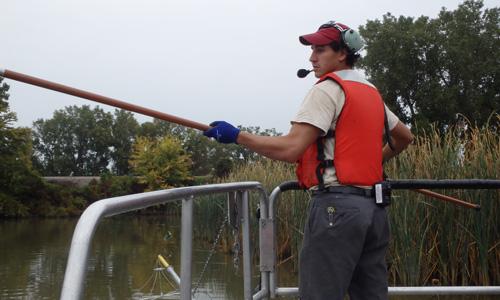 Charlie Allen ‘14, has always been drawn to the outdoors.

The bees are everywhere, on TV, social media, in newspapers. Despite their climbing visibility, bee populations are declining dramatically, resulting in less pollination occurring. Charlie Allen, a Denison alumnus and a contractor at the Ohio Fish and Wildlife Service, is working to monitor and maintain pollinators and their habitats.

Charlie, who graduated in 2014, has always been drawn to the outdoors. It was this drive that inspired him to pursue a major in Environmental Studies and a concentration in Biology. He was also a member of the soccer team and worked on farms such as Granville’s local Bird’s Haven Farms. So when he heard about an opening at the Ohio Fish and Wildlife department through a family friend, he jumped at the opportunity.

There are two main aspects to Charlie’s work. The first is oriented towards policy. The Endangered Species Act demands that, under Section 7, called “Interagency Cooperation,” Federal agencies must consult with the U.S. Fish and Wildlife Service when there’s a chance the agency’s actions may affect listed endangered or threatened species. This means the policy work Charlie conducts mainly revolves around Section 7 consultations, project proposals from said agencies, and letter writing.

In order to understand how to better help bees thrive, Charlie has been monitoring habitats along roadsides. For this work, he records how maintenance, such as mowing, affects the pollinators traveling through the area. Monitoring and attempting to increase bee habitats is the product of both a big drive from the regional office of the Ohio Fish and Wildlife department and a national public push for focus on pollinators. Being on the forefront of Ohio’s initiative is exciting work.

Charlie’s background at Denison has helped quite a lot with his current work. Dr. Spieles’ Wetland Ecology course gave him skills, such as conducting and interpreting surveys, necessary to pursue a career in field work where getting into the nitty gritty, like setting up nets to monitor fish and helping to ID bats, is common.

Environmental Policy with Dr. Kaplan educated Charlie on topics that he had previously not been interested in. When the opportunity arose for a job that included policy work as one of its requirements, Charlie found himself more willing to pursue it than he might have otherwise.

Charlie’s advice to current students is to take as wide a range of classes as possible and to take advantage of the concentration under an Environmental Studies major. If there’s one thing a graduate needs, it’s a scope broad enough to open a wide list of possible careers and passions.