The universal language of dance 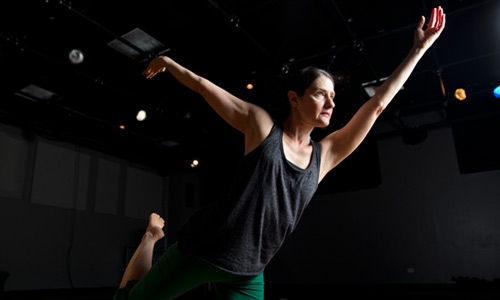 Professor Sandra Mathern discovered that movement was the key to communication with her French-speaking colleagues in West Africa’s Burkina Faso.

How do you mentor someone when you don’t share a common language? Professor of Dance Sandra Mathern discovered the answer when she was invited to an arts festival in Burkina Faso in the summer of 2014.

Two dancers, a musician, and her choreography charts accompanied Mathern to the two-week festival in Ouagadougou, the capital of Burkina Faso, a small land-locked country in West Africa. “It was so beautiful but very rough,” she says. “The dusty red roads were filled with goats, chickens, mopeds and pot-holes — lots of pot-holes. It’s not a place for a casual traveler, but the people and culture are amazing.”

“Working with these dancers from Africa strengthens our own dance program, which emphasizes the African diaspora and contemporary dance. In turn, we can be a good resource for them.”

Mathern was one of a select group of artists who were invited to the Nomad Express International Multi-Arts Festival. Others hailed from the Japan, Republic of Congo, Ivory Coast, Taiwan and Senegal. One of the unique features of the festival is that guest dance artists are asked to mentor a small number of students.

With advisees from Burkina Faso and Uganda, Mathern wasn’t sure quite how she was going to be an effective mentor. English is an official language of Uganda, but Burkina Faso’s language is French and she has just a smattering.

“We both had English-French dictionaries and relied on them, but gesture is such a part of our ‘second-language’— dance — that we were really able to communicate pretty clearly,” she says.

The resulting performances reflected their ability to transmit ideas and even abstract concepts through movement and limited language.

“Our improvisational dance was so beautiful and fluid,” says Mathern. “That kind of result doesn’t happen unless people listen deeply and respond from the same place.”

Mathern hopes to build a long-term cultural exchange with the festival’s directors, and she maintains her communication with her mentees through e-mail, Facebook and Instant Messaging.

“We’re still figuring out what this mentor/mentee relationship is,” she says. “Working with these dancers from Africa strengthens our own dance programs, which emphasize the African diaspora and contemporary dance. In turn, we can be a good resource for them.”