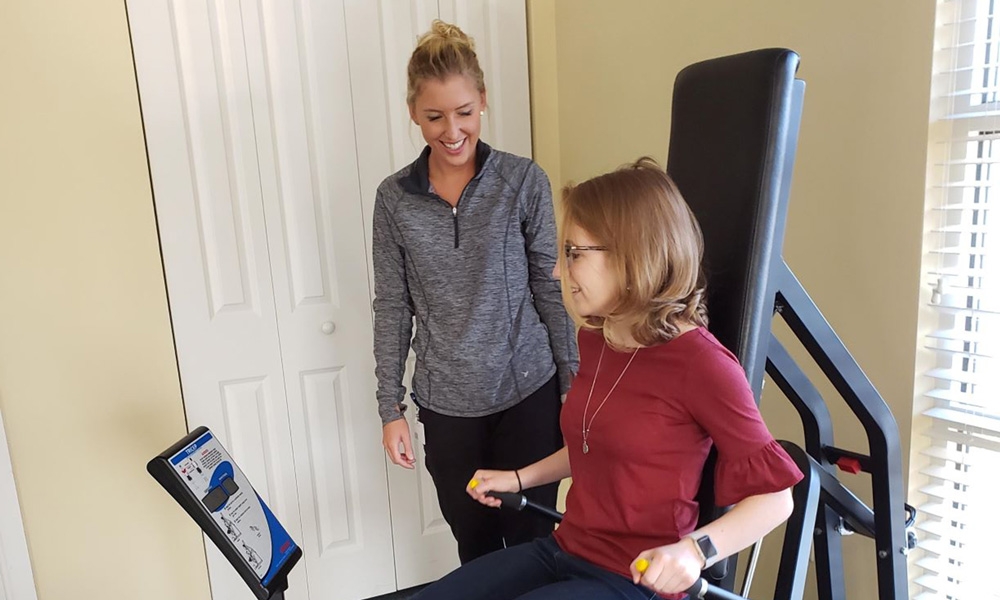 During the spring and fall of 2019, biology major Rebekah Funk ’20 spent many hours at nearby retirement community Kendal at Granville. During her time there, she shadowed occupational therapist Arin Waechter in Kendal’s rehabilitation center — a highly impactful opportunity that supported Funk’s ambition of becoming a registered and licensed occupational therapist.

Waechter says, “I feel that during the past two semesters, Rebekah has seen the whole gambit of services, especially being here in the morning when we are assisting residents with their activities of daily living.”

Educational requirements for occupational therapists are rigorous. First up, a four-year undergraduate college degree, preferably in a field of study such as biology, psychology, sociology, kinesiology, health science, or similar…and students are expected to gain some field experience even as an undergraduate. Funk’s Kendal experience gives her that necessary background.

Growing up with an autistic brother, Funk has been attracted to the field of occupational therapy since she was in third grade. As her brother received therapy, she saw first-hand how important the work is — and was particularly drawn toward pediatric occupational therapy. But her time at Kendal has opened her eyes to other directions.

Tim Schirf, director of occupational therapy at Kendal, says, “Rebekah came to Kendal thinking that she was most interested in pediatric occupational therapy, but while shadowing Arin, she had an ‘Oh, wow!’ experience that opened her eyes to the possibilities inherent in working with seniors.”

Funk notes that she has had “many outstanding professors that have mentored and guided me at Denison. Dr. Hinton, Dr. Kotrosits, Dr. Baker, and Dr. Revesz have had the most impact on my Denison experience, and I am grateful to have had the opportunity to work with them,” she says.

“Although each of these professors is an expert in a different field, I have learned valuable skills from all of them that make me a better academic, person, and eventual occupational therapist. I am beyond appreciative to each of them for helping to shape me into the person I am today.”

Funk also has a long-standing love of horses and is president of Denison’s Equestrian Team, which keeps their horses at a barn in neighboring Pataskala. She and her 18-member team practice English-style riding and compete in four collegiate regional shows per year. Her equestrian interests led to a summer internship through Glade Run Adventures, where children up to age 18 receive some therapy while on horseback.