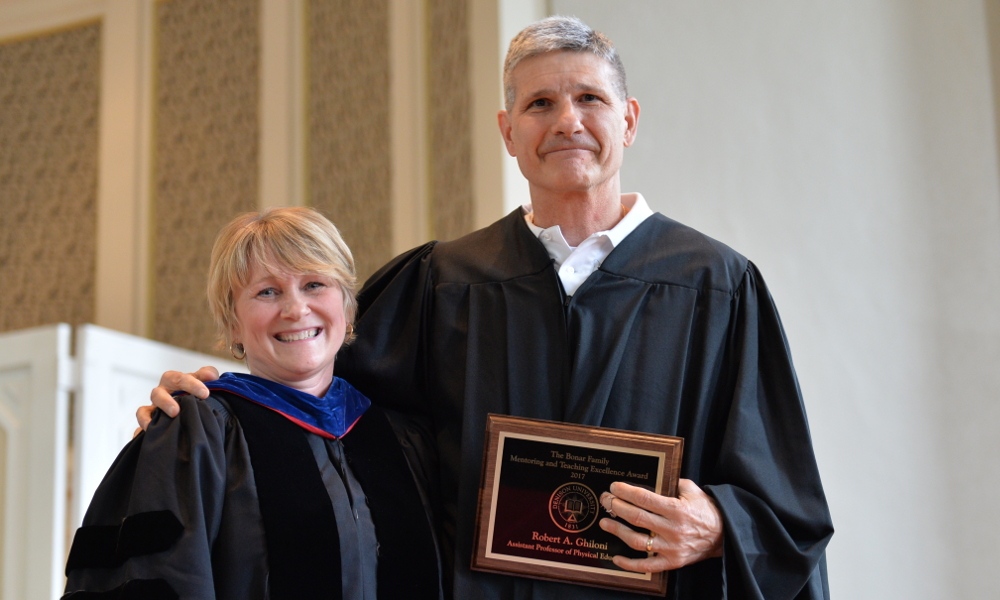 A new award was introduced at Denison University’s Academic Awards Convocation held on Friday, April 21, in Swasey Chapel. The Bonar Family Mentorship and Teaching Excellence Award recognizes exemplary mentoring and teaching by a Denison faculty member, and is funded by Denison Professor Emeritus Don Bonar, his wife Marty and their daughter, Mary Martha, a member of the Denison Class of 2001. The first recipient of the award is Bob Ghiloni, assistant professor of Health, Exercise and Sport Studies, as well as the Denison men’s basketball coach. He demonstrates a clear commitment to outstanding teaching and to the advancement of a liberal education through inspiring, advising and mentoring students throughout their college careers and beyond.

Speaking of Ghiloni, Denison University Provost Kim Coplin noted, “Bob Ghiloni embraces the notion that ‘higher education is about opportunity, personal growth, and community.’ He celebrates the notion that the academic enterprise is rooted in ‘the dispensation of knowledge and the quest for truth.’ In pursuing that quest, Bob notes that Denison students have the opportunity to develop as ‘intellectual, emotional, physical, and spiritual beings’ – that is, as ‘whole persons.’  In his classrooms and through his committed mentorship, Bob emphasizes the cultivation of moral reasoning and ethical values. This is especially true in his practice of regular individual conferences with students in his courses. This engagement extends to his work as an advisor and mentor, where he challenges students to think critically about maintaining integrity throughout their college years and into adulthood. Bob’s emphasis on holistic development also is demonstrated on the field of play, where he seeks to foster athletic community and the development of athletes who will ‘go into the world to be selfless men of character who value learning.’”

“Bob Ghiloni is an ideal member of the Denison faculty, serving as a professor, coach and mentor,” said Don Bonar. “He is available to his students whatever their needs or interests. He cares about their growth, their success in academics and their development as solid citizens of the wonderful planet we share. We are pleased to honor Bob as the first recipient of the Bonar Family Mentoring and Teaching Excellence Award.”

Ghiloni joined Denison as the head men’s basketball coach in 2002. He holds a Bachelor of Science from Ohio State University and a Master of Science from University of Dayton. During his tenure, he has led the Denison basketball program to 13 North Coast Athletic Conference tournament appearances and two NCAC Tournament championship appearances, in 2016 and 2012. Ghiloni ranks third in career wins at Denison with 157. In 2005 he was named the NCAC Coach of the Year.