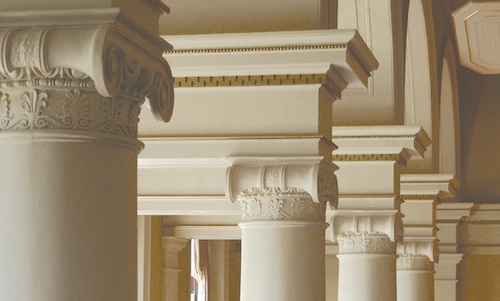 Denison University honored two professors with the prestigious Charles A. Brickman Teaching Excellence award at the college’s Academic Awards Convocation held on Friday, April 15, in Swasey Chapel. Adam Davis, associate professor of history, and Robert Weis, associate professor of psychology, were honored with the 2016 Brickman awards, which are given to members of the faculty who are master craftsmen in the profession and models of dedication to students and to student learning. The recipients have demonstrated a vibrant interest in the learning process, as well as an understanding of teaching as a continuously evolving art form.

In presenting the award to Davis, Provost Kim Coplin said, “Adam is a dedicated scholar and teacher of the liberal arts. His transparent love of his discipline and field informs his deep commitment to inspiring excitement among his students. Adam’s classrooms are places where ideas stand at the center, and where students are charged with a rigorous exploration of the complexity and original intonations of textual and visual materials. He describes his courses as places where students are “empowered to be active learners” by deep engagement with sources and with one another’s ideas. Adam is dedicated to making his courses experiential, through classroom debates, immersion in archival materials, and museum visits. He is also a much sought-after research advisor who provides thoughtful and engaged mentoring to those students seeking to immerse themselves in a time, space, and mentality far from their own. Adam’s advising and teaching make vivi d the elusive traces of the past.

Davis joined the Denison faculty in 2003 and is the William T. Utter/Clyde E. Williams, Jr. Professor of History. A historian of medieval Europe, Davis has wide-ranging interests in medieval church reform and religious life, medieval charity, and the history of learning. He teaches courses on late antiquity; medieval Europe; the Crusades; Jews and Christians in the Middle Ages; the twelfth-century Renaissance; religion and society in medieval Europe; and the history of the liberal arts. His research explores the interplay between medieval ideas and institutions, social values and practices. His first book, “The Holy Bureaucrat: Eudes Rigaud and Religious Reform in Thirteenth-Century Normandy,” explored the impact of a learned elite on the daily life of the medieval church. Davis is currently completing a new book, “The Economics of Salvation: Charity, Commerce, and the Rise of the Medieval Hospital,” for which he received a year-long fellowship from th e National Endowment for the Humanities for 2014-15. Davis holds a Bachelor of Arts from Yale University and a master’s and doctorate from Princeton University.

In presenting the award to Weis, Provost Kim Coplin said, “Bob considers himself to be a pragmatist and an empiricist who seeks to ‘do what works based upon the available data.’ His teaching is an ongoing pursuit of ‘integrating the world of practical affairs and the world of ideas,’ and his teaching is informed by the mission of helping students to gain understanding of how those worlds interconnect. Bob has developed labs that give students a chance to ‘practice behavioral research methods and data analysis first-hand,’ including explorations of the ways in which implicit attitudes and unconscious bias inform individual actions and social engagement. As students master fundamental skills in labs and coursework, he also seeks to inspire their independent quest for knowledge by supervising multiple independent and summer research projects. His approach to teaching recognizes that while ultimately relatively few of his students might work in his field, all will be called to “be liberal artists, that is, to gain an understanding of themselves in relation to others in the world.”

Weis holds a Bachelor of Arts from University of Chicago and a doctorate from Northern Illinois University.