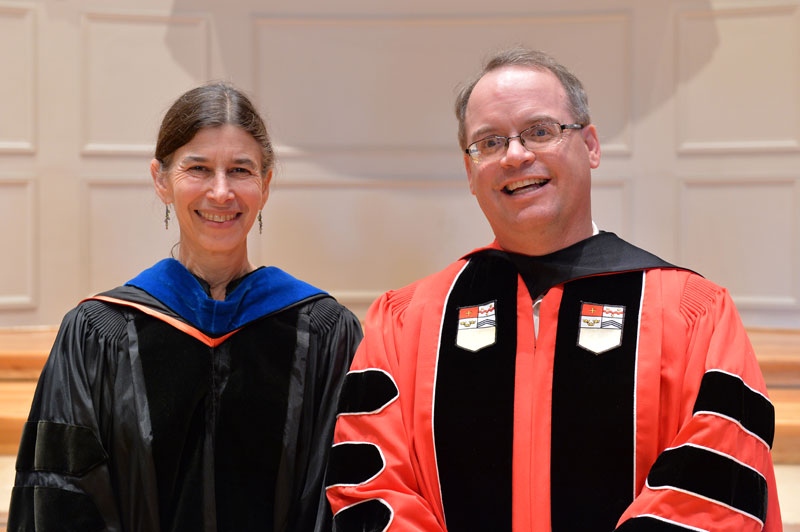 Denison University honored two professors with the prestigious Charles A. Brickman teaching excellence award at the college’s Academic Awards Convocation held on Friday, April 24, in Swasey Chapel. Steven Doty, professor of physics and astronomy, and Linda Krumholz, professor of English, were honored for their consummate dedication and commitment to their students.

In presenting the award to Doty, Provost Kim Coplin said, “In an effort to better his teaching skills and to challenge his students, the Steve is known at Denison for his constantly changing approaches to teaching in the classroom. He looks to provide opportunities for his students to examine the ‘Why’ of their work in the classroom, in an effort to expand their knowledge beyond the classroom. Steve’s use of technology to support his teaching has enhanced his students’ ability to learn, to adapt their knowledge to new situations, and to communicate it effectively. His commitment to the importance of advising was enhanced after serving as a Posse Mentor, and he has expanded his advising role to all his advising students based on that model.”

Doty joined the Denison faculty in 1999. As well as being a faculty member in physics and astronomy, Doty is the director of the pre-engineering program at Denison. He teaches courses at all levels of physics and astronomy. Recent courses he has taught range from “Introduction to Astronomy” to “Electricity and Magnetism,” and have included experimental courses such as “Life, Death, and Aliens,” and “From the Sands to the Stars.”

While Doty’s bachelor’s, master’s and doctorate degrees from Rensselaer Polytechnic Institute are in physics, much of his research is in computational astrophysics. In particular, he has worked on self-consistent modeling of both high- and low-mass star-formation, with an emphasis on the process by which these forming stars produce disks and planets. Doty has published over 58 international journal articles, and given more than 80 national and international presentations. He has received research support from NASA, JPL, and the Dutch NSF. Doty is a team scientist on the WISH Key Program on the Herschel Space Observatory, a joint NASA-ESA mission. He also has been part of observing teams with the Gemini Telescope in Hawaii. Aside from his astrophysics work, Doty also does work in everyday phenomena and physics education research.

In presenting the award to Krumholz, Provost Kim Coplin said, “Linda is well known at Denison for her passion and enthusiasm for teaching and the hopefulness in the future that comes to her from intense classroom discussions and the discovery of new ways of thinking. She has taken great care to provide a comfortable atmosphere in the classroom which allows her students to share their ideas and opinions about the emotional, psychological, intellectual and political complexities of life. Students praise her ability to manage discussions, to help them shape their ideas into clear arguments — often while stepping outside their comfort zones and ultimately helping them to look at things in a different way. Linda’s passion also extends to her extensive service to the college, having served not only in the governance system, but also in vital campus programs that have increased the dialogue and awareness of campus diversity issues.”

Krumholz joined the Denison faculty in 1992. She is the director of the Black Studies Program and teaches courses in twentieth and twenty-first century African American and Native American literature as well as in Ethnic American literature, literary theory, and composition.

Krumholz is interested in the ways fiction can transform social representations and beliefs about race, history, economics, power, and cultural identities. Her research focuses on novels by contemporary African American and Native American authors such as Toni Morrison, Leslie Marmon Silko, Louise Erdrich, and Paule Marshall. In her recent work, she also considers how teaching can transform U.S. conversations about race. Her essays have appeared in “Ariel,” “Contemporary Literature,” “African American Review,” “Modern Fiction Studies,” “Western American Literature,” and various anthologies. Krumholz earned a bachelor of arts from Reed College, and a master of arts and a doctorate from University of Wisconsin, Madison.