Half-Burnt: The story of Ojibwe Chief Hole in the Day 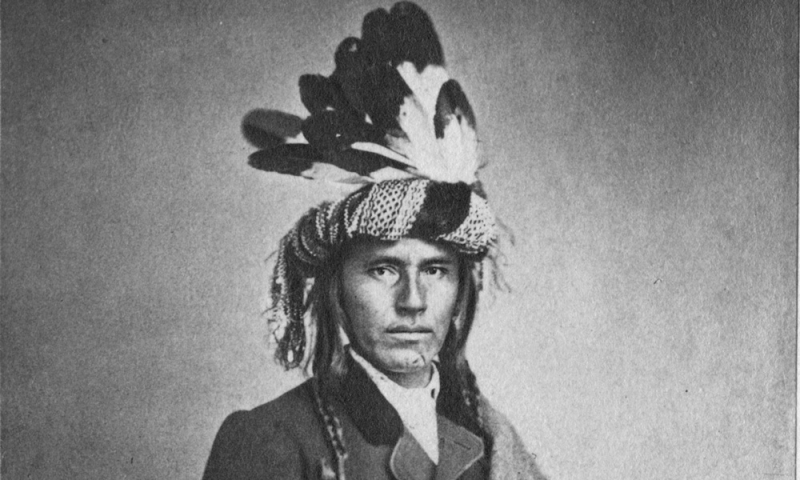 Chief Hole in the Day

Peter Grandbois, associate professor of English at Denison University, follows the life of Ojibwe Chief Hole in the Day in his new historical fiction novel Half-Burnt, a glimpse into a Native American story told outside typical “white” conventions.

Half-Burnt rejects previous narratives that paint Native Americans into white, western boxes of “victim” or “warrior,” offering instead a contemporary vision of humanity’s place on this sacred earth, one that transcends any notion of a “pure” culture. This is a vision that seems particularly relevant to a modern world where the standoff at Standing Rock over the Dakota Access Pipeline has similarly been characterized as a desperate battle by a dying people to protect the land that was taken from them — when the reality is the people and the land have been one all along.

Half-Burnt is Grandbois’ most historical novel. His inspiration for writing the book stemmed from his genealogical research into his own Native American bloodline. Although he knew the basics of his ancestry, he came across a letter from a Metis priest to a bishop that talked about the deathbed conversion to Christianity of Grandbois’ Ojibwe great-great-great-great-great grandfather, He Who Treads the Earth in Summer.

Grandbois was curious about the conversion and what events led to it. His ancestor also was a war chief for Hole in the Day, who was mysteriously murdered.

During his research, Grandbois mulled over the question “What does it mean to betray the people we love?” This question, his ancestry and the mystery behind Hole in the Day’s murder prompted him to write Half-Burnt.

For Grandbois, writing this novel proved challenging. “It’s hard to find the truth when researching people whose histories have been erased and rewritten by colonizers,” he says. Grandbois’ other novels tend to be more imaginative, and he had to reign-in that side of him and stick to the facts.

“I was writing about a culture and a time that I’m not part of,” he says. “This requires active imagination and empathy. I believe it is important to write outside of your culture, but we have to be sensitive, do the research, and listen.”

While learning about his ancestry and their role in history, Grandbois was surprised at the amount of racism that existed within the Ojibwe. Native Americans are often stereotyped as either the “evil savage” or the “noble savage.” Grandbois wanted his novel to fight against these stereotypes and stress that we’re all capable of doing good and bad things.

For Grandbois, everything he writes influences his next projects. A spiritual component infuses all of his books, which in turn influence his poetry.