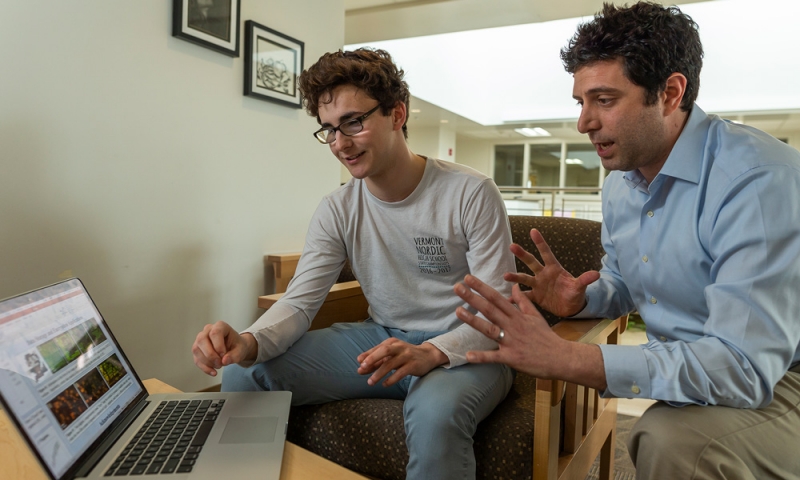 Denison University student Hoke Wallace ’21 has been selected to present his research in Washington D.C. as part of the prestigious Posters on The Hill program, organized by the Council on Undergraduate Research. Wallace is one of only about 60 presenters at the annual undergraduate poster session on Capitol Hill and its related activities, in which members of Congress and their staff members learn about the importance of undergraduate research through talking directly with the student researchers involved in these programs.

“The idea is like what you would see in polarized sunglasses, except the material is organic and re-alignable,” says Wallace. “We can align the columns in films of these liquid crystals in a certain orientation using a laser-induced thermal gradient. The aligned regions in films of DACLC can absorb or transmit incident linearly polarized light, depending on the angle of polarization relative to the angle of columnar alignment.”

“So, you set up a data storage scheme whereby one ‘bit’ of data is represented in an arbitrary base value. We store it in the material as a region of DACLC with columns aligned at an angle corresponding to that base value. Then we use light transmittance data to determine how the columns in a region are oriented and read out the stored data,” Wallace adds. “And we demonstrated that this actually works with a real message — collaborators at Sandia National Labs encoded a message in a film, which we decoded.”

Wallace conducts his research under Associate Professor of Chemistry Joe Reczek. It is a continuation of research by Maddie Van Winkle ’18, who was awarded a National Science Foundation fellowship, to fund three years of her post-graduate work at U.C. Berkeley. Reczek is motivated by the success of his students as much as by the research itself. “Getting to work directly with Denison undergraduates on truly exciting new science, while also helping to inspire and launch the next generation of scientific leaders like Maddie and Hoke, is just fantastic!”

“Dr. Joe’s guidance has been instrumental,” says Wallace. “Also, Dave Burdick in the machine shop in Olin Science Hall continues to be super valuable in helping us modify our laser-writing setup to give it greater control over items like focal distances and angle of laser polarization.” 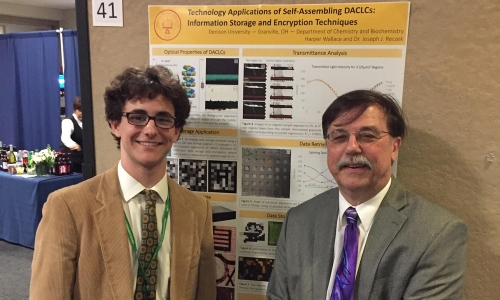 Hoke Wallace ‘21 with John Mateja, the president of the Goldwater Foundation

Denison’s Lisska Center for Scholarly Engagement and members of the faculty encourage students to apply for the Posters on the Hill (POH) program. POH is a signature event for the Council on Undergraduate Research (CUR), which attempts to raise nationally elected officials’ awareness of undergraduate research. On a related topic, Denison was recognized by CUR for the college’s excellence in undergraduate research.

UPDATE: While at Capitol Hill, Wallace, who has been awarded a prestigious Goldwater Scholarship, had an opportunity to meet John Mateja, the president of the Goldwater Foundation.

Burton Hall
Burton Hall was home to the Department of Music.