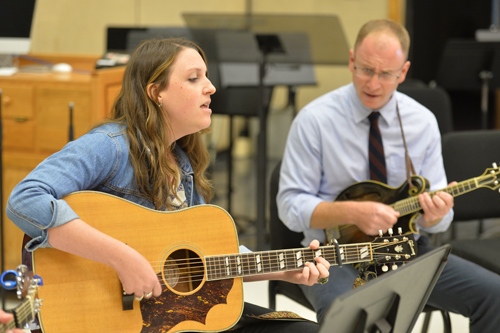 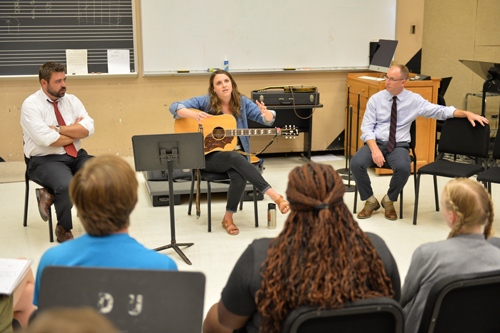 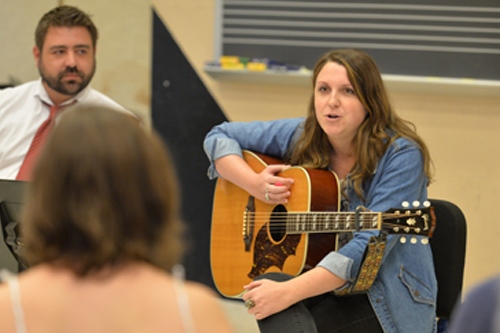 What do you get when you combine a creative writing major with a passion for music? In the case of singer/songwriter Caroline Spence ’11, you get the grand prize in American Songwriter magazine’s 2013 lyric competition, first place in the Kerville Folk Festival songwriting contest, and recognition from Rolling Stone magazine as one of the “10 New Country Artists You Need to Know: Spring 2015.”

Spence paid her alma mater a visit in the fall of 2015 to offer a songwriting workshop. “Really, the best way to get good at songwriting is just to do it,” she said. “After graduation, when I was interning at Compass Records and wondering how I could make a career out of songwriting, I tried to make myself a student of songwriting. I listened to the best artists I could and was always writing.” After her first tour, she wrote “Whiskey Watered Down,” “That was the first song I really felt good about,” she said. “It made me a little uncomfortable to sing it, and I think that’s important. There are truths you wouldn’t say in regular conversation that just come out in a song.”

The process of writing a song that can communicate those truths is not an easy one. “One song, ‘Mint Condition,’ took me six months to write,” Spence confided. “The first two verses came out together, and the third one took forever. But you have to push yourself until it feels done.” “Mint Condition” won her that Songwriter magazine competition.

Throughout the workshop, Spence made no secret of the ways her songwriting borrows from her creative writing background. “In the beginning, I didn’t think to put music and creative writing together since I had always accessed them so differently,” she said. “But poetry and songs aren’t so different. You have limited real estate, and so every word has to be just right. A song doesn’t feel done to me until I’ve read it and asked ‘What line wouldn’t Ann Townsend like?’”

Townsend, a professor of English appreciates Spence’s perspective as well, “As a senior creative writing major, Caroline always demonstrated real awareness of her audience; it's no surprise to see her thoughtful intentionality applied so successfully to her songwriting and performing. And I love that our conversations continue to resonate with her, even from afar.”

When asked how it feels to present such intensely personal material to an audience, Spence compared the experience to opening up to a friend. “You open up and show yourself, only to find that there’s someone right there with you, that there’s someone else who feels the same.”

As for co-writing songs with other songwriters at a publishing company, Spence again hearkened back to her creative writing days, this time with a laugh: “It’s a lot like a writer’s workshop. All the practice I got at Denison gave me great diplomatic skills, so I’m able to be really polite when commenting on other people’s work.”