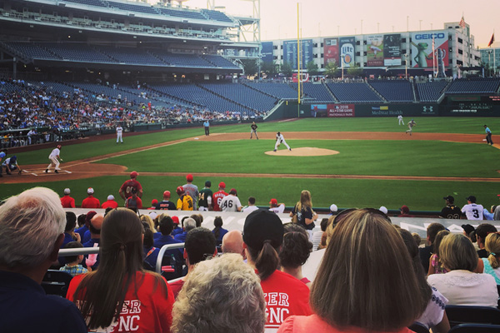 Some students are so acclimated to life on college hill that it seems natural to relocate to another hill for the summer — Capitol Hill. This year alone there are more than 20 Denison students interning across Washington D.C., including congressional internships through Denison’s Lugar Program.

With a growing number of influential alumni in the nation’s capital, and a rotating base of talented undergrads, it’s not surprising that Denisonians cross paths there — sometimes on purpose, and sometimes unexpectedly.

Earlier this month, Lugar scholars Meghan Pearce ’16 and Constantine Politis ’16 went to Nationals Park stadium for the annual congressional baseball game, where they exchanged greetings with Congressman Robert Dold Jr. ’91 of Illinois, among other Denison connections…

Constantine Politis ’16 and I are both students in the political science department’s Lugar Program, and we’re spending the summer in D.C. — he’s working with Rep. Tim Murphy (R-Pa.) and I’m in the Communications office of the National Republican Congressional Committee, where I get to set up for video and audio recordings for Members, review press releases, do research on campaigns, and complete various campaign related projects.

We met up on the Metro to head to the congressional baseball game together— tickets were only $10! On our way there, we ran into Anne McKiterick ’16, who’s interning in the Archives of the Supreme Court. She was also on her way to the game.

When we got there, we sat with Rep. Murphy’s office on the Republican side and Constantine pointed out Rep. Bob Dold ’91, and mentioned that he went to Denison. Dold ran back to the dugout after a long stretch, where we grabbed the chance to shout hello to him. He looked up and we told him we were students at Denison! His face lit up and asked us what year we were (both rising seniors) and if we were in a Greek organization (I’m in Delta Gamma).

After a while we said good luck, waved goodbye, and told him to come visit the Hill in Granville! When we sat back down, I looked at his Wikipedia page (always a good source) and found out that he had been the DCGA President — I’m the outgoing president, so that made the meeting even more special. Not to mention the fact that Nancy Pelosi, John Boehner, and President Obama and the First Lady were also in the stands!

I needed to leave the game early to get back home (I’m staying with my Denison friend Shannon Casey ’16 in Virginia) and as I was leaving, I ran into another Denison friend, Alex Haddad ’17 who is interning with Jim Renacci (R-Ohio-16). We hugged and agreed to meet up later. Then I got a text from my friend Rohin Daswani ’15, who is interning with the Woodrow Wilson International Center for Scholars and also happened to be at the game. It was a crazy day of Denison connecting, but Denisonians are connecting all over D.C. this summer.

For instance, Lindsey Studebaker ’16 is interning for The Lugar Center, which is founded by and run by former senator Richard G. Lugar ’54, and my friend Hunter Janness ’17

is interning at Forbes-Tate, a lobbying firm that was founded by Denison Hilltopper Alumni Jeff Forbes ’87 and also employs several other Denisonians.

There are almost 20 other Denison students in the area who connect and meet up via a Facebook page that one of them created. And there was a recent D.C. networking event featuring jazz at the National Gallery of Art for alumni, friends, and current students to meet.

There are so many exciting opportunities! I’m thankful to be here this summer, and for all of the Denison support.