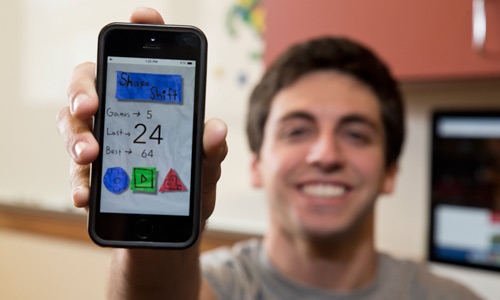 When Michael McKinney ’15, a biology major and computer science minor, asked his older brother what it would be critical to do for him to stand out in the technology industry, his brother told him he would need to produce a project of his own.

McKinney, who says he spends a lot of time on his phone, knew he wanted to develop an application for the iPhone. He was inspired by his own doodles to create a game called Shape-Shift.

“I doodle a lot and I have a pen that has four colors, so I thought, ‘I’ll just turn this into a game, doodling shapes together,” he said.

According to Apple’s App Store, “Shape-Shift is a quick, challenging shape matching game with a quirky, hand-drawn design…Tilt and touch to frantically avoid the wrong shapes. Shape-Shift to match the background and catch the shapes you want.”

To complete this independent project, McKinney upped his coding and computer knowledge. He learned programming languages Objective-C and iOS 7 SpriteKit, used Photoshop to turn his doodles into images, and rocked the GarageBand app to create the background music.

McKinney began the project during his semester studying in Costa Rica.

“If you can address big problems and shrink them down into smaller building blocks, you’re going to have easier time presenting complex ideas.”

“There is not a lot of tech stuff in Costa Rica, so I had computer code withdrawal… I just started doing it on my own,” said McKinney. “In a tree house in the rainforest, I started coding the game.”

After returning from Costa Rica, he continued coding into the summer and began to run into the challenges of application development.

“It came together slowly; every step of the way had hurdles. Everything you think is going to be easy, even just putting my name at the top of it for example, is not easy,” he said.

McKinney says he learned to value more aspects of teamwork after recognizing the complexity of this project. “Everything breaks. There is a lot of problem solving that goes into it, with lots of different elements that go into each problem,”

After the initial hurdles were cleared, McKinney distributed it for testing. When he felt Shape-Shift was ready, he sent it to Apple’s App store, where they tested it and then made it available for download.

Above and beyond his computer science knowledge, McKinney especially relied on writing skills throughout the stages of his project.

“Knowing how to deliver a big message in a very concise package is difficult, but I think that skill is developed in areas that aren’t just computer science,” he said. “If you can address big problems and shrink them down into smaller building blocks, you’re going to have an easier time presenting complex ideas.”

Jessen Havill, one of McKinney’s teachers and a professor of computer science said, “It is super impressive that Michael took the initiative to create this cool game on his own, building on what he learned in his computer science classes. He obviously also channeled a lot of creativity, and learned a bunch of new skills that will be very attractive to employers.”

Jeff Thompson, associate professor of biology, said, “In my genomics class, although it’s not an expected part of the course, Michael has been bringing his computer science expertise into the major lab project that the class is working on this semester.” He added, “I've been impressed by his initiative in bringing the biology and computer science together.”

McKinney is already applying for jobs in consulting and in the software industry, working with usability and quality assurance.