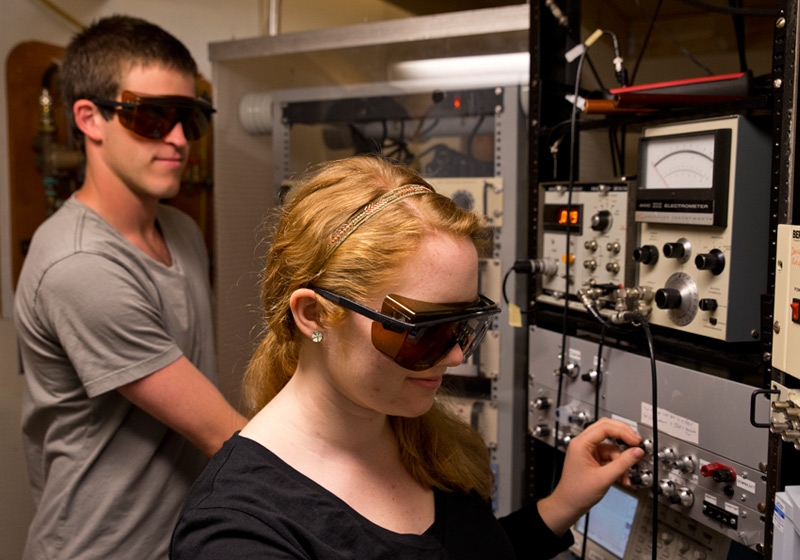 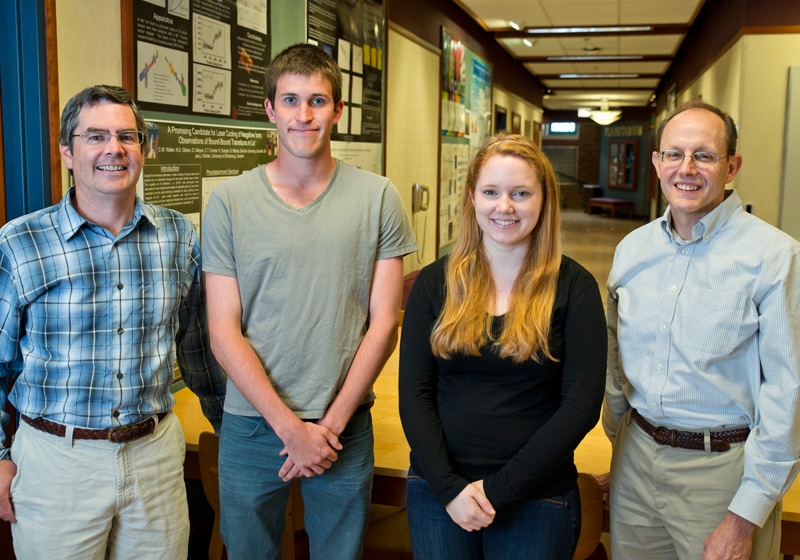 Antimatter — the doppelganger partner of matter — is notoriously difficult to study, but a new discovery about negative ions may promote better understanding of this enigma.

Scientists have been using lasers to cool both neutral atoms and positively charged ions to temperatures near absolute zero for more than 30 years. But there has not been a workable scheme to laser-cool any negatively charged ion (an atom with an additional electron) — until now.

“…that I could research laser cooling at this early stage in my career is an amazing opportunity.”

“On this particular project, the challenge of how to interpret our data proved to be a pretty involved puzzle,” said Clay Crocker ’13. “Part of what made the work so exciting for me was that no one in the world knew how to solve it. We really were exploring some portion of the universe that nobody had ever seen before.”

In order to do this, Gibson, Walter and their team use a laser to measure transitions in a negatively charged ion. The laser compels the ion to strongly absorb light and then return to its original state.

Laser-cooling of lanthanum negative ions could enable many important applications, including improving tests of how gravity affects antimatter. In sympathetic cooling, ultracold ions are collided to bring antiprotons to a near standstill so they can be studied.

Crocker is using lasers to cool positive ions at an atomic physics lab at the Joint Quantum Institute with the University of Maryland and the National Institute of Standards and Technology (NIST). “It has been really neat to see how so many of the skills I acquired through my work at Denison have been applicable here as well.”

Kristina Dungan ’15, a physics major who interned with NIST over the summer, was a member of the team that produced this research. She said, “Laser cooling has many important applications throughout the sciences and the fact that I could research laser cooling at this early stage in my career is an amazing opportunity.”

Walter and Gibson have just received a more than $300,000 grant from the National Science Foundation (NSF) to pursue their negative ion research here at Denison and to travel to perform experiments at Lawrence Berkeley National Lab over the next three years. This represents the duo’s seventh straight successful award from the independent federal agency, whose mission is to “to promote the progress of science; to advance the national health, prosperity, and welfare; to secure the national defense…”

In other work with lasers on campus, Steven Olmschenk, assistant professor of physics, is conducting cutting-edge research that could potentially predict the future of an unbreakable encryption. He also has been awarded multiple grants for his research.